Facebook Twitter Copy URL
Copied
Rappler reports from New York: An army of supermodels, A-list muses, a pop-up store and Missy Elliott come together for the launch of the latest H&M designer collaboration

Aside from making globally successful fashion collections, designer Alexander Wang knows how to throw an event.

The party to celebrate his collaboration with H&M was no exception.

With a track record of turning New York’s Highline into an amusement park for his birthday, complete with bump cars and a carousel, and a Busta Rhymes-headlined Manhattan bash near the city hall. Wang’s events live by his philosophy of “Fashion needs to be fun.”

For his H&M collection launch, the Armory at Hudson transformed from a professional track loop to fashion runway. In the middle of the stage loomed a multi-level edifice and bleachers replaced the conventional NYFW tiffany chairs.

The show opened to a quick-cut video countdown. But unlike the surreal or atmospheric, high art fare that designers would show prior to sending down models, this one was in-your-face and inspired by The Matrix, with parkour and an electronic, Inception-inspired soundtrack thrown in.

“The idea of active wear and performance wear has always been something that’s been close to me and my inspiration process,” explains Wang during the red carpet interview, “and I knew that this collection could really be something exciting for everyone.”

View the photos from the show here:

After the heart-racing video, pulses accelerated further via a gravity-defying parkour performance. Four artists bounced around the multi-level setup, performing acrobatics and treating the concrete structures like another trampoline. With its combat gear aesthetic, the show revealed the thinking behind the collection – it’s an urban jungle out there and we best be ready. The collection sported (pun intended) high performance innovations, a first for H&M’s designer collaboration. The clothes are not just nice to look at, or purchase-worthy for the name of Wang, but are functional, made to perform.

The arsenal is clearly inspired by the elements of sportswear: from dry fit to compression, neoprene foam and woven silver mesh. The outerwear are winter-proof and the windbreaker is water-resistant. Wang explains, “For me, to be part of the H&M family and to work with them was so exciting. But also at the same time, we wanted to approach it differently.  These idea of everyday items or things…” But made designer.

Leggings, shorts, parkas – items that everyone has and needs but amped with design and tech. It’s the urban uniform evolved into a daily fashion statement.

In its official statement, H&M describes the collection as something “to be worn on the street, in the gym, at the club – the way people live their lives today.”

Probably why even wizened fashion folk threw all sense of bored cynicism out the door to raid the pop-up store.

After the show, the stage doors were opened, leading to the sale of all of the items in the collection.

The fashion folk found their competitive spirit, with A-listers and even celebrities dashing around the closets, snapping up as many of the pieces as they could.

The checkout line. If this is any indication of the demand on Nov 6, camping might be required. #ALEXANDERWANGxHM pic.twitter.com/hvEqSIe9xg 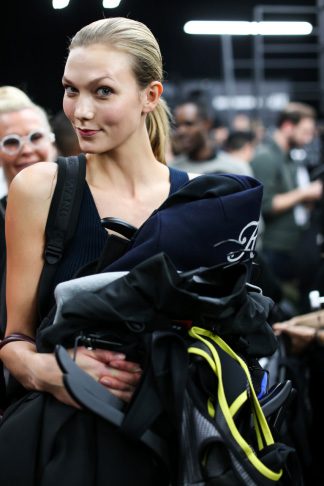 Even supermodels Karlie Kloss and Joan Smalls were spotted buying the collection. Clearly, all beings are equal with Wang. Surprisingly, aside from the apparel, some of the most popular pieces were the curio ones: boxing glove keychains and whistles.

The check-out line snaked all around the perimeter of the store and while one could hear hushed whispers of tired arms from carrying so much merchandise, there were no complaints as the line inched along.

Get your freak on

True to being a child of the 80s, Wang chose hiphop icon Missy Elliott to end the night.

Showing that she is still a class of her own, Elliott performed some of her greatest tracks “Get ‘Ur Freak On,” “Pass that Dutch” and “Work It.”

Star sightings were not just onstage, as film actors Eddie Redmayne (who is about to play Stephen Hawking in the anticipated biopic The Theory of Everything), Dakota Fanning, Jessica Chastain, and Kate Mara (of House of Cards) were also seated in the front row.

They were joined by music and style icon Mary J. Blige and actor Justin Theroux and Orange is the New Black star Natasha Lyonne.

Wang finishes, “You know, fashion should be fun. And especially in this context, we just wanted to have a good time!” And he did, as the designer jumped onstage and ended the night dancing alongside Elliott.

The Alexander Wang x H&M collection will be available online and in 250 stores worldwide on November 6. H&M Manila just opened its doors and will be carrying the collection. View the entire collection and Philippine price points here. -Rappler.com