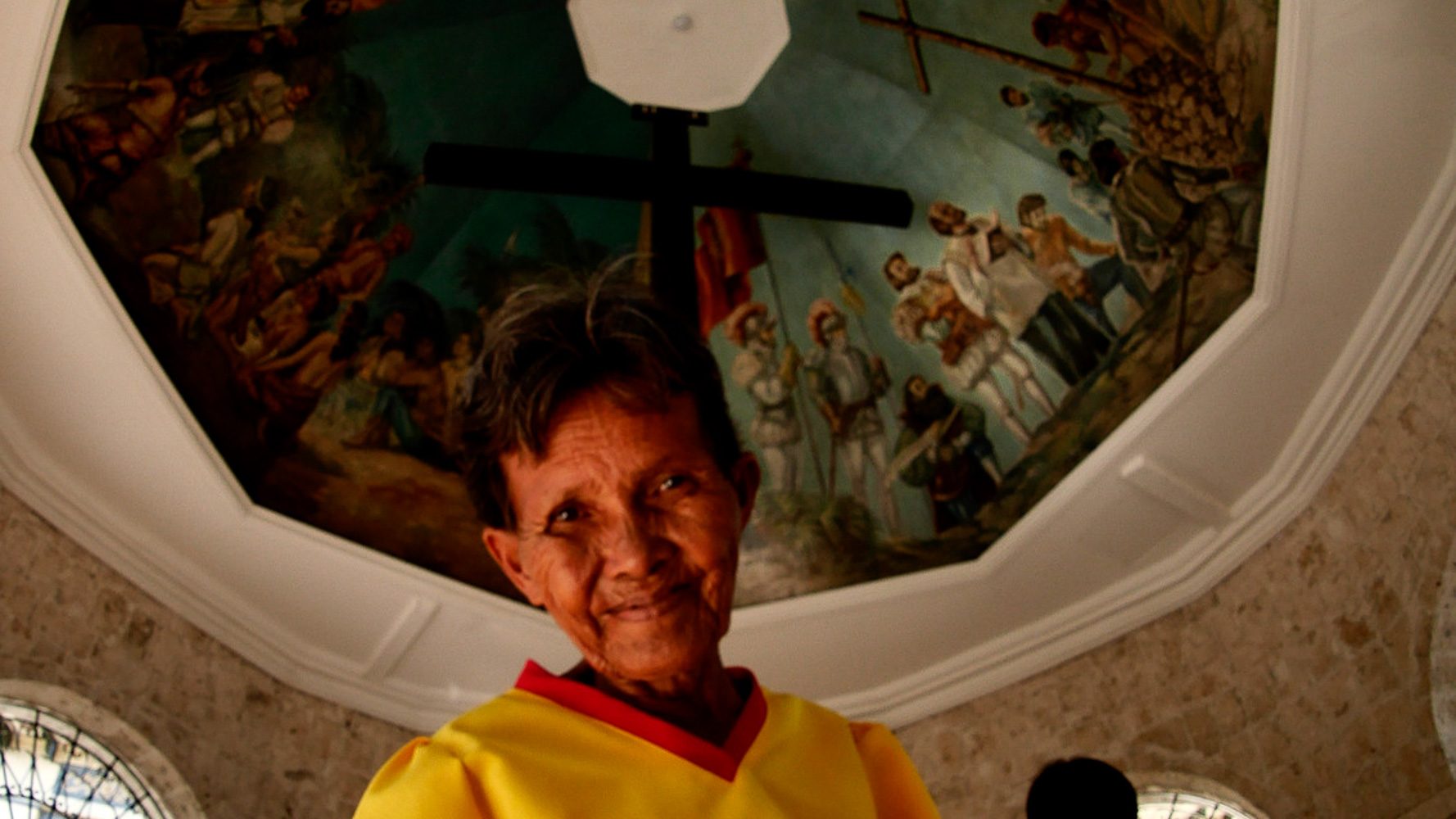 Blue is for travel and career. Yellow for health. Red for love. Pink for happiness. Green for success.

Nanay Claudia – who stood somewhere between 4’6″to 4’9″ – explained the meaning behind the colors of the candles she was holding on her right hand. A green plastic bag filled with candles dangled on her left arm, a black bag belt wrapped around her waist. 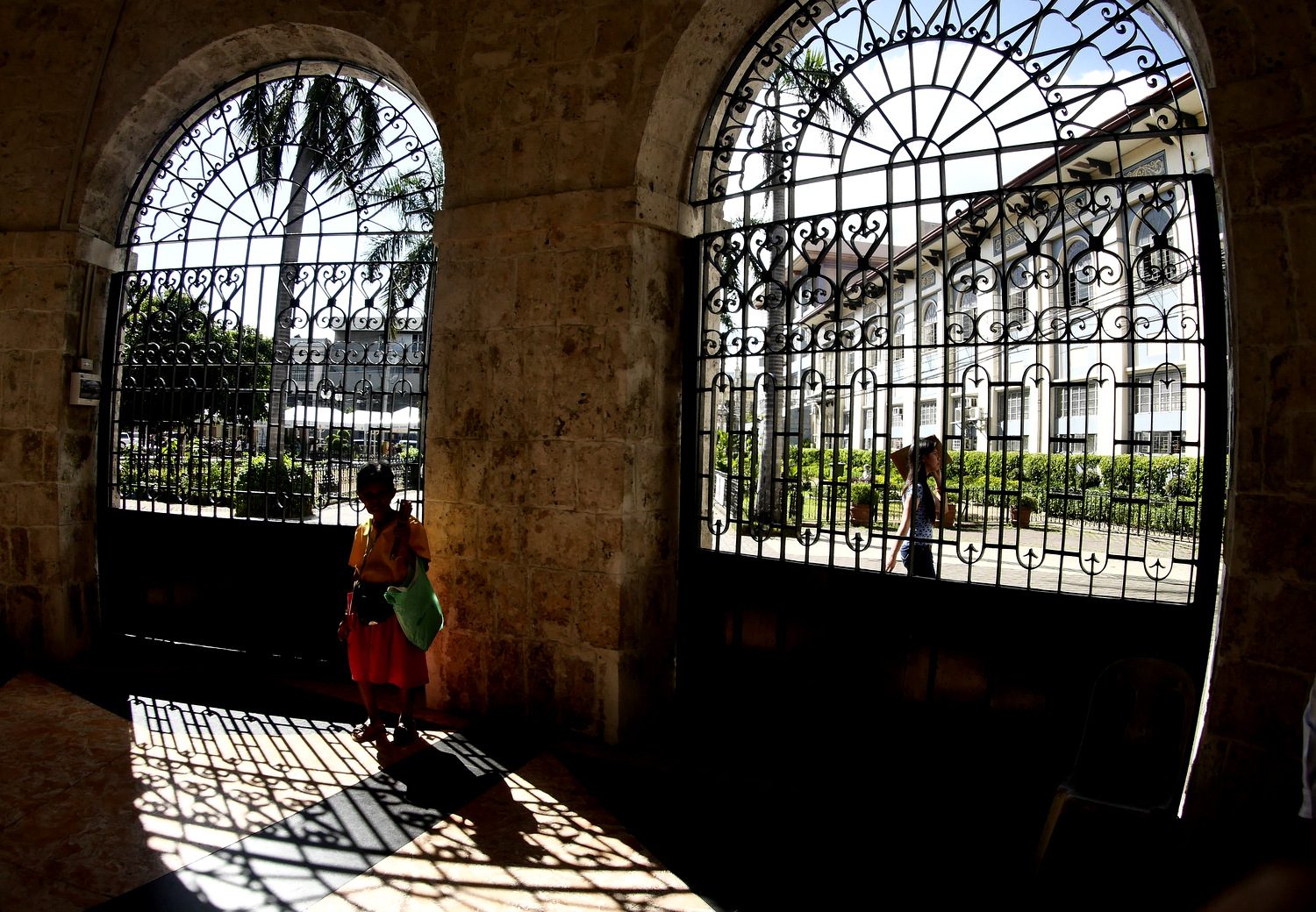 She talked to me in English, thinking I was a foreigner, Korean or Japanese perhaps, whose travel itinerary to Cebu included the Magellan’s Cross: to gaze up and admire the colorful ceiling that depicted the conversion of our ancestors to Christianity or check this historical site, take a selfie, and move to the common tourist trail, without paying much attention to the historical value of the place. What matters is: a place in the bucket list is ticked off.  (READ: Cebu: Tales of a city-walker) Upon learning that I am a Cebuano, Nanay Claudia asked if I was a Catholic.

“No, I’m not,” I answered in the language we both speak, with a tone of playfulness that my Catholic mother would despise. I have long distanced myself from the Church: the kind of Church who does not have equal rights for men, women, and gay people, who bans safe sex; whose double standards are more felt in the countryside – the biggest chunk of our archipelagic country. I am a pagan in a family of Catholics, whose altar of relics is an integral part of the living room.

I do believe in the existence of the “right,” not self-righteous, Catholics, and they are some of the best humans that I have ever met.

And I believe in Pope Francis.

Upon hearing my answer, Nanay Claudia – in her bright yellow top and red skirt that almost swallowed her small frame – left and walked around, looking for someone who was kind and religious enough to pay for the colorful candles.

Other vendors, the ones in their 40s, had an edge over her. They helped visitors in taking the visitors’ photos; they knew the right angle to get their faces, the cross, and the ceiling in the frame. Out of goodwill, these visitors would buy the candles from them. Nanay Claudia, old as she was, did not know how to operate smartphones.

But like all candle vendors, she would dance and murmur a prayer for a bundle of candles bought. She is 71 years old and has been dancing and murmuring thousands of prayers for the past 31 years. Along those years, she bore 7 kids, the eldest is now 41, the youngest 27, whom she said, loved music, was single, and lived with her.

When asked why she decided to become a candle vendor, she answered, “there is no other way out.”

The 2013 7.3-magnitude earthquake brought Bohol to its knees and shook Cebu’s. The belfry of Basilica Menor del Sto. Niño toppled, the nearby kiosk and the Magellan’s Cross itself cracked. The belfry was cordoned with tarp images of the crowned baby Jesus. (READ: Heartbreaking: 10 iconic churches in Bohol, Cebu damaged)

The pavilion where the wooden cross encasing the original of cross was temporarily closed; the cross was braced by 2×2 wood. (READ: Bangon, Bohol: Vacationing in the post-disaster province)

Last March 3, the country’s president, Benigno Aquino III himself, attended the turnover and the blessing rites (which was officiated by Cebu Archbishop Jose Palma) of the newly restored Magellan’s Cross and Sto. Niño’s belfry. The National Historical Commission of the Philippines fully funded the restorations of Cebu’s heritage sites. One news piece said the cost of the “belfry restoration reached more than P30 million and P3 million for the Magellan’s Cross.” Nanay Claudia’s candles cost P10 each, crumbs compared to the millions spent in the building and restoration of these heritage sites.

Nanay Claudia, if asked, could retell the story depicted on the ceiling: Magellan and his men arrived in 1521, converted Rajah Humabon and Rayna (Queen) Juana, planted the Cross of Tindalo Wood on the very site it stood now.

In the mural Jess Roa and Serry M. Josol painted, there were two loin-clothed men, one kneeling before the cross, the other fixing or holding the cross and kneeling at the same time. I found their position too awkward, too contrived, too staged. Everyone – Magellan, his men (who all looked too unrealistically comfortable in their combat uniforms in a tropical island), and locals of higher position, I supposed – looked on.

And oftentimes, our written history felt like this: too clinically staged, always the black and the white, the conqueror and the conquered, the what-who-when-what. But the gray areas – the wide spectrum between black and white – are where our real history, mostly unwritten, resides.

Gray matters like, “were we really that easy to convert?”

Not on the ceiling was Magellan’s downfall: when the stereotypically muscular Lapu-lapu or one of Lapu-lapu’s men killed him. (Some said, why glorify Lapu-lapu when he was not the one who killed Magellan?) To win the battle, according to the talks among drunk bystanders some years past, Lapu-lapu and his men threw human feces to white men disembarking from the ship. This story can be as valid as the brief story we learned in history classes on our elementary days.

When I asked Jonathan about the tour around the city, he answered that it was different because “Negros was never colonized.” He is a fifth-year mechanical engineering student – who together with his fellow students from Technological University of the Philippines Visayas – toured Cebu City and industrial companies.

My Cebuano pride was somewhat bruised that I backed off a bit and asked, “Oh, really?”

Magellan’s Cross, Basilica Menor del Sto. Niño, and Fort San Pedro are 3 of the destinations Cebu students from all over the Philippines like Jonathan’s group visit for the so-called cultural immersion.

What Jonathan seemed to want to say was that Cebu, unlike Negros, was the chosen one – though accidentally – by the colonizers.

Our downtown is a conglomerate of confusing architectures: a mirror of who docked to our shores and stayed long or long enough to forever alter our ways. Ironically, not far from these million-worth heritage sites are the very poor who sleep on sidewalks with their pet dogs, parents whose kids do their homework on the pushcart, residents whom I shared a table with for dinner who warned me to remove my glittering necklace before jaunting around the mythically dangerous downtown.

I once interviewed Ka Bino Guerrero, a prominent tour guide, for a profile on history and walking around uptown and downtown Cebu. Magellan’s Cross and Basilica Menor del Sto. Niño are the starting lane of his Old Cebu Walks. He asserted that history is subject to interpretation, and we must all read different sources and footnotes and formulate our own take on history from thereon.

With the blessing of the newly restored Magellan’s Cross and the nearby belfry, Ka Bino posted a note on Facebook, questioning the legitimacy of the cross.

Was it the real cross Magellan planted? Or did our pagan ancestors not revolt against the new religion, chop the cross, and burn it? Our ancestors, after all, worshipped the trees, the rivers, the rocks: Nature as the Omnipotent and the Omniscient, which now proves to be truer with the immediacy of climate change.

The accounts of Miguel Lopez de Legazpi [he himself and his fleet forcibly docked in Cebu in 1565] mentioned the St. Niño. It never said anything about the cross; the accounts of two of the earlier historians who had visited Cebu: Fr. Pedro Chirino, SJ (1557-1635) and Fr.Francisco Ignacio Alcina (1668) said nothing either, according to Ka Bino.

Historians, Ka Bino said, never wrote about the cross because it was simply not there.

The encasing of the original cross was done in 1835 to protect it from people who wanted a chip from the cross, believing it had miraculous healing power. The Church has always been shrouded in mysteries and controversies that I am wondering if the cross’ authenticity or inauthenticity really matters to the Cebuanos like Nanay Claudia. Or me.

It matters more to other people like Nanay Claudia whose lives and income depend on the number of candles sold for the day. And despite divorcing myself from the Catholic life my parents ingrained in us, I bought the candles: Blue for travel and career. Yellow for health. Red for love. Pink for happiness. Green for success.  Because there is still the religion, the kingdom of kindness and humanity to practice and pay homage to. Jona Branzuela Bering is a writer and photographer from Cebu, Philippines. When she is not traveling, she gardens, teaches, and becomes the slave of four cats. Follow her travels on Instagram @backpackingwithabook or on her blogBackpacking with a Book.