Facebook Twitter Copy URL
Copied
If you dream of someday visiting London, I hope this guide helps you make it happen. You don't have to be a millionaire – you just need to work, and save, and continue dreaming

“P50,000? That won’t even pay for the hotel,” said one reader skeptically, in reaction to “DIY guide to planning your dream Paris trip – on a budget.” It’s understandable – cities such as Paris, London, New York, and Singapore are known to be among the most expensive in the world in terms of cost of living.

However, as with a lot of things in life, the most important thing in a traveler is attitude – if you think it can’t be done, then you won’t be able to do it, but where there’s a will, there’s a way. And if you have the will – the willingness to be practical with expenses and the diligence to look for cheap deals – there is definitely a way to go on a 7-day trip to London for only P50,000 (And, yes, that includes airfare!).

Let’s talk about the biggest expense first: airfare. Ordinarily, round-trip plane tickets from the Philippines to the United Kingdom would cost at least P40,000. However, if you keep an eye out for sales, it’s very likely you can get tickets for less than P30,000.

Currently, only Philippine Airlines flies non-stop from Manila to London. You can watch out for their sale announcements on Facebook and other social media.

Alternatively, you can fly to a neighboring Asian city and catch a flight to London from there. For example, Cebu Pacific piso sale tickets to and from Hong Kong can go for as low as P1,214.10, while an Etihad round-trip Hong Kong-London ticket can cost P27,045.37, for a total airfare of only P28,259.47.

Of course, when we say it’s only P28,259.47, we mean relatively – compared to regular fares. We don’t mean to imply that it’s a small amount or that everyone can afford it. And definitely, travel shouldn’t be made a priority over more important things like food, education, or your family’s future.

But a lot of people have this misconception that only millionaires can travel to Europe and that’s just not true. (See: Save for a trip to Europe in 1 year) If it’s really a dream of yours, you can find a way to make it happen – if not right now, then in the future. Work for it, save for it. Don’t stop dreaming. 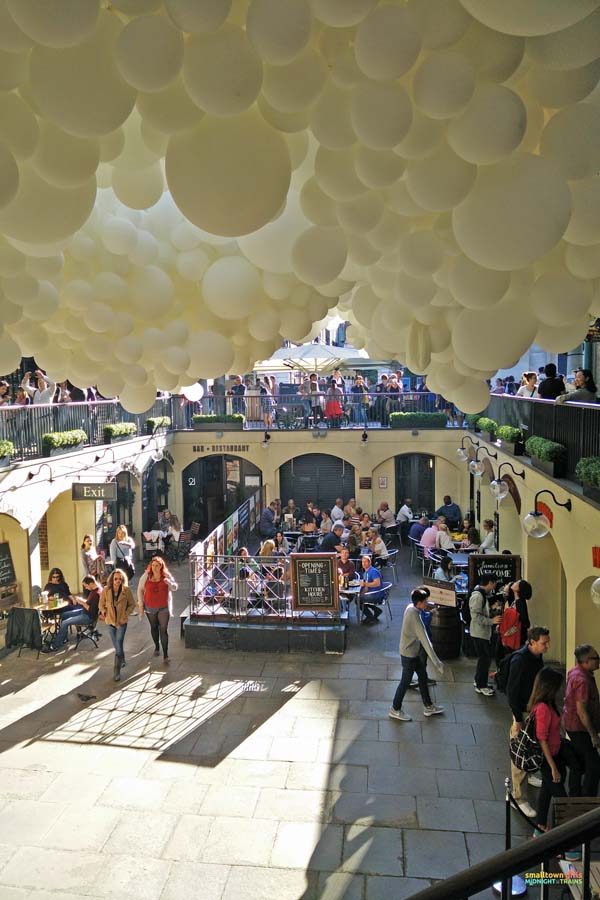 For a solo traveler to London, the cheapest option for lodgings would have to be a bed in a hostel. Prices vary throughout the year, but a Booking.com search for a one-night stay in mid-November pointed to SoHostel as being the cheapest (P991/night) among those rated 7/10 or higher by travelers.

SoHostel is located in Soho, a lively area in Central London that is home to a lot of theatres, restaurants, and shops. Its central location makes it a good base for exploring London and many attractions are within walking distance – the British Museum, for example, is only half a mile away from SoHostel.

How to save on food

A restaurant meal in the touristy areas of London can easily set you back £20 (or more). However, if you’re not too picky and you’re willing to eat convenience store food, you can make those £20 last for 2 days (or more).

The first thing you have to do is drop by a Tesco or any other convenience store and stock up on water, juice, and a couple of chilled ready-to-eat meals. Keep these in your hostel fridge. Also make sure you have a water bottle that you can refill and take with you when you go out for a day of sightseeing.

For breakfast, you can simply heat one of your ready meals. Tesco sells meals like sausage and mash, or creamy mushroom chicken and rice, for only £0.95. A liter of orange juice costs £0.65, or an equivalent of £0.17 for a 250-ml glass. That’s a total of only £1.12 for your first meal of the day.

If you prefer a light breakfast, a cheese roll or similar bread only costs £0.25. And, of course, you can always bring crackers and sachets of 3-in-1 coffee from the Philippines.

Finally, for dinner, you can go for another ready meal. For £0.95 you can have spaghetti bolognese or lasagne; for £2, you can have chicken & chorizo paella or chicken tikka masala. But if you want to treat yourself to a good hot meal, head to the nearest Nando’s. A quarter chicken and a side of spicy rice will only set you back £6.80 – and if you’re dining with a friend who works in the NHS, you can get a 20% discount.

For more dirt-cheap dining options in London, see: Eating cheaply in London: How to spend only £4 a day on meals.

Commuting in the UK is generally expensive. First of all, buy an Oyster card – it’s a smartcard that you can use to pay for nearly all types of public transport. More importantly, it gives you big discounts on fares; for example, a single Tube ride can cost £4.90 if you buy a ticket with cash but only £2.40 if you use an Oyster card.

Public transportation options in London include buses, trains, and Santander Cycles (popularly known as Boris Bikes – more on that later). A flat fare of £1.50 applies to all bus rides. The fares for trains – which include the London Underground (Tube), Docklands Light Railway (DLR), London Overground and National Rail — are a bit more complicated.

London is divided into several zones: zone 1 is the central area, zones 2-6 form concentric rings around zone 1, and zones 7-9 are even farther away. (Think of it as like a target, with Zone 1 as the bull’s-eye.) Train fares depend on which zone you’re traveling in, how many zones you cross, etc. Fortunately, most of the attractions that would interest first-time visitors to London are within zones 1-2.

Another thing to note is that London has a fare capping system – after you’ve spent a certain amount on public transportation in one day, you will no longer be charged for subsequent journeys. Within zones 1-2, the fare cap for trains is £6.50. For example, once you’ve taken 3 train rides within zone 1 (at £2.40 each) you will no longer be charged for any other train ride you take in the same day, as long as you stay within zones 1-2.

Tips to save on fares:

What to see and do in London

Now we come to the easy part! There are so many free attractions in London that even 7 days isn’t enough to see and do them all. Here are just some of them. 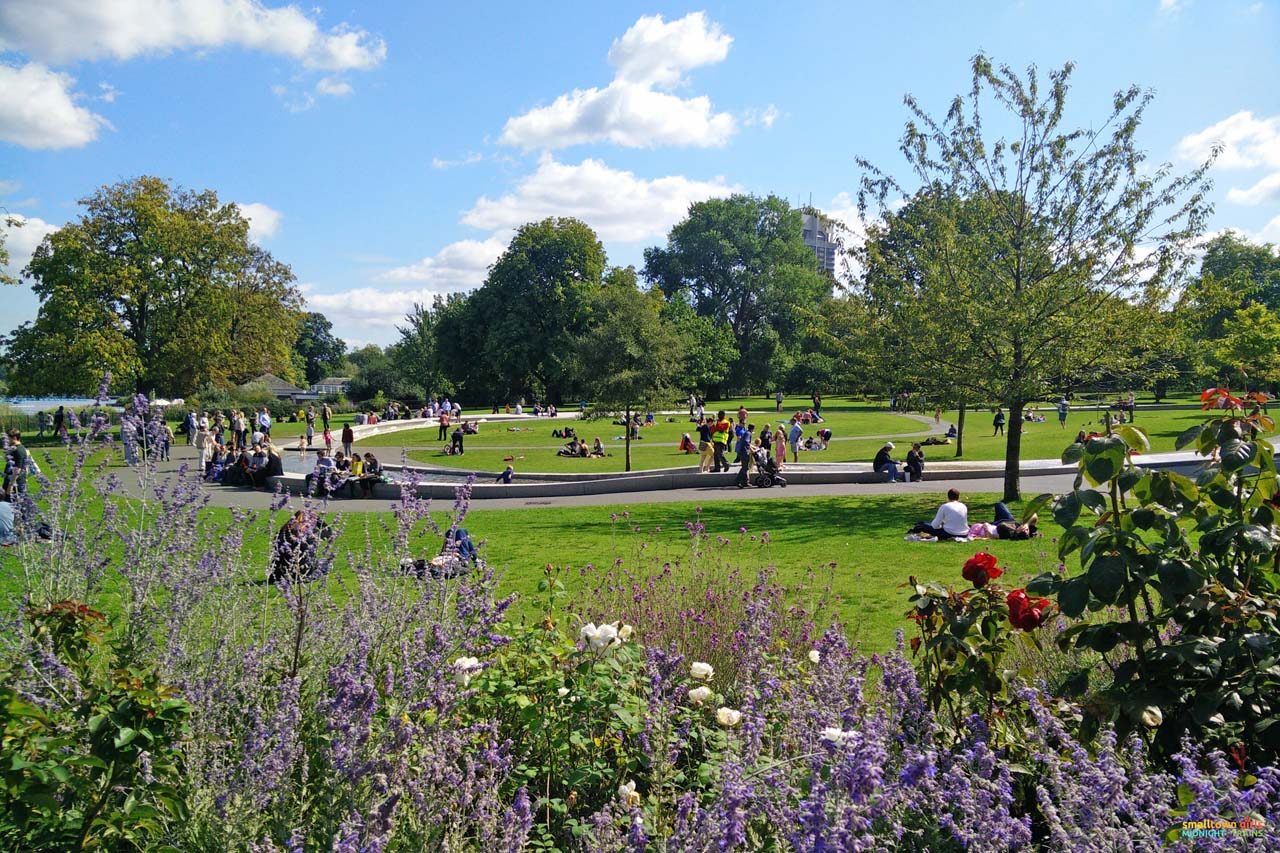 You can take walks in Southbank (where the London Eye is), Little Venice, Highgate Wood, and Epping Forest. The popular Changing the Guard ceremony, which takes place outside Buckingham Palace, is absolutely free. Another ceremony, which is not as well known, is the Ceremony of the Keys, a locking-up rite which has been taking place at the Tower ofLondon every night for the last 700 years.

The only time in recent memory that the ceremony was interrupted was during an air raid in World War II: the Chief Yeoman Warder and the escort fell from the shock of the bombs, but they simply stood up right after, continued the ceremony, and wrote a formal letter of apology for the interruption to King George VI. Tickets to see the ceremony are free but you have to reserve them in advance.

For Harry Potter fans, you can have your photo taken at the symbolic Platform 9 3/4 at King’s Cross – it’s free if you use your own camera. It’s also possible to get free tickets to tapings of TV and radio shows at the BBC.

If you’re interested in politics (or just curious), you can attend debates at the Houses of Parliament. And if music is your thing, there are free lunchtime concerts inSt Martin-in-the-Fields (Trafalgar Square) on Mondays, Tuesdays, and Fridays at 1:00 PM.

One thing that’s definitely worth paying for is the theater. Although they are ordinarily pricey, you can get theater tickets for as low as £10 (learn how here). At Shakespeare’s Globe, you can even get tickets for £5 but there’s a catch: you’ll have to stand throughout the entire play. (If you’re a Shakespeare fan, it will probably be worth it, as the actors will sometimes circulate through the standing area during the play.)

Feel like splurging on a play you love? Les Misérables tickets start at £24.75. (My sister treated me to a Les Mis ticket and it was the highlight of my stay in London.

Again, with so many free things to see and do in London, it’s entirely possible to spend £0 on attractions. The places that charge admission fees – you can always just look at them from the outside. But if you can, though, watch a play.

Budget for attractions: £5 (P330) for a Yard ticket at Shakespeare’s Globe

There are many beautiful English cities and towns that are a short train ride away from London.

Oxford, the oldest university city in the UK, is less than an hour away from London by train. The Oxford college buildings are renowned for their beautiful architecture as well as for the people who have walked their halls. Christ Church College was one of the locations for filming of the first Harry Potter film. CS Lewis was a Fellow and Tutor in English Literature at Magdalen College, while JRR Tolkien studied at Exeter College and later became the Professor of English Language and Literature at Merton College.

Lewis, Tolkien, and their fellow writers – collectively called the Inklings – often met at a pub in Oxford called the Eagle and Child, which you can still visit (and eat at) today. On-the-day tickets to Oxford can cost £30.60 one way, but if you book early enough, you can get Advance tickets for as low as £6 per trip. (See The Man in Seat 61 for a comprehensive guide to train travel in the UK.)

And if you have £119, you can go on a hassle-free day tour to Stonehenge, Bath, and the Cotswolds (which include some of the prettiest villages in England).

You can read about how we applied for a UK visa here: Getting a UK visa in Cebu: What you need to know.

For most of us, P50,000 isn’t cheap. With that amount of money, you can visit a dozen provinces in the Philippines or a handful of countries in Southeast Asia. But if you dream of someday going to London, I hope this guide helps you make it happen. You don’t have to be a millionaire – you just need to work, and save, and continue dreaming. Don’t let anyone tell you it’s impossible. – Rappler.com

Gaya is a travel blogger from Cebu whose background in psychology and medicine has taken a backseat to her passion for writing and traveling. Her main occupation is spamming her friends’ Facebook feeds with travel articles she’s published in her blog Small-Town Girls, Midnight Trains, but for bread and butter she takes on writing and healthcare-related projects from home. Her bucket list includes taking her family to Rome, seeing the northern lights from the Scottish highlands, and walking the Camino de Santiago.