Facebook Twitter Copy URL
Copied
See glowing lanterns light up the night, as far as the eye can see. The sight brings a tear to the eye; a visit to Loy Krathong is an unforgettable cultural experience

Every year in November during the full moon, the sky in Chiang Mai is lightened by thousands of lanterns that are released into the night sky. This amazing spectacle is called Loy Krathong and takes place every year in different locations around Thailand. But the most stunning celebrations are held in Chiang Mai, a city in Northern Thailand. (READ: Exploring Chiang Mai, Thailand) People gather around the river and canals to place floating candles on the water. Thousands of beautifully illuminated lanterns are sent into the night sky, in order to end bad luck. It’s such a magical cultural experience that everyone should see at least once in a lifetime. The festival takes place over 3 days. 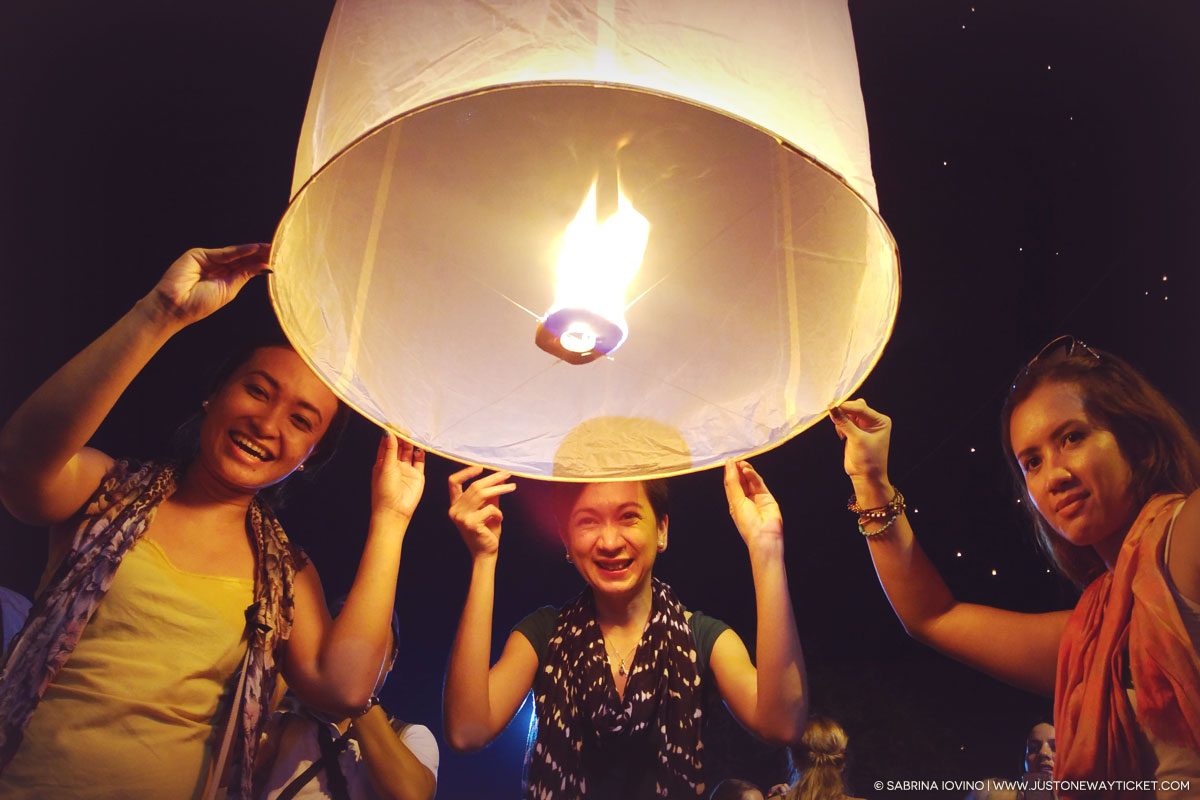 Where to see the Lantern Festival in Chiang Mai?

There are several locations where the lanterns are launched. The most spectacular event is held at Mae Jo University, about 15 kilometers outside from the center of Chiang Mai. The amazing thing about this event is that all people will simultaneously release their lanterns – it is absolutely breathtaking when you see thousands of lanterns flying up at the same time. The event used to be free, but it became so popular that they started to charge an entrance fee (about $100 – tickets needs to be purchased in advance).
The free events are held across several places in the center of Chiang Mai.

A popular place to see fireworks and parades, but also the release of lanterns, is at the Nawarat Bridge, east of the Old City. This place tends to get very crowded. Many people will gather around Thapae Gate, and at the Three Kings Monument to witness this magical festival of lights from there. Several temples will hold a religious ceremony as well, the biggest will be held at the temple Wat Phan Tao in the center of the Old City. Monks will release beautifully illuminated lanterns in a tranquil garden, lit up with thousands of candles. How to light up the lantern and release it

Please be very cautious when you light up a lantern. If you have never done this before, here are some tips. Don’t do this alone, you need at least 2 or 3 people to prepare this. Two people should hold the lantern, one will light it up. Open the lantern to its full size and hold it up before you light it. Use long matches instead of a lighter, as it takes some time to get the circle completely lit.The fire will fill the lantern with hot air. Before you release it, make a wish, then let it go and enjoy the view. 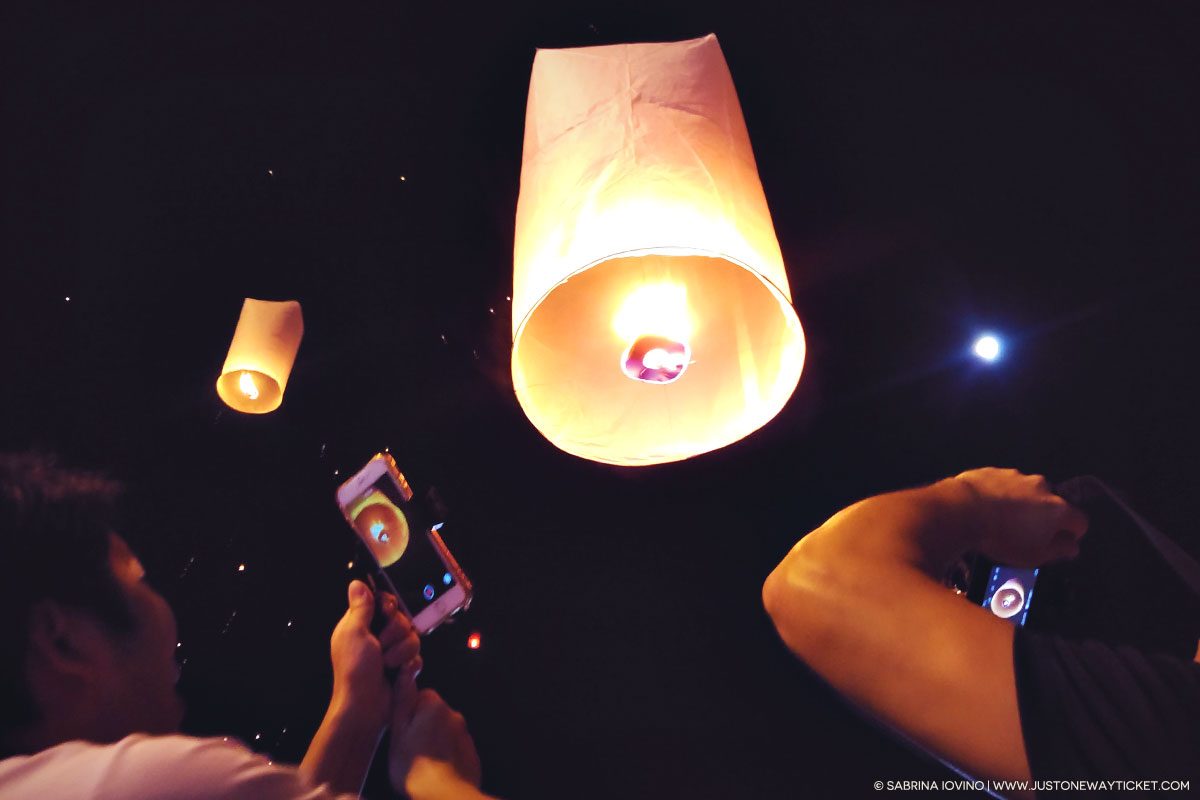 Good luck and I hope I’ll see you at the next Loy Krathong Festival! 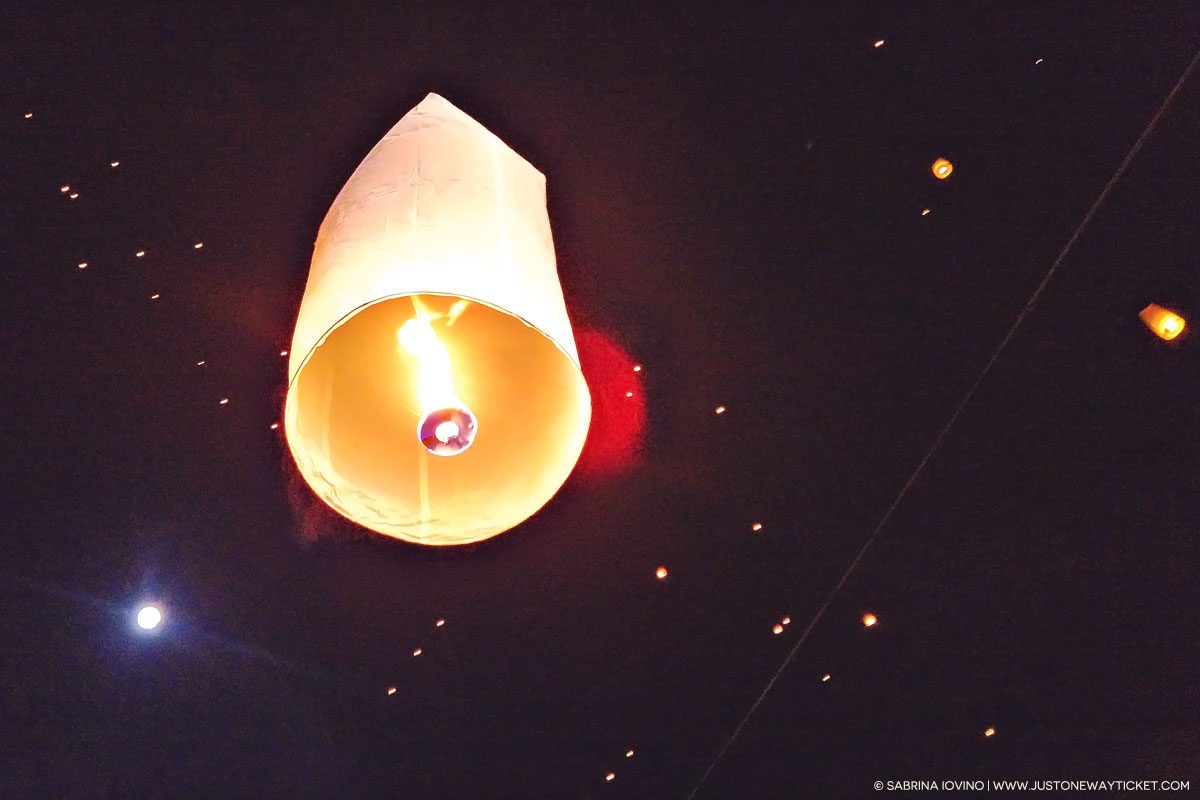 Sabrina Iovino is the blogger behind JustOneWayTicket.com, an inspiring travel blog focused on her travel experiences (and disasters). Sabrina is half-German, half-Italian and has traveled to more than 50 countries around the globe. She left her home Germany in 2008 and has been traveling and living in Asia for most of the time. The Philippines is – obviously – her favorite country. Follow her adventures on Facebook, Twitter and Pinterest.