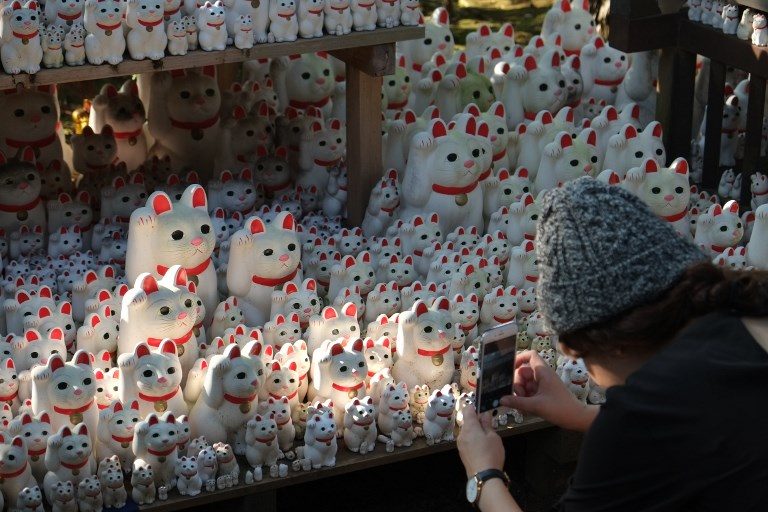 Facebook Twitter Copy URL
Copied
Around 10,000 figurines of white cats seated with one paw raised are stacked and strewn around the Gotokuji temple, providing tempting fodder for social media mavens from Japan and abroad

TOKYO, Japan – Tokyo’s Gotokuji temple has long attracted spiritual visitors with its thousands of figurines of beckoning white cats, thought to bring good luck. But of late it has brought in another breed: Instagrammers.

Around 10,000 figurines of white cats seated with one paw raised are stacked and strewn around the temple, providing tempting fodder for social media mavens from Japan and abroad.

“This was named one of the most ‘Instagrammable spots.'”

“These cats are like a symbol of luck in the Japanese culture,” she added, looking for for new angles to capture the copious cats.

Ying-Chi Hsueh, 31, a photography student from Taiwan, also said he had been drawn to the temple by the photogenic felines.

“I saw a picture on Instagram and I came here using Google Maps,” he said.

They were among dozens of visitors there the week before August 8 – International Cat Day – snapping shots of the temple’s “maneki-neko” or “beckoning cat” figurines.

Temple lore says the popularity of the figures was inspired by an event at Gotokuji in the 15th century.

The priest at the time kept a cat called Tama, which according to legend one day strolled out of the temple and raised its right paw to beckon a powerful samurai lord inside – moments before a thunderstorm stuck.

Impressed by the cat who had helped him escape the storm, the lord became a patron of the temple.

Tama the cat has been immortalized as a stylized white cat figure considered a symbol of good luck in Japan and across Asia, usually depicted sitting on his back legs with one paw raised.

The figurines are often spotted in businesses and some versions feature a paw that moves back and forth.

“The maneki-neko gives you the chance to appreciate what you have, the people you meet,” Gotokuji’s deputy priest Tessai Kasukawa told Agence France-Presse.

“The feeling of appreciation will bring you good luck.”

And the feline figurines have certainly brought luck to the temple, which says it is seeing a growing number of visitors.

“Now with the Tokyo Olympics coming up (in 2020), we receive many international visitors. They spread the word about the temple, making this place globally famous,” Kasukawa said. – Rappler.com