2 ways to explore Singapore in a day Facebook Twitter Copy URL
Copied
If there's any country that can be enjoyed in a matter of hours, it's Singapore

With its status as a transport hub and its proximity to Manila, it’s not uncommon for travelers to find themselves in Singapore with not a lot of time to spare. Whether it’s a long layover, a quick weekend off, or a free day in the middle of a business trip, some people just don’t have the luxury of time to explore the country.

But if there’s any country that can be enjoyed in a matter of hours, it’s Singapore, where efficient train lines make it easy to go from one end of the city to the other, and where the mundane becomes exciting because of the country’s multicultural charm.

Here are two ways to do it:

Itinerary 1: Get busy, get touristy

This itinerary covers a lot of Singapore’s major landmarks, so it’s perfect for those who want to satisfy their curiosity of tourist sites  With the sites’ proximity to MRT stations or to each other, this itinerary is best done via commute – especially since you can take an MRT straight from the airport and back (the trains also save you from being stuck in traffic). The colorful Sri Mariamman may look small and unassuming, but it is a historically significant site, being the oldest Hindu temple in Singapore. The elaborate Dravidian architecture in itself is a sight to see, but because it is also a functioning place of worship, the temple is also an interesting insight into the Indian aspects of Singapore culture.

The temple itself is not that big, so you can see most of it in half an hour or less. Just remember to be respectful, as people actually go there to pray and worship. You’ll need to deposit your shoes by the entrance, and if your shoulders and legs are exposed, you will need to cover up (you can borrow shawls and wraps at the entrance). The location of the temple is a sightseeing bonus. Located in the downtown Chinatown area, it’s surrounded by rows of colorful colonial houses, some of which have been converted to storefronts. The whole vibe is very Notting Hill, but Asian – though certainly every bit as photogenic.

Head to the Buddha Tooth Temple and Museum (20 minutes) It only takes a certain number of steps to shift from exploring Singapore’s Indian heritage to the country’s Chinese heritage. The Buddha Tooth Temple Museum is a 3-minute walk from Sri Mariamman Temple, and it also requires visitors to cover up if they’re wearing revealing clothes.

It’s a Tang-style Buddhist temple, which, as its name suggests, houses what is believed to be the sacred tooth relic of Buddha. Aside from being a place of worship, it also houses an exhibition of artifacts related to Buddha, as well as a theater where cultural performances are held. Of course, if you’re seeing it in a rush, you may want to forego spending a lot of time in these areas and simply walk through the temple’s halls, where Buddhist monks practice their ceremonies. Before you leave, light an incense stick, whisper a prayer, and get ready for some walking as you head to the next stop.

Check out the Fullerton Building (20 to 30 minutes) From Chinatown, you can take the MRT to Raffles Place station, and from there take a 5-minute walk to the Fullerton Building. Located right along the mouth of the Singapore River, it was built in 1928 and once housed the General Post Office, the Chamber of Commerce, the Singapore Club, and other government offices. The historical building was also once a lighthouse, with a beacon on the rooftop that guided watercrafts entering the Singapore harbor. To add to its historical significance, the plaza in front of it, Fullerton Square, was the favorite venue of political activists who often held rallies there from the 50s through the 80s.

Since then, the building has been restored and is now being used as a luxury hotel. If you can spare the time, grab a quick Singapore Sling at the hotel’s Post Bar, or drop by the free admission Fullerton Heritage Gallery which is also within the hotel.

Drop by the Merlion Statue (15 minutes) From the Fullerton, you can take a 5-minute walk to Merlion Park, which houses the Merlion Statue. The statue – which towers at about 20-feet tall and spouts water – depicts the half-lion, half-fish mythical creature that is considered to be symbolic of Singapore. There may not be much to do at the park, but the Merlion statue alone makes it the perfect spot for the ultimate “I went to Singapore” photo. It’s also a good area to take a breather, maybe have a snack, and enjoy the panoramic view of Singapore’s Marina Bay. It only takes about 7 minutes to walk from the Merlion Park to St Andrew’s Cathedral, an Anglican cathedral and Singapore’s largest cathedral. Of course, the structure’s Neo-Gothic architecture is a sight to behold in itself, but another attraction here is the Art Connector.

The Art Connector is a walkway that displays various artwork, with the mainstay being a piece that features portraits of Singaporean citizens etched into copper, in celebration of the diversity of Singaporean people. The Art Connector is in front of St Andrew’s Cathedral and right across the National Gallery, so while you may not have time to see the gallery exhibitions, walking down the path will already give you a little glimpse of what it’s like.

Ride the MRT to the Botanic Gardens (1 to 2 hours) Singapore prides itself on being a garden city, and the Botanic Gardens embodies that. Think of it as a manicured, cultivated rainforest, with thick greens that make the air especially refreshing. A lot of locals jog in the area, but it’s perhaps best seen on a leisurely stroll that allows you to appreciate the countless species of flora that the garden maintains. (Also, it’s over 150 years old, and has been recognized by Unesco as a World Heritage Site).

There are a lot of special areas inside the Botanic Gardens, including an actual rainforest that’s older than the gardens themselves, a ginger garden with a waterfall, a children’s garden with a playground, lawns that are perfect for picnicking and lounging around, and several lakes, including one with a stage in the center of it, where the Singapore Symphony Orchestra plays on weekends. Of course, the main star of the Botanic Gardens is the National Orchid Garden, which houses a collection of thousands of orchid species and hybrids that are perhaps the most colorful and vibrant flowers you’ll ever see. The orchid garden itself has many pocket attractions, with areas divided mostly according to the types of orchids they contain. One particularly interesting section is the VIP orchid garden, which displays orchid hybrids that have been named after heads of state, as part of Singapore’s “orchid diplomacy” (and yes, there is a hybrid there named after President Rodrigo Duterte).

If racing through tourist attractions is too overwhelming for you, zero in on Tiong Bahru. The area is mostly leafy suburb, with quiet residential buildings and narrow lanes, where the most action-packed thing that could happen is a kid riding their bike. The area is a quirky blend of the hipster and historic, with sights that will make you feel like you discovered them purely by serendipity. Just take the MRT to the Tiong Bahru station, and start your exploring from there.

There’s something inherently exciting about rifling through stacks of books, even though you know you’ll never get to read them all. If that sounds like time well spent to you, head to Yong Siak street, which is about 9 minutes on foot from the MRT station. BooksActually on Yong Siak street is an independent bookstore that carries a collection of literary classics, contemporary fiction, coffee-table books, rare vintage books, and poetry. A large majority of their offerings are by local and Southeast Asian writers, so it’s a good place to start if you want to get a handle on Singaporean literature. Also, the shop itself has a sort of handcrafted charm that makes the whole browsing experience feel like a small adventure. 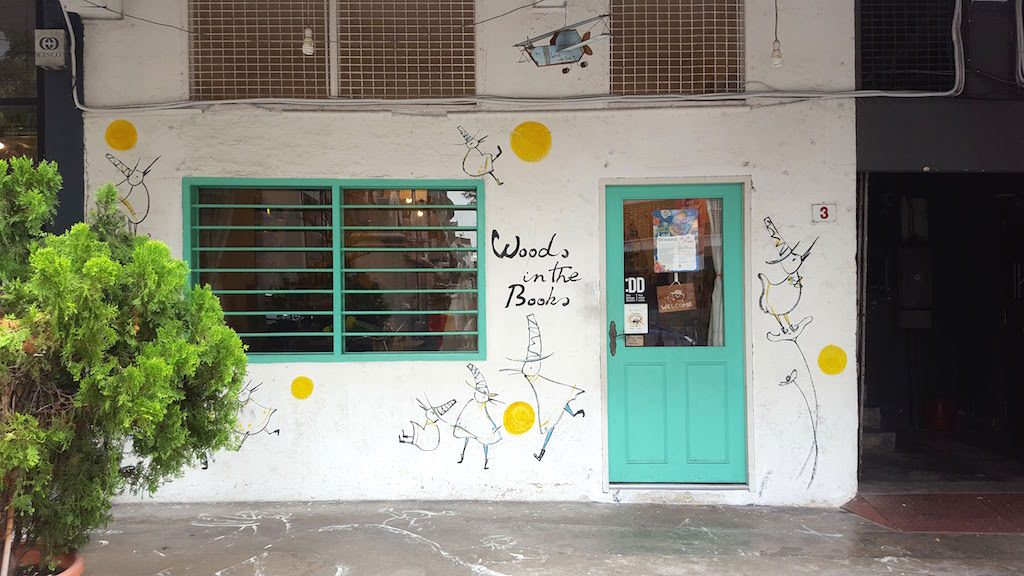 Near BooksActually is Woods in the Books, also an independent bookstore that specializes in kids’ picture books so exquisite that even adults will enjoy them. The bookstore’s sunny windows and walls filled with murals are quite a sight, though photographs are not allowed inside, so you’ll just have to enjoy them right then and there.

Admission: Free (but not the books!)

Walk through the heritage apartments (30 minutes to 1 hour)

Walk about a couple of minutes away from Yong Siak street, and you’ll find yourself on the Tiong Bahru Heritage Trail. The full trail is about a 3-kilometer stretch and includes 10 stops, so it’s up to you to decide how much you can see with the time you have. The stops include the historic Tiong Bahru Community Center, built in 1951, and the Seng Poh Garden, which houses the Dancing Girl sculpture done by Lim Nang Seng – the same man who did the Merlion statue.

What’s particularly interesting on the heritage trail are the blocks that showcase Singapore’s architecural history, from the pre-war art-deco flats on Tiong Poh Road, the Horseshoe Block on Moh Guan Terrace that was once the only 5-storey building in the district, and the post-war, International Style flats along Lim Liak Road that look like they could be part of a Black Mirror episode.

The Tiong Bahru Market on Seng Poh Road is only a few minutes’ walk from wherever you may have ended up on the heritage trail, since it’s the trail’s first stop. Like most of Tiong Bahru, the market itself has been around for decades, dating back to the 1940s. In fact, a few of the stalls in the market date back to as early as the 1950s, so anyone who eats here can legitimately claim to have had heritage food.

Admission: Free (but not the food!)

Both itineraries also work for a quick weekend getaway! – Rappler.com