Chinese communities around world welcome Year of the Pig HONG KONG – Chinese communities began welcoming the Year of the Pig on Tuesday, February 5, ushering in the Lunar New Year with prayers, family feasts and shopping sprees after embarking on the world’s largest annual migration.

In mainland China over the past week, hundreds of millions of people have crammed into trains, buses, cars and planes to reach family and friends, emptying the country’s megacities of much of the migrant workforce.

Celebrations will take place across the globe, from Southeast Asia’s centuries-old Chinese communities to the more recently established Chinatowns of Sydney, London, Vancouver, Los Angeles and beyond.

The most important holiday of the Chinese calendar marks the New Year with a fortnight of festivities as reunited families wrap dumplings together and exchange gifts and red envelopes stuffed with money.

Pigs symbolize good fortune and wealth in Chinese culture and this year’s holiday brings a proliferation of porcine merchandise, greetings and decorations.

During the Spring Festival season – a 40-day period known as “Chunyun” – China’s masses will be on the move, chalking up some 3 billion journeys, Chinese state media reported.

Streets and busy thoroughfares were uncharacteristically empty in Beijing on Monday, with many shops and restaurants closed until next week.

A growing number of Chinese are also choosing to travel abroad, booking family trips to Thailand, Japan, and other top destinations.

In Hong Kong, flower markets were filled with residents picking out orchids, mandarins and peach blossoms to decorate their homes – with stalls also boasting a dizzying array of pig-themed pillows, tote bags and stuffed toys.

Thousands of incense-carrying petitioners crammed into the city’s famous Wong Tai Sin temple overnight, a popular location to mark the first prayers of the New Year. 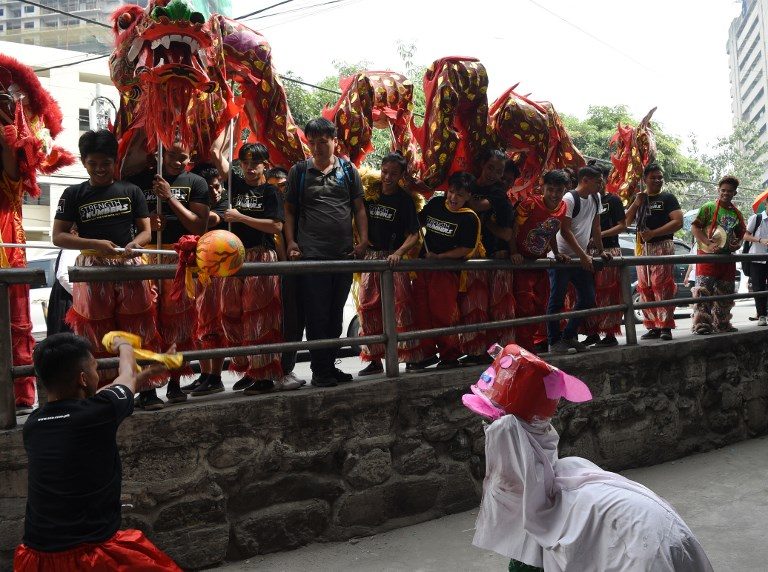 In Malaysia – where 60% of the population is Muslim, and a quarter ethnic Chinese – some shopping centers chose not to display pig decorations, while some shops kept them inside.

But shoppers and traders said that was usual in a country where the Muslim majority are sensitive about an animal considered unclean in Islam, and overall there had been little controversy this year.

Next door in Indonesia, the world’s largest Muslim-majority country which also has a sizeable ethnic Chinese population, the Lunar New Year is a public holiday.

Events like traditional lion dances are held in decorated public spaces while supermarkets stock up on mooncakes and tangerines.

In Japan, the capital’s famous Tokyo Tower was due to turn red in celebration of the New Year – a first for the city.

Parades and lion dances in Western cities such as New York and London were expected to draw large crowds.

“In Taiwan we are able to maintain our cultural traditions,” she said in a video in which she delivered the traditional new year greeting in 5 Chinese languages: Mandarin, Taiwanese, Hakka, Teochew and Cantonese.

Mainland authorities have long been accused by critics and minorities of pushing Mandarin at the expense of other languages.

China still sees Taiwan as part of its territory to be reunified, despite the two sides being ruled separately since the end of a civil war in 1949.

Relations between Taipei and Beijing have had a rocky start to 2019 after Xi Jinping delivered a bellicose speech last month describing the island’s unification with the mainland as “inevitable”. – Rappler.com