Windows of hope: Life in Europe under lockdown 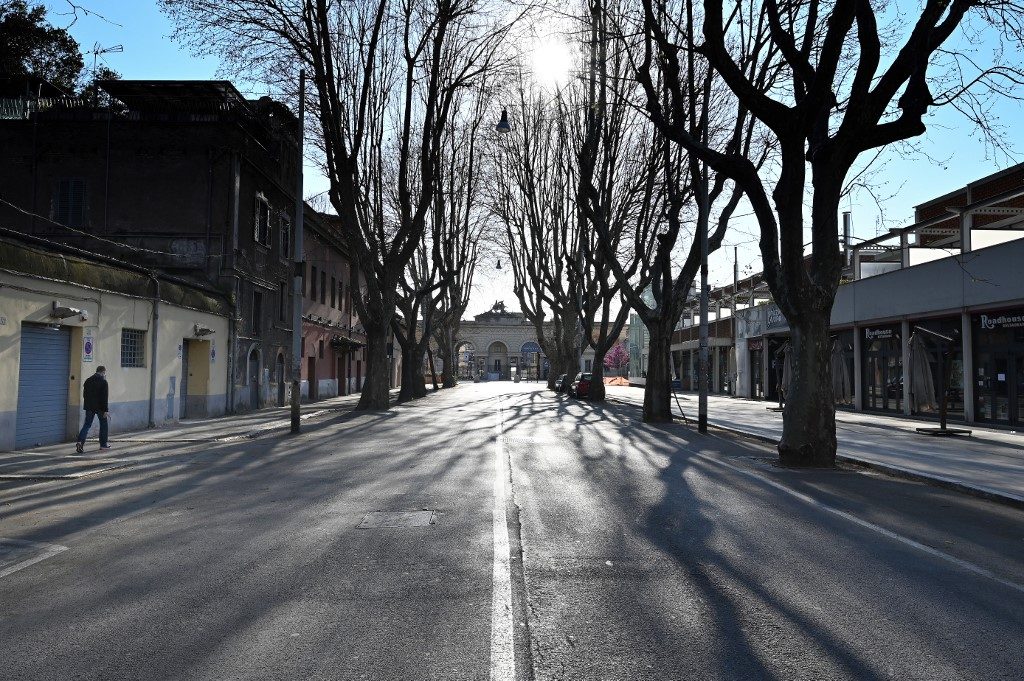 Facebook Twitter Copy URL
Copied
From Rome to London, people in Europe try to move on with their lives despite the coronavirus threat

ROME, Italy – From the elderly Italian woman who routinely lines up the glasses of water she sets herself to drink every day, to the British composer leading a virtual orchestra, life for Europeans under coronavirus lockdown is an uncharted mix of resilience and creativity.

Hundreds of millions of people have suddenly undergone the biggest change to daily life since World War II as governments order them to stay at home in a bid to beat the disease.

Amid disaster movie-like scenes of deserted streets, the main challenge for many is simply keeping up their spirits despite the boredom and isolation of being confined at home.

Whether it’s having evening drinks on video phone, chatting to neighbors through open windows, or joining in mass sing-alongs and applause, staying connected with the outside world is key.

Carla Basagni, 86, a retired artist living in Rome’s Trastevere neighborhood, has made herself a routine to get through the days alone.

“Since I can’t go out, I do gymnastic exercises in my house. I drink at least five times a day: I’ve got five glasses of water lined up in my kitchen so I don’t forget!” she told AFP.

But she added that she drinks “only a little wine, even if I love it!”

In Italy, which rolled out new restrictions at the weekend after becoming the new epicenter of the disease, people need a special personal declaration to leave the house confirming that it’s for work, grocery shopping or a critical reason such as health.

Anyone caught breaching the lockdown risks three months in prison and a 206-euro ($220) fine.

Stuck in her house for nearly 24 hours a day, Basagni says that she cooks “nice little meals, I read, and sometimes I lie down for a little sleep on my sofa or on my bed.”

Paula Perez, a 19-year-old medical student who lives in a Madrid apartment with her mother, said she was “very moved” the first time she heard the applause for health workers.

In their little 50-square-meter (538-square-foot) apartment, they follow the same ritual every evening: at 8:00 pm, after the applause, neighbors speak to one another out of their windows.

“Our neighbor above works in a hospital and tells us what’s happening,” said Perez.

Spaniards are under strict lockdown and can only leave home to work if they can’t do so at home, buy medicines or food, or to briefly walk the dog.

Madrid’s usually crowded streets are now practically empty. Instead, people play music from their balconies or have lottery parties with their neighbors, shouting out numbers from one window to the other.

Perez’s mother Maria Jimenez, 48, an agricultural engineer, works remotely from a table in the front room after all her work visits were canceled.

She speaks every day to her elderly parents in a village in the southern region of Andalucia, while worrying about her siblings, some of whom work in health or for the police. She adds that sometimes she feels “guilty” of being “useless”.

“I read the newspapers on the internet, we watch the TV news over dinner,” adds Perez, “but I don’t want to think about the epidemic all day: that makes me anxious.”

Baptiste Saude, a freelance documentary director in his 30s who lives in Paris, says that the “most difficult thing is the absence of any social life”.

Normally he would play sport or see friends in the evening, but since the lockdown he’s been experimenting with a “Skype apero” – an evening drink via video call – with other locked down friends.

France last week adopted similar rules to Italy and Spain except that going out for some “physical activity” is allowed. Violators face a fine of 135 euros.

Saude says he, at least, has previous experience of being under lockdown while he was in the French military on a base in Mali.

He’s also helping elderly people in his neighborhood by calling them for a chat, for example 84-year-old Odile, whom he helps to record herself doing scales for a remote piano lesson.

Ben Morales Frost, a composer based in southeast London, is using his self-enforced quarantine to spearhead a global music initiative called “lockdown orchestra”.

He said that for most musicians “suddenly, the rug’s been pulled from underneath them”.

“So I thought it’d be quite nice to set up a virtual orchestra,” he added.

Britain has implemented a less stringent shutdown compared to its European neighbors, but last week ramped up its response, closing schools and then ordering all cafes, pubs and restaurants to close until further notice.

Following an appeal to musicians shuttered in their homes around the world, Frost has recruited more than 500 – enough to staff seven full-size orchestras – on 6 continents to collaborate on a piece of music he recently wrote.

They will send him clips that he’ll then edit together with a remote team, before the virtual concert goes on YouTube on Friday.

“It’s gone nuts actually – I did not expect that at all.” – Rappler.com