Jul 12, 2020 1:07 PM PHT
Agence France-Presse
Facebook Twitter Copy URL
Copied
The state of Florida is one of the hardest-hit by a new wave of cases and deaths in the US 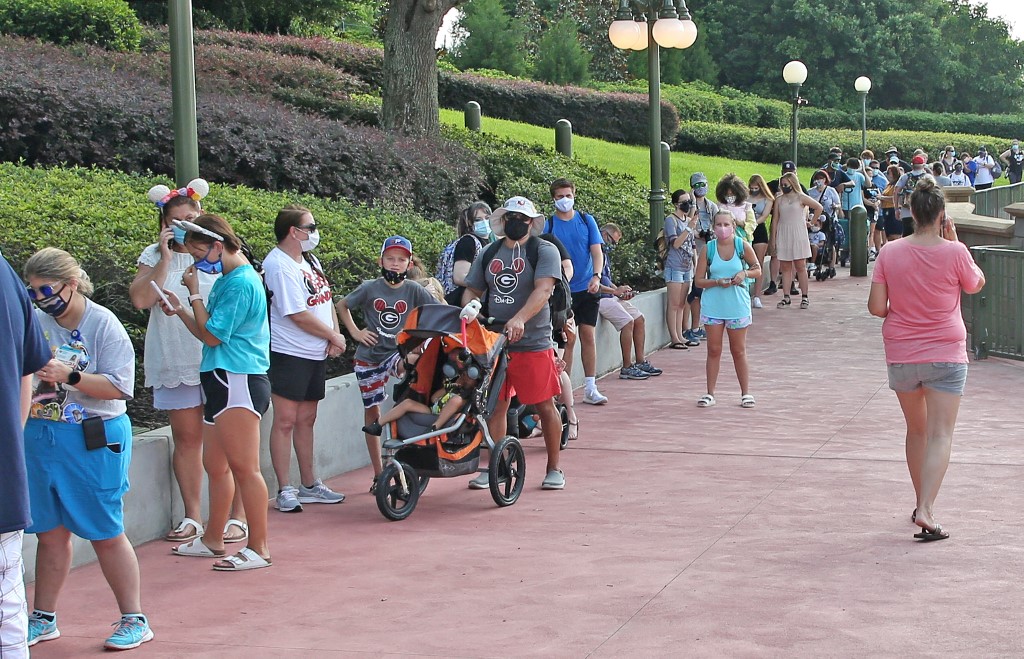 ORLANDO, USA – Disney World is known as “The Most Magical Place on Earth” but as the Florida theme park reopened Saturday, July 11, it was counting on a bit of science – masks, social distancing, hand sanitizer – to stave off the coronavirus.

The state of Florida is one of the hardest-hit by a new wave of cases and deaths in the United States, already the most affected country in the world in terms of infections and fatalities.

On Saturday, Florida reported its third-highest daily increase in cases, with 10,360 new infections, as well as 95 deaths.

In Orlando, Disney World reopened two of its four parks – Magic Kingdom and Animal Kingdom – after four months of closure. Epcot and Disney Hollywood Studios will open on Wednesday.

Several hundred people queued in the Florida heat ahead of the park’s reopening – some sporting Mickey ears but all wearing masks, part of the park’s new guidelines requiring them for both guests and employees.

Saturday’s visitors had reserved their tickets in advance, allowing Disney to control the number of people in the park and accommodate for social distancing. Tickets are already sold out through July.

The park was carrying out temperature checks at the entrance and hand sanitizer was widely available. Disney said it was enforcing social distancing of six feet (two meters) at attractions and inside shops.

“By visiting Walt Disney World Resort you voluntarily assume all risks related to exposure to COVID-19,” the park said on its website.

Gone are the park’s famous parades which allow mingling with Disney characters; also absent are the evening fireworks shows.

On social media, many criticized the park’s reopening as Florida experiences an accelerated number of cases.

The state’s Republican Governor Ron DeSantis began reopening Florida’s economy in phases in May and June.

Top US infectious disease expert Anthony Fauci said Thursday that Florida had begun reopening before meeting the criteria that would have enabled it to do so safely.

DeSantis disputed the remarks, saying his decision to reopen was justified by figures at the time.

At the end of June the governor took a step backwards, ordering the closure of bars in an attempt to limit the spread of the virus, but cases have continued to climb.

Florida is not the only state grappling with a serious spread of COVID-19.

In Georgia, Atlanta Mayor Keisha Lance Bottoms on Friday ordered a return to the southern city’s Phase 1 lockdown, telling nearly all residents to wear masks, a retreat after having partially reopened the city. Bottoms herself has tested positive.

Fulton County, which includes Atlanta, registered 435 new cases of the disease in the latest 24-hour period.

Arizona has seen a steady rise since March in the use by hospital intensive-care units of artificial breathing machines.

In Texas, several hospitals – including in Houston’s huge medical complex – say their coronavirus wards are at or near capacity, amid fears of a further influx of patients in coming days.

And some states that had largely been spared up to now – including Idaho, Oklahoma and North Dakota – have been setting new virus records almost every day. – Rappler.com