Romance on the road: A traveling couple’s love story Facebook Twitter Copy URL
Copied
They knew how it worked, that people come and go all the time. And so they went their separate ways – but then they couldn't forget about each other

We often hear about people who set off to travel the world then end up meeting the perfect person for them. We see it in movies and even read about it in books, but in reality, these things never happen – or so I thought.

Little did I know that I would end up traveling the world with that guy. Shortly after, he came over to borrow my sled and the rest was history. Coming from two completely different cultures and backgrounds, you would think that we wouldn’t have anything in common. I was a Manila girl who tried to get away from the city as much as possible while he was from a small town in Wales, UK.

We ended up traveling together for the rest of our trip to Vietnam where we spent our days riding on motorcycles, laughing, and comparing silly dance moves. At this point, I was about to reach the one-year mark of my backpacking trip around the world while Tom was six months into his. (READ: How traveling as a couple changes your relationship forever)

We knew how it worked. People come and go all the time and because I had already spent a month in Vietnam, I had to move on to my next country.

Despite us going our separate ways, we both couldn’t forget about each other. I traveled Laos by myself while Tom continued to ride his motorbike up Northern Vietnam, right by the border of China. We stayed in touch and decided to meet up again in Thailand.

After almost another month of traveling through Thailand together, it was time for me to go home. Go home to join “the real world” and start working again.

Going our separate ways was hard, but we both knew it was coming. I remember asking Tom what he saw when he looked deep into my eyes.

He smiled and simply said, “I see so much life when I look at you. I see happiness, kindness and the thirst you have, to keep living your life to the fullest.” Tom was heading to Malaysia and planned on going to the Philippines after, but to be honest, as travelers, we both knew that anything could happen and that plans could always change.

After a couple of months, Tom landed in the Philippines – and never left. He fell in love with the Philippines in an instant. Whenever I didn’t have work, we backpacked our way through our many lush islands. Tom and I love traveling local in order to get the full experience of what the culture of the place is like.

When we were in Palawan, we lived with a local fisherman who kindly welcomed us into his home. We absolutely loved it! We ended up trying our luck at fishing (which was pretty uneventful apart from me falling in the water), became regular customers of the sari-sari store next to us, and eventually befriended the people in the neighborhood whom Tom all fondly called “nanay” (mom) and “tatay” (dad). We even got invited to a birthday party where we got to show off our karaoke skills to everyone.

I tried to explain to Tom how important the concept of family was in the Philippines, but it was not hard because everywhere we went, he would see it. Those types of experiences were the ones that made Tom realize how beautiful the Philippines truly was. (RELATED: What I’ve Learned Dating a Filipino Woman)

Tom even began learning Tagalog which he proudly surprised me with by learning the lyrics to Parokya ni Edgar’s “Harana” which he sang for me on Valentine’s Day.

Being from different sides of the world, we had to learn how to adjust, accept, and eventually love each other’s cultural differences. Traveling has broadened our perspective about a lot of things as I constantly meet people from different walks of life. (READ: Move slow, move local: A story of how we travel)

Not only did I find the person who understands me best, I also found a partner in crime to continue my travels with. As I was finishing my masters degree, Tom got a job in a tech startup company which he loved doing. In a short amount of time he had fully adjusted to the Filipino work culture, made new friends, and opportunities were opening left and right for him. However, during our year in Manila, we both found ourselves missing life on the road. This was when we decided to start our blog, Adventure In You. We did this to stay connected to traveling, after all, it’s what brought us together. We meet so many people who live their lives scared to get out of their comfort zones. We want to inspire people to work hard for what they want and pursue it-relentlessly.

We know that the life of travel and adventure is not for everyone, but whatever you want in life, you shouldn’t be afraid to dream it, and more importantly, pursue it.

Both Tom and I worked very hard in order to afford to travel. Tom was working as a waiter in the UK to save money while completing his degree and I on the other hand, worked around 12 hours a day teaching and tutoring on the side. As much as we both loved the Philippines, we found ourselves feeling “stuck,” going through the motions of working a job and a routine.

Coincidentally, Tom received another job offer which became the catalyst for our big decision to once again pack up our lives into one bag and continue our dreams of traveling. Although Tom was offered a high paying job, he chose to walk away from the pursuit of financial security in order to pursue life and happiness. (READ: Career or Travel – Why not both?) 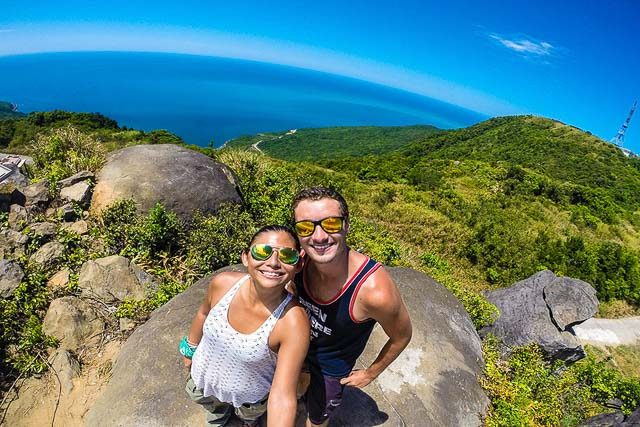 I on the other hand, want to show that it is possible to travel the world, even for a regular Filipino like me. With no set plan, we packed our bags, sold everything that we own, and will be soon leaving with a one way ticket to Indonesia. We plan on going to Sri Lanka or India after, and eventually make our way to South America, but to be honest, we could end up anywhere!

All we know is that we want to travel the world together, experience life at its fullest, one adventure at a time. – Rappler.com

Tom and Anna are two travelers who met one fateful day on the sand dunes in Vietnam. Brought together by their love for silly dance moves, good food, and discovering new cultures, they’re on a mission to go have as many adventures around the world as they possibly can. They are wanderers and adventurers who want nothing else but to enjoy the little things in life while traveling the world.  Follow their journey on Facebook, Twitter, and Instagram as they inspire and unleash the Adventure in You.