Iloilo City is one of the few cities in the country that is conscious of its cultural heritage areas, actively securing resources and developing policies for their preservation. Republic Act 10555, enacted in 2013 under the authorship of then congressman Treñas, clearly specified several areas of the city as “Cultural Heritage Tourism Zones” and accorded priorities for preservation, refurbishment, and development by the Department of Tourism. Seven specific places were identified: two churches (Jaro, Molo) and their adjoining Plaza complexes, Fort San Pedro, the Central Business District (CBD), and the Plaza Libertad complex. In 2020 the act was modified in Congress to include the Arevalo Plaza complex. As of August,  the Plaza Libertad and Molo Plaza complex have been refurbished and re-designed, with ongoing work in the CBD, Jaro, and Arevalo.

The focus then was on the CBD. Some buildings were deteriorating, and shopping malls built on the city proper margins were drawing customers away from the narrow streets of Calle Real/JM Basa and Iznart.  The ICCHCC initially catalogued and identified 25 structures that met their criteria for “heritage buildings” including a specification that these should be at least 50 years old. By 2009, seven other buildings and streets were added to the list, followed by district plazas. Several city ordinances followed, providing for preservation, collaboration with the private sector, and incentives for the owners. In 2020, a comprehensive conservation plan for the historic center of the CBD was carried out by the creative design firm, PGAA. 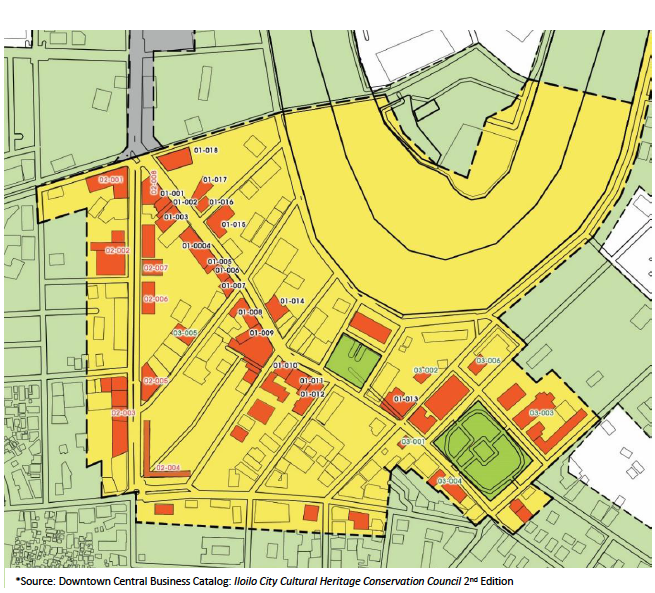 Walking through JM Basa Street in the early morning, from Plazoleta Gay intersection down to Plaza Libertad, a stretch of seven blocks, is a delight, with heritage buildings on both sides, the likes of which make it feel like parts of the European continent. Most are in neoclassical, beaux-arts, art deco, or streamline modern style. A high-rise, mixed use commercial and residential building is being constructed right on the border of the CBD heritage zone across Plazoleta Gay, and this has been controversial.

Plaza complexes have a fascinating history. Sociologists and historians say these arose with a proclamation of Philip II in the 1570s, defining the “urban” pattern of Spanish colonizers in their territories. It successfully centralized authority in a visually appealing, rectangular central space, which had the main government building, markets, and homes of prominent citizens around, with the church as the central institution. People were encouraged to live “bajo de la campana” (under the bells) – a more efficient way to call people to church, spread news, and warn of emergencies and attacks.  Developing on this concept, police stations, post offices, schools, and health centers were built around the plazas. Since Jaro, Molo, and Arevalo used to be independent municipalities, they had their own plazas, and were formally incorporated as districts of Iloilo City during the Commonwealth era.

Arevalo, also known as Villa, was once the seat of the Spanish government in Panay Island. It was established in 1588 by Governor Gonzalo Ronquillo de Peñalosa who named it after his hometown, Avila. It is reputed to have the third oldest cross in the Philippines, and one of the oldest Santo Niño images. The cross is in a small chapel about a kilometer away, in the barangay of Santa Cruz. Prominent in the plaza area are markers for Ramon Avanceña, a former Chief Justice and the educator-feminist Sofia Reyes de Veyra. Aside from the art-deco styled Rizal monument, there is a fluted column topped by a crown, dedicated to the former queen of Spain, Isabel II.  The old parish convent is still in use. The plaza is surrounded by many ornamental plants as the district is also known as the “flower garden of Iloilo.” A few steps away one can find ancient traditions of loom weaving, piña, and jusi  at the Iloilo Sinamay Dealer, and a heritage house/museum, the Camiña Balay na Bato.

Molo was also known as Parian, a Chinese enclave. The plaza is relatively smaller compared, but seems to have been designed to highlight the majestic Parish of St. Anne, built in the Gothic-Renaissance style in 1860, and once visited by Rizal in 1896. Notable structures in the plaza complex include an American-era art deco bandstand, a faux Grecian temple with statues from mythology, and a Maria Clara statue sculpted by the Italian Francisco Monti, whose work includes the Rizal Memorial Sports Complex and the Metropolitan Theater. There is a children’s playground, and one corner has horizontal and parallel bars for gym workouts and pull-ups for the athletically inclined. Following its renovation and refurbishment, undertaken with the support of TIEZA and the National Historical Institute, the plaza and church now has a “wow” factor, especially at dusk when it begins to light up. Directly opposite the church is a grand mansion that is now an SM Kultura shop, its grounds hosting several trendy cafés and snack places.

The Jaro Plaza has the belfry of the cathedral as its most prominent structure; unlike most belfries, this one is located a street away and separate from the church. The plaza has seen better days – it has a bandstand built during the 1930s. There is a monument to national hero Graciano Lopez Jaena and a war veterans’ memorial. Surrounding the plaza are magnificent, if decaying, mansions built during the early American era, that proudly proclaim Jaro as the “first millionaire’s row” in the country. Major heritage structures nearby include the Jaro Cathedral, seat of the Archbishopric; the former Jaro municipal hall, designed by Arellano in 1934 in the Art Deco style. The archbishop’s palace, designed by Nakpil, is across the Plaza, as is the Jaro Evangelical church, the first Baptist church in the country. The February 2 feast day celebration, cockfights, and procession are considered the most opulent, with prominent families from all over tracing ancestral links to Jaro in a bid to have their daughters selected as the Jaro carnival queen. 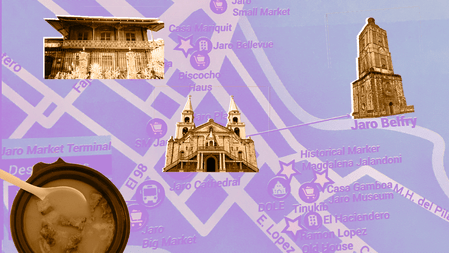 The Plaza Libertad complex was where the flag of Philippine independence was raised in 1898 when the Spanish hastily departed their last capital city in the Philippines – they moved the capital to Iloilo for a few months after the Americans took Manila. This scenic square was once known as Plaza Alfonso XII and served as the main social hub for the city, having regular band concerts. It has one of the oldest Rizal monuments, figures of Greek mythology attributed to Monti, and an American-era water trough, used as a planter. Plaza Libertad has several historic buildings around it such as the Masonic Temple Building, the residence of a former city mayor that has at various years been a Japanese garrison, a “comfort woman” station, hotel, and offices; currently it is a Land Bank branch. Heritage buildings bordering the plaza include the DBP, the PNB, and the Lacson house. The church of San Jose, run by the Augustinian order, and spiritual home of the Dinagyang Festival, used to be the most prominent structure, until it was eclipsed by the seven-story city hall, completed in 2015. Plaza Libertad’s masterful refurbishment and re-design has made it even more appealing and accessible, while providing additional open space for city hall activities.

The last of the heritage zones is also the oldest – Fort San Pedro. It was completed in 1616, when the capital of what was then the main Spanish settlement in Panay was moved to “La Punta,” an area near where we now find the Muelle Loney-Santo Rosario area, because Arevalo was under constant attack by the Dutch, the British, pirates, and slave traders. The Fort measured 60 x 60 meters. It was built from coral stones from the southern Panay coast and rocks from Guimaras. It served as the gateway to the Iloilo harbor. The fort was captured by the Japanese in 1942 and destroyed during the closing stages of World War II. Very little is left of the original fort – foundation stones, but it remains a popular venue for fishermen, bathers, and cyclists, and has the best view of the sunset, with Guimaras Island looming large across the strait. Miraculous religious statues have been found in the area, and are enshrined in the San Jose church.

While not considered heritage zones under the law, resources are allocated to other plazas as well. A koi pond has been built in the Lapaz plaza to add to its other attractions – tennis courts, a football field, and a clam shell-type sound stage. Mandurriao plaza has a monument to Gen. Douglas MacArthur.

Lastly, one cannot write about Iloilo City nowadays without mentioning the award-winning Esplanades; I can walk along scenic, sheltered riverside paths, crossing colorfully painted bridges, from the Molo Plaza to the CBD to Plaza Libertad, a stretch of about 5 kms. Achievements like these don’t get accomplished easily or within a single mayor’s term – they take vision, partnerships with the private sector, supportive legislators, relevant government agencies such as the National Historical Commission, and longer term political commitment. Iloilo City is now reaping benefits for being one of the most livable cities in the country, and is a preferred site for MICE tourism (Meetings, Incentives, Conferences and Exhibitions). Kadto na kamo sa Iloilo! (Come to Iloilo). – Rappler.com