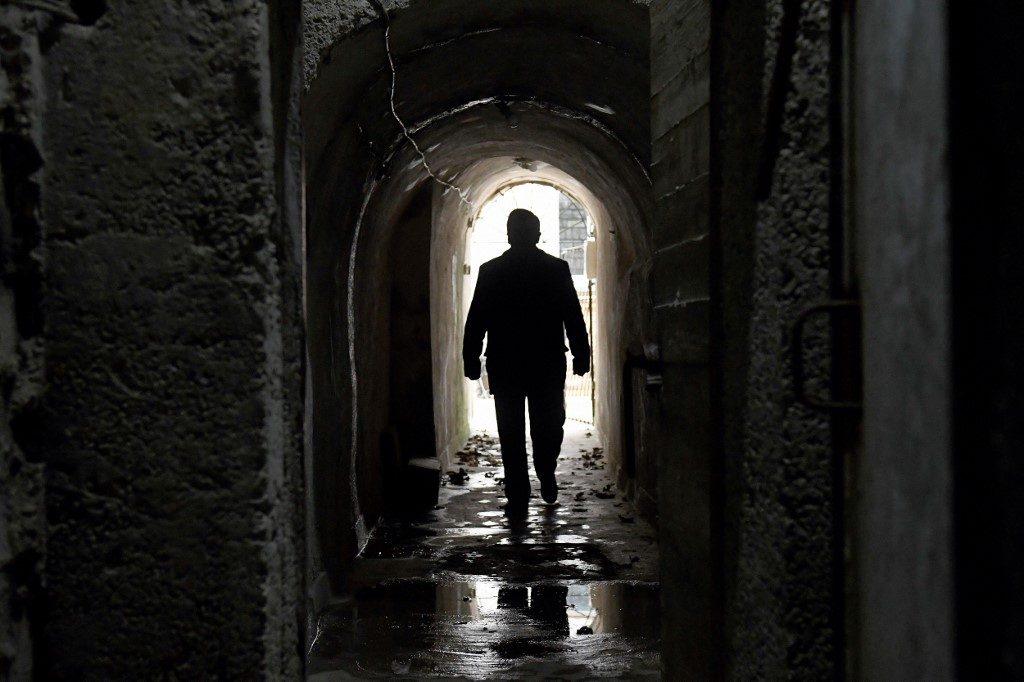 In this photograph taken on February 2, 2020, Astrit Imeri, a former soldier, walks inside The Cold War Tunnel Museum at Gjirokastra, Albania. - Snaking beneath a fortress in southern Albania, a covert tunnel network built during the country's communist era captures the secrecy and paranoia that defined the long rule of former tyrant Enver Hoxha.Today communism is gone and the military bunker is a tourist attraction, still drawing rare visitors during the pandemic, when themes of fear, isolation and confinement are particularly resonant. The sprawling underground complex, now dubbed the Cold War tunnel, is part of a vast and costly "bunkerisation" project spearheaded by Hoxha, who was gripped by anxiety of a possible foreign invasion during his 40-year isolationist rule. (Photo by Gent SHKULLAKU / AFP)

Snaking beneath a fortress in southern Albania, a covert tunnel network built during the communist era captures the secrecy and paranoia that defined the long rule of tyrant Enver Hoxha.

Today communism is gone and the military bunker is a tourist attraction, still drawing rare visitors during the pandemic, when themes of fear, isolation, and confinement are particularly resonant.

The sprawling underground complex, now dubbed the Cold War tunnel, is part of a vast and costly “bunkerisation” project spearheaded by Hoxha, who feared foreign invasion during his 40-year isolationist rule.

In order to fortify the hermit state, he oversaw the construction of more than 170,000 military bunkers across Albania.

Most are small dome-shaped structures, built as sentry posts for soldiers, that still dot the landscape today.

The underground matrix burrowed beneath the citadel of Hoxha’s hometown of Gjirokastra, in the country’s south, is among the most impressive. Today it’s a UNESCO World Heritage Site.

Construction crews worked shifts in secrecy to ensure no one had a view of the full plan for the 1,500-metre tunnel network built to house the military command in case of a foreign assault.

It was rediscovered after the fall of communism in the 1990s and has since become a tourist draw.

While COVID-19 has dealt a heavy blow to Albania’s tourist season, some 300 mask-clad visitors still explored the underground lair this summer, including Alexandre Benlalam, a 39-year-old Parisian computer engineer.

“Today we are visiting this bunker to reflect and think about the sad time we are living with the pandemic, we are deprived of certain liberties, freedom to touch each other, to speak to each other, to meet,” he told AFP.

Today’s “limitations are in the right direction” however, he added, contrary to the deprivations under Hoxha’s iron-fisted dictatorship.

While the tunnel walls are now crumbling and old furniture left behind is covered in dust, the complex was initially highly sophisticated.

The corridors connect nuclear bomb shelters and scores of offices for the military command, secret police, public prosecutors, and a court, explained Astrit Imeri, a 67-year-old former military officer, as he revisited the underground hideout.

Additional spaces were carved out for wiretapping operations, dormitories for sleeping, a bakery, water tanks, and a stash of Kalashnikovs and TT pistols to be used against potential enemy intrusion.

“The tunnel had all the resources to stay there not just for a few hours but for days and weeks,” Imeri said.

He was among those who took part in elaborate military exercises held inside the tunnels to prepare for a war.

Locals were also called to participate, including Engjell Serjani, 60, a radio journalist who remembers having to “cover” a fabricated conflict in the mid-1980s as part of the drills.

“We actually had to come up with information about the attacks, the deaths, the damage on the ‘front’ and prepare special programs,” he told AFP.

From bunkers to funky cafes

After the fall of communism in 1990, Albania’s bunkers were mostly abandoned, while some larger sites fell victim to looters.

In recent years some of the shelters have been converted into funky cafes, warehouses, or housing for the homeless.

The site in Gjirokastra is now one of the major tourist attractions of the “city of stone”.

Tourism has grown steadily ever since Albania, so long cut off from the world, opened up to visitors drawn to its beaches, mountains, cuisine, and unique history.

But this year tourist arrivals are down dramatically due to the pandemic, in what could be a loss of one billion euros.

The tourism ministry reported a 64% decrease from January to July, with 1,690,000 fewer foreign visitors compared to 2019.

Small groups of tourists wandering through the alleys there “give a glimmer of hope”, insists Maksim Hoxha, president of the city’s chamber of commerce.

“Gjirokastra always has something to offer”. – Rappler.com