Facebook Twitter Copy URL
Copied
With lush forests, hiking trails, and art installations, this park just outside of Seoul is a Korean must-see

MANILA, Philippines – After recently easing COVID restrictions, it has never been easier to travel to South Korea in the pandemic, and as the home of K-pop, K-drama, and samgyupsal, Filipinos have a million and one reasons to make the journey.

The obvious South Korean stop would be the country’s buzzy capital, Seoul, which is filled with all kinds of tourist to-dos that range from historical sites to K-drama filming locations, and lots of dining, drinking, and shopping in between 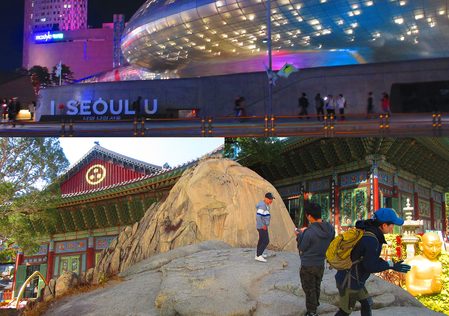 Once you’re in South Korea though, you shouldn’t sleep on the Anyang Art Park – a massive nature park just outside of Seoul that has lush greenery, doable hiking trails, and quirky art installations, making it a great Instagram backdrop for the social media-conscious and the perfect day trip from Seoul for anyone who wants to veer slightly off the Korean tourist trail.

The park is located in Anyang, a satellite city of Seoul. To get there from Seoul take the subway, going down at the Gwanak station (on the blue line). The ride takes about an hour. From there, you can take a bus to Anyang Art Park, but you can also walk to the park – it’ll take about 30 minutes, but it’s a leisurely stroll, and you get to see more of the city that way.

There isn’t a gate or a specific entrance to the park, but you’ll know you’re there when you see a stream lined with a sidewalk on one side and cafes and restaurants on the other.

You’ll also see the information center, where you can grab a free map of the park for more informed exploration. You can also grab a “passport” – which lets you collect eight stamps at specific art installations, and if you get all the stamps, you can bring it back to the information center for a souvenir.

You can even go in blind (as in, mapless) and just follow the trails where they lead you. There are enough signs around the place so you won’t get totally lost.

There are 52 art installations within the park. If you’re really determined and if you have a lot of time and superhuman energy, you might be able to rush to see them all. If you’re more chill and have the energy level of a normal person, you’re better off picking a handful of sites to check out and explore.

Going into the forest from the main road, you’ll be welcomed with several art pieces already, among them the striking “Dimensional Mirror Labyrinth,” made up of mirror pillars arranged into a spiral maze that you can walk into and watch yourself multiply in each pillar the closer to the center you go.

Near that you can find “Anyang Crate House – Dedicated to the Lost,” a house made of multi-colored plastic beer crates that looks different from every angle, and is best seen from the inside, where the light streams in through the gaps in the crates.

Fronting the Anyang Peak on a separate path is another installation – a Space Age-style house enclosed in colored fiberglass that gives you a view of the surrounding forest.

On another path, you can see the Anyang Shrine, a commanding sculpture made of bamboo slats, and looks a bit like a giant bonfire. True to the interactive nature of the park’s installations, you can also go inside this one and get a completely different view of it.

Towards the edge of the park, you can check out “Anyang Amphitheatre,” an amphitheater with wavy seats, where you can chill and put your feet up after all that hiking.

To get there, you’ll pass through another installation, a tunnel aptly called “Linear Building Up in the Trees,” and if you’re lucky, there will be live musicians playing at the amphitheater, and their music will echo in the tunnel.

On your way back to the information center (or the subway station back to Seoul), you’ll also be able to see the artificial falls, which look especially pretty in the sunset, though the water doesn’t always run.

Of course, these are just some of the many, many installations you can check out and experience at the park, in addition to several Korean temples, if you want to experience traditional Korean culture too.

I can imagine the park is picturesque no matter the season, but when we went in early autumn, the leaves on the trees were beginning to change in color, making the landscapes even prettier. The autumn temperatures also made it cool enough for a comfy hike, but not too cold that we were freezing at every turn.

Other travelers recommend skipping summer as it can get too hot and humid for a hike, and going in spring instead, when the cherry blossoms along the stream are in full bloom.

As for what time is best to go – technically, the park is open 24/7 because there are no gates that enclose it, but the trails aren’t lit as far as I noticed. That means it’s best to head there in the morning, and wrap up your romp by sunset.

One of the most compelling reasons to go to the park – apart from the experience, of course – is that entrance is absolutely free. It’s a great alternative (or compliment) to tourist hotspot Nami Island – which is further outside of Seoul, and costs KRW16,000 (about P650) to enter. Just factor in the costs of transportation, and you’re good to go!

You’d be hard-pressed to find another free attraction with as many sights to see and things to experience as the Anyang Art Park. And with its proximity to the South Korean capital, it’s definitely a stop you should add to your Seoul itinerary. – Rappler.com