Hope for Tubbataha, cradle of life

MANILA, Philippines - By a coral-coated wall at Tubbataha’s South Atoll, our dive team heaves against the current, resisting the urge to zoom off into open water – where hungry hammerheads await.

Having spent two hours counting fish, Tubbataha Marine Park Rangers Seconds Conales, Manny Bundal, Jeffrey David and I are trying to retrieve two 100-meter transect lines. Forming a pulsating cloud of colored confetti around us is an immense shoal of reef fish. Thousands strong, the mass moves as a single entity and seems to be having no trouble with the current. 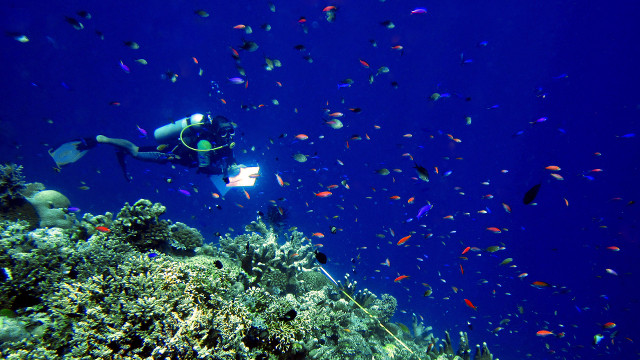 Segundo 'Seconds' Conales keeps tabs on the fish in Tubbataha

Though conducted yearly, this season’s research expedition is way out of the ordinary – for not one, but two large ships ran aground the famed reef. Led by renowned coral scientist Dr. Al Licuanan, divers from the Tubbataha Management Office, Department of Science and Technology, World Wide Fund for Nature, University of the Philippines Marine Science Institute and De La Salle University have already seen firsthand the terrible effects of ship groundings.

For a week I’ve been haunted by nightmare images of crushed coral, pulverized to grit. I’ve been trying to envision how the scars can heal, but I’m totally stumped. Transformed into graveyards of broken coral and bare rock, the grounding sites hosted only Surgeonfish. Locally called Labahita, the drab-hued reef residents eat only algae and are easily eclipsed by the reef’s shinier stars.

We fight and fin on as the current gets stronger.

The cradle of life

Bursting through the vastness of the Sulu Sea, 160 kilometers southeast of Puerto Princesa in Palawan are the twin atolls of Tubbataha, spectacular worlds brimming with wealth both beneath and beyond the blue. Formed from the eruption of undersea volcanoes over 15 million years ago, Tubbataha for the Philippines is what the Serengeti is for Africa – an unmatched cradle of life. It is the undisputed jewel of the Coral Triangle. 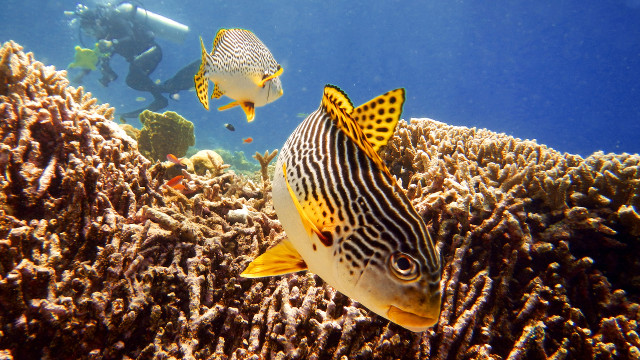 A Diagonal-banded Sweetlips (Plectorhinchus lineatus) goes about his daily business

A multi-awarded UNESCO World Heritage site which celebrates its 25th anniversary this 2013, the 97,030-hectare Natural Marine Park and no-take zone encompasses both atolls plus nearby Jessie Beazley reef.

It is accessible via a 12-hour live-aboard cruise from Puerto Princesa City, though strong waves confine recreational diving to the months of April, May and June.

It is a fish-lover’s wet dream, as over 600 types of fish – ranging from the fingernail-sized pygmy seahorse to the occasional truck-sized whale shark – patrol coral-coated slopes and dramatic drop-offs. Each dive reveals a treasure trove of finned jewels, distinguished by the way they swim. Adorned in gold and amber, butterflyfish strut like beauty queens. Sapphire damselfish dart about like little space ships. Ghostly silver batfish swim with creepiness, while grey reef sharks exude pure machismo.

“The area also hosts 360 species of coral, 14 species of shark, 12 species of whale and dolphin, endangered green sea and hawksbill turtles plus over a hundred seabird species,” adds Dygico.

All this biodiversity translates to unrivalled productivity. Whereas a typical square kilometer of healthy coral reef annually yields up to 40 metric tons of seafood yearly, Tubbataha generates over 200. Though fishing within the park is not allowed, the larval dispersal effects continually seed the far reaches of the Sulu Sea with fish and invertebrate spawn.

Above the blue yonder peek two tiny land masses spaced 8 kilometers apart. North Atoll spans 12,435 sq m and hosts over 200 trees, many shorn and pitted by ravenous red-footed boobies. The scrubby landscape rises no higher than two meters above the sea. South Atoll is much smaller, at 3140 sq m. A meter-high concrete wall, cracked and pitted by the elements, forms a protective ring against erosion, while a solar-powered lighthouse erected in 1980 by the Philippine Coast Guard stands sentinel over all.

A tale of two ships

Last January 17, the USS Guardian, a 68-meter long US Navy warship, entered Tubbataha without proper clearance to accidentally plough into the north-western portion of South Atoll. Though its 79-man detail was swiftly evacuated, it took 73 excruciating days and US$45 million to slice and remove the 1,300-ton Avenger-class minesweeper from the reef. When the silt settled, Tubbataha South Atoll was 2,345 square meters of reef poorer.

Though smaller than the wood-and-fibreglass hulled USS Guardian, the Chinese vessel was steel-hulled. This, plus the fact that the craft kept bucking up, down and sideways, proved deadly to the reef. By the time the ship was towed out 11 days later, 3,902 square meters of reef had been obliterated, with some massive 500-year-old Porites corals sheared cleanly in half. 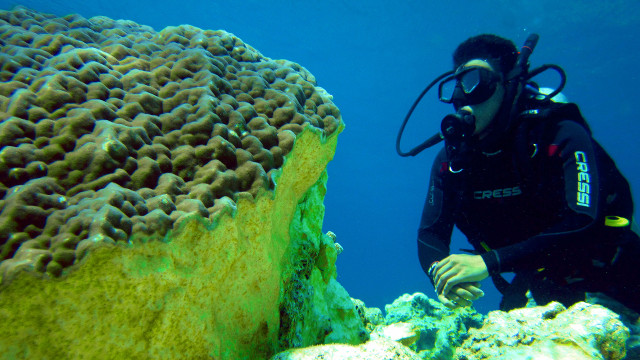 Our team spent days investigating both sites. Though the reef damage was shocking, worse was to come. Adding insult to injury, 2,870 endangered pangolin carcasses were found aboard the Chinese vessel’s holds. Though internationally protected, poachers still hunt the harmless mammals for their meat and scales to fuel the traditional East Asian medicine trade. Advocates the world over are up in arms to claim compensation for the groundings and to find ways to expedite reef recovery.

Back in South Atoll, unassuming schools of Surgeonfish whiz by as the last transect is secured. Suddenly, the fish start to glimmer. Dumbfounded, I soon remember what Tubbataha Park Superintendent Angelique Songco told us before our dive, “When the tide shifts, hot water from the lagoon mixes with cold water from the depths. The effect makes the water glimmer.” 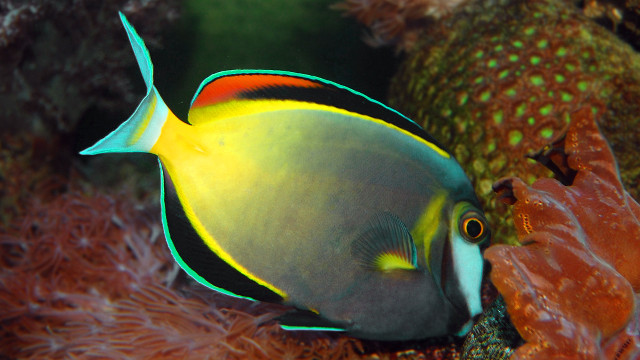 Revealed for what they are by this eerie undersea phenomenon, I realize these fish are far more than drab reef denizens. Perpetually browsing on algae, forever ignored because of their dull colors, these little lawnmowers are the secret to Tubbataha’s recovery. After visiting the grounding site of the USS Guardian the day before, Dr Licuanan explained his theory of reef regeneration.

“The key to it all might be Surgeonfish. Their constant grazing keeps algae from taking over the freshly-exposed rock. It is because of them that coral larvae will be allowed to resettle on the grounding scars. With enough luck, the scars should heal in 30 or 40 years.”

Named for the scalpel-like extensions by their tails, these valuable reef denizens are – like real-life surgeons – experts at bringing things to life.

The fish count done, we begin our ascent with renewed hope for the recovery of Tubbataha. Right before breaking the surface, I gaze a last time at the little surgeons. Though lackluster in color, they were shining brighter than any of the reef’s other jewels. - Rappler.com 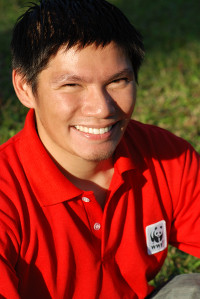