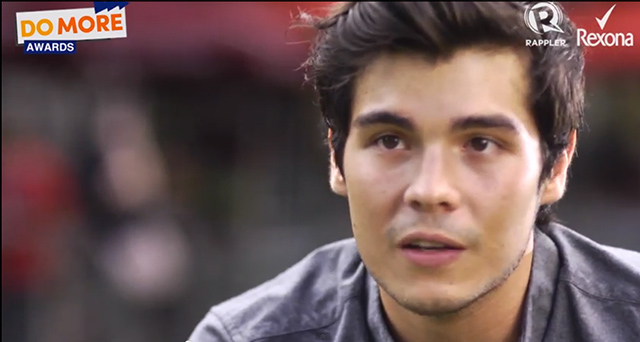 Healthy living has become a buzzword and a trend in the recent decade. Many people have subscribed to eating healthy foods, exercising regularly and keeping a well-balanced lifestyle.

But for Digital Trailblazer finalist Erwan Heussaff, keeping a healthy lifestyle is not just a personal goal. He has made it his advocacy that he hopes to share with more people.

A triathlete, entrepreneur, food and cocktail connoisseur and health buff, Erwan became famous because of his blog thefatkidinside.com, where he writes about healthy eating and living a fit life. (READ: Environment Day 2013: Think, Eat, Save)

Erwan says he started his advocacy because he grew tired of living an unhealthy lifestyle.

“I used to be very big and I just struggle with my weight to a point that it was extremely unhealthy. And then I remember when I was going through that, that I didn’t have an outlet or a person to look up to, a person to help me, where I could get information to lead an easy and healthy lifestyle,” he adds.

His blog is his way of helping people struggling with their health concerns.

“I started a blog not only to be able to communicate my passion for food, but to also help people that like me are currently struggling with weight and that need just simple tips, tricks on how to get healthier, get fitter,” Erwan adds.

Watch a profile video of Erwan and the other finalists of the Digital Trailblazer category below.

Erwan says being fit goes beyond one’s looks. One needs to have a holistic perspective towards one’s health.

“Some people look at it very superficially where losing weight is just to be prettier, better-looking, or anything. But I look at it in a way that if you have a healthier body, if you’re fitter, it’s good for your health and at the same time it makes you much more of a happier person,” he noted.

Since he started his blog, Erwan has been getting e-mails and messages from people thanking him for his help. He has become a role model in healthy living for the people who follow his blog.

“Some people were telling me that their blood sugar’s gone low, they’ve reduced cholesterol, things like that. And these are mothers, these are fathers, these are sons and daughters, so it’s fantastic to see it,” he adds.

Erwan is also an ambassador for Oxfam, where he advocates buying and eating organically grown food and energy conservation.

Aside from food blogging and advocating health, Erwan also owns a couple of food places - a cocktail bar, a gastro pub, a breakfast place, and recently, a Southeast Asian diner. This is another way for him to push his passion for food.

“None of the restaurants are the same. It’s tough to say what makes them different. It’s just in everything that we do in our restaurants we always try to be a little different in terms of the concept we’ve developed,” Erwan says.

He uses a tedious process to craft the menu for each of his restaurants.

“We’re very, very careful on how we curate the menu and the concept and make sure that it’s holistically a sound product,” he adds.

Erwan says doing more is much like keeping a healthy lifestyle. It’s all about focus and discipline.

“Doing more is being able to focus at what you’re good at and squeezing all the possibilities and opportunities out of it,” he says.

He believes passion is action and output driven.

“I’m a firm believer that all passions should have a work-related aspect to it because it becomes so much more intense and it makes you feel so much better that you’re able to work in what you love and that’s what I do everyday,” he says.

For Erwan, passion is all about inspiring others to live healthier lives. - Rappler.com