Dan Matutina: Designed to do good 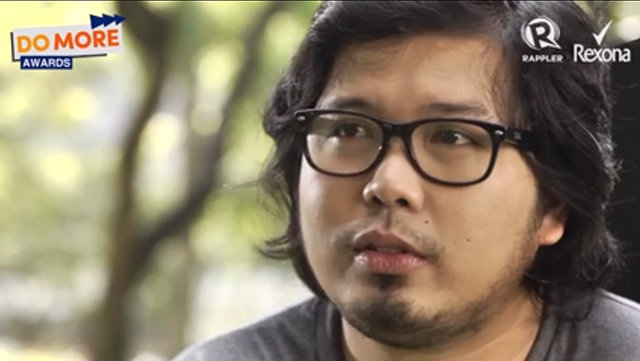 Dan Matutina is a graphic designer and illustrator whose work spans various media. To date, he has created designs for commercials, magazines, furniture, slippers, maps, and even food.

Dan says that he has loved drawing as far as he can remember. His first canvas was the the walls of his childhood home. When he was in grade school and high school, he joined a lot of art competitions. When he reached college, he got into UP’s Fine Arts program.

At first, his parents were apprehensive. “My parents were scared because they weren’t sure I can get a career in the arts,” Dan recounts. “And they were telling me nga na if it doesn’t work out I can just do the signage sa jeepney and sa mga sinehan (I can just do the signage in jeepneys and moviehouses). In the province kasi, yun yung tingin sa (that’s the perception regarding) design and arts.”

Today, Dan is the founder of plus63, a design studio that creates graphic design for different brands (Heim Interiors, Ito Kish, Mango Red) and cause-oriented organizations (Japan Foundation, SEAMEO Innotech, Asia Europe Foundation). The company’s name is a shout out to the Philippines’ country code.

Dan’s personal blog is also a visual treat that provides an archive of his personal and collaborative projects.

Watch a profile video of Dan and the other finalists of the Artist category below.

Recently, plus63 led The Design Co.Mission, an event where different graphic designers gathered to pitch solutions for pressing problems in the Philippines, particularly in health, education, and culture.

“We believe that designs can be used for social change,” Dan says.

The event's collaborators gave birth to several interesting products, such as the web design for SocialProject.ph, a crowd-funding site devoted to developmental causes.

Another was Kindred, a web app for blood donation.

Dan is also part of the think tank behind Wander, a concise, fold-out map that invites locals and tourists to visit forgotten cultural hubs in Metro Manila and other cities.

“[Wander] is a personal project with other designer friends and writers,” Dan shares. “It was based upon the premise na (that) when I have friends coming over, I can show them something that they can do, and they can go around.”

Together with his friends, Dan is determined to find ways to make art useful and accessible for more people.

Dan’s dream client is the government. He says: “If you’re a designer, you want to do work that will affect a lot of people, not just some small group of people, but a bigger group of people like the whole country.”

For Dan, design is not just something nice to look at. It can actually be a useful tool for making lives better.

“There’s a thing called ‘design thinking’ wherein a lot of companies and government agencies and non-profits use it to solve problems,” Dan shares. It’s just based on a process because design is very process oriented. You don’t necessarily have to be a designer to be able to use the process.”

“For me, Doing More is stepping out of your comfort zone,” Dan says simply. He also hopes that in the future, more artists will be inspired to step out of their own zones and create something that will do good. – Rappler.com