8 achievers recognized at Do More Awards 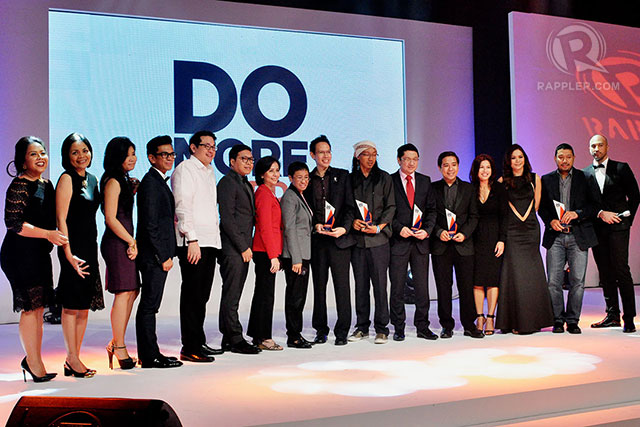 RECOGNITION. Rappler and Rexona team up to award individuals who do more. Photo by LeAnne Jazul/Rappler

MANILA, Philippines – Eight individuals who go beyond the call of duty were recognized at the Do More Awards ceremony on Thursday, November 28 at the Makati Shangri-La.

An athlete, an artist, a civic servant, an entrepreneur, a celebrity, an innovator, online personality and an influential overseas Filipino worker (OFW) were chosen by the public and a panel of 8 judges as achievers in their respective fields – people who refused to settle for a lackluster status quo and pushed themselves to make things better.

The glitzy program put together by Rappler and Rexona, was attended by public officials, civic leaders, celebrities and Rexona's ambassadors and brand representatives. It was hosted by model and Unilever Philippines executive Apples Aberin and celebrity and tech entrepreneur KC Montero.

The Do More Awards was launched in September to honor achievers from all walks of life.

The scores of the 8 winners were culled from the judges' vote (60%) and public vote (40%). The public vote was based on an online poll conducted by Rappler from October 24 to November 24. The 8 emerged victorious from an original list of 24 finalists (3 for each category).

The Artist - AG Saño, mural artist and advocate for marine conservation and peace in Mindanao

The Innovator - Rolando Dela Cruz, president and CEO of the Darwin International School System in Bulacan

The Social Entrepreneur - Mark Ruiz, co-founder and president of Hapinoy

The winners get P50,000 each and a spot on Rexona's roster of Ultimate Doers.

As could be expected of people who "do more," the winners reminded the audience of the many challenges Filipinos still need to deal with together. Super Typhoon Yolanda, which devastated central Philippines and left millions homeless, was mentioned in several acceptance speeches.

Civic Hero winner Luis Oquineña and Artist winner AG Saño offered their victory to the typhoon victims and volunteers who continue to help rebuild the storm-hit communities and calamity-struck lives there.

Social Entrepreneur winner Mark Ruiz, who has devoted his life to raising people from poverty, said the country's problems are so complex that Filipinos cannot just stand back and let the problems solve themselves.

Senator Bam Aquino, who gave the night's closing remarks, capped the event by saying the Do More Awards is also "a call to action for those who don't do more." The year 2013 has brought problem after problem to the Philippines, causing despair and inertia. People who can face these problems head on and provide solutions are the country's best shield against hopelessness, he said.

He emphasized that the night recognized not only 8 winners but also the unbeatable spirit of Filipinos who rise above paralysis to move society forward.

Review the event as it unfolded in Rappler's live blog.