Naprey Almario: Behind the rolling chair 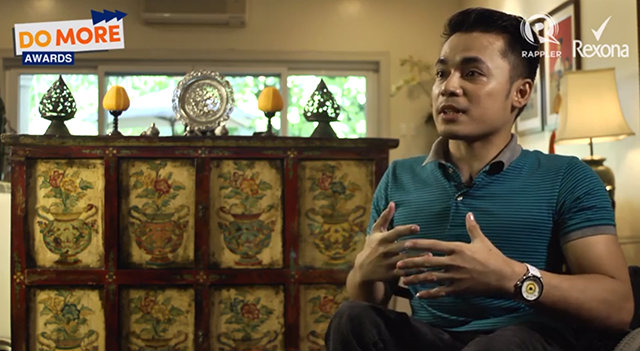 Naprey Almario is best known as the dancing, “strong-wheeled” housemate who joined Pinoy Big Brother (PBB) two years ago. Since then, he has become a staunch advocate for persons with Disabilities (PWDs), clamoring in their behalf for better accessibility all over the country.

As a child, Nap – as he prefers to be called – spent his afternoons like most other kids: playing outdoors, dancing, and running like the wind.

But when he was 8 years old, he acquired polio. Nap became paralyzed from the waist down. From then on, he lost his ability to walk, dance, and run – forever.

So he became inspired to reach out to others like him. Eventually, he realized that there was a purpose in his predicament.

Watch a profile video of Naprey and the other finalists of the Luminary category below.

Becoming a symbol of hope

Two years ago, Naprey became part of the reality show that involved staying inside a house filled with strangers and cameras following his every move 24/7. Although Nap didn’t win, he had the chance to meet other PWDs who became his biggest fans. In turn, they inspired him to Do More.

After his PBB stint, Nap used his newfound fame to become the spokesperson for other differently-abled citizens. When we met him, he had just participated in the International Day for Disaster Reduction, where he delivered a talk on how PWD accessibility should be part of institutional risk planning. He has made the rounds from Manila to Iloilo, providing insights on how city facilities can be restructured to cater better to PWDs.

He has traveled to Singapore to observe and study the Lion City’s provisions for the handicapped. Upon his return, he hopes to bring home ideas that we can adopt for the country.

In his hometown of Davao Del Sur, Naprey reaches out to people who have a different kind of disability: one caused by poverty and lack of education.

Nap teaches computer subjects to college students, runs an online ESL (English as a Second Language) center for Japanese students, and also spearheads a bi-weekly feeding and learning program for street children in their area.

For Nap, fulfillment comes not from awards or record-breaking achievements, but from the change he sees in the lives of individuals he has helped.

Nap hopes that by inspiring and empowering these people, they can become an indispensible part of society.

‘We are all the same’

Though he is only 25 years old, Nap has a very mature perception regarding his disability. “Physically, obvious na obvious na I’m different from others. Pero lahat tayo may kapansanan. Siguro yung iba emotional yung disability niya, or mental yung disability niya, hindi lang niya na-acknowledge na it’s actually a disability (physically, it’s obvious that I’m different. But we are all handicapped. Others have emotional or mental disabilities that they can’t acknowledge)."

For Nap, to Do More is to focus on the possibility that something good will always happen. He sees the rolling chair not as a limitation, but a chance to share positivity with others.

“I can say I’m already empowered, I’m already inspired to inspire people. So I think it’s about time to share what I have, speak out, encourage them, give them the strength na kailangan nila (that they need).” – Rappler.com