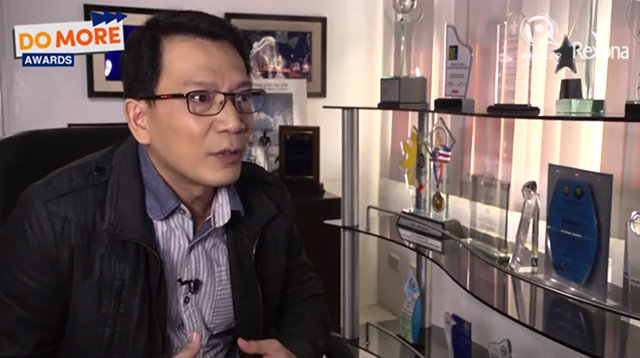 Media sparks change by telling the stories that influence policy and move people to action. This is the reason ‘so what?’ in reportage matters.

But Daniel Razon, or Kuya Daniel as he is fondly called, takes this a step further. He believes the media should do direct public service to the people.

Daniel is the Chief Executive Officer of UNTelevision. Under his leadership, the network became a public service station. Daniel has worked in various television networks - ABS-CBN, GMA7, PTV4 - but he says he only had the opportunity make his ideas a reality when he joined UNTV.

“I already have those concepts in mind during the time that I was still with the big networks, but of course I am not the one calling the shots in those big networks. That’s why I cannot actually give all the inputs that I have. But, when I started managing UNTV, I made it a point that I will be able to inject all the public services that I would like to start,” he says.

Daniel also works with the corporation Breakthrough and Milestones Inc.

Watch a profile video of Daniel and the other finalists in the Luminary category below.

Among the initiatives that Daniel started in UNTv, the most well-known is the “Tulong Muna bago Balita” program that started in 2010. He converted all the network’s news vehicles into news and rescue vehicles. All the crew from the drivers to the reporters were trained to be responders.

Daniel says this effort bridges the gap between reporting and action.

“Most of the time, media people are the first to be in an accident site. But, unfortunately, no one among them can really do something but to just shoot, document everything and come up with their news item. That’s one of the reasons why I decided to come up with this wherein our news people are capable of retrieving people from being pinned down in a car accident and to be able to transport them to a hospital from the point of accident,” he adds.

Daniel initiated many other public service initiatives in UNTv. These include full scholarship programs for students, free public transportation, free roving medical and legal consultation, free medicine, livelihood and feeding programs, and schools. They have also made their ambulances available to responders during calamities.

Daniel sustains the budget of the company’s efforts through concerts, indie films and production events with the support of NGOs and the Church of God International, popularly known as Ang Dating Daan.

Daniel believes doing good is a responsibility. He says news and commentaries should do more than just raise awareness.

Daniel says his biggest inspiration is God and his faith.

“God knows our heart. I just focus on the things that I have to do. You cannot please everyone, but you should not consider this as a distraction. (You) just have to go on and push through with whatever (you) have started because what is important is for you to be able to finish it,” he adds.

He defines doing more as taking every opportunity to do good.

Daniel concludes, “Even if you’re just doing little things but you’re doing it with every opportunity you get, at the end, you will find that you have done a lot of things already.” - Rappler.com