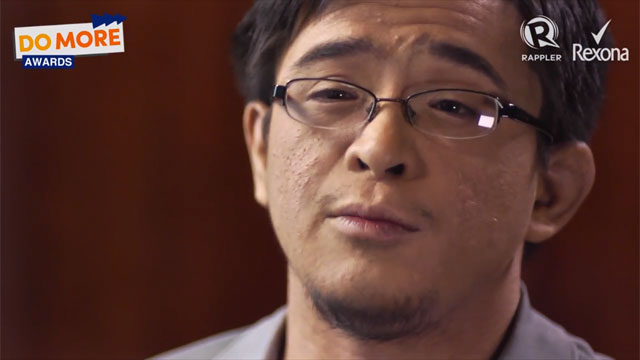 Matthew Cua was described as a man whose “words don’t end at just mere discussions but translate into actions that make a real impact in the country.”

True enough, this Innovator finalist is making ripples in the field of science and technology. Cua is managing director of the Ateneo Innovation Center (AIC), founder and Chief Executive Officer of Skyeye Inc. and CTO of Awesome Lab Inc.

Matthew leads the AIC in its goal to bridge the gap between the academe and industry, while promoting innovation and creativity among the different stakeholders in the Ateneo community.

Skyeye, on the other hand, is a company that “creates flying robots to help people make better decisions.” This is mostly done through mapping infrastructure for electricity lines, for government institutions and watershed management, for real estate and for engineering companies.

Matthew describes Awesome Lab as a “zoo of geeks,” where all members are encouraged to pursue any product or innovation that they fancy.

Matthew says he realized the need for technological solutions to the country’s problems while he was in college. This is the reason he started his companies.

“We’re facing problems that the world has never seen before like climate change, food security, urbanization...how do we solve all these? Most of them are grounded on the world, on basic ecology, scientific inquiry and they are usually solved by processes, techniques, products, or solutions that are based on technology and the sciences,” he adds.

Watch a profile video of Matthew Cua and the other finalists of the Innovator category below.

Matthew is a firm believer of action. His research doesn’t remain within the laboratory. He makes sure they improve people’s lives and help solve common problems.

In Leyte, for example, Matthew and his team in Skyeye mapped rice fields for infrastructure development, which gave farmers easier access to infrastructures and equipments they need in farming.

Matthew has also produced, through Skyeye, maps that were used for road network building and beach building in the Visayas.

“We have done a lot of work on river erosion, monitoring and coast line planning of mangrove reforestations using the maps we have generated. We worked with different NGOs, government officials, and even private industries to help them plan out infrastructures in the most cost-effective manner,” Matthew says.

Despite his achievements, he says he finds fulfillment in the simplest things.

“Whenever we work in the rural areas, when we need to get images of the barangay somewhere in Mindanao provinces, even here in Luzon, we show them a map of their houses and they become so amazed to see where their houses are. In fact it helps them understand why we’re building roads, helps them become more aware of their neighbors and the other stuff around them,” Matthew says.

Matthew admits that being a tech company in the Philippines is a hard task.

“The fact that we’re a hardware company building robots is by itself the toughest challenge... Although we talk about technology all the time, the Philippines is not that friendly in creating start-ups, technology based organizations,” he says.

He says Filipino culture is not grounded on technology but on personal relationships. He believes that there are still a number of Filipinos who are afraid of technology and change.

“New technology always comes with risks and Filipinos aren’t usually that risky. We still have a high-risk aversion culture here. Failure is usually not an option. Though that is slowly changing over the last years, it is still something we have to work on,” Matthew adds.

Matthew also cites funding and getting clients as challenges due to the fact that Filipinos trust tech brands from other countries.

Matthew says technological solutions can only do so much. Real solutions come when people think outside the box.

He says inventions and social innovations should be a collective effort.

“When you think of creative problem solving, it’s all about putting different people together, thinking outside the box together and solving problems in a multi-disciplinary way. There are no problems today that can be solved by one person only – it is actually a team effort,” Matthew adds.

He takes his definition of doing more from his Jesuit education.

“It’s Magis - trying your best in everything that you do, pushing the boundaries. Doing more means doing more and pushing yourself farther and farther,” Matthew says. - Rappler.com