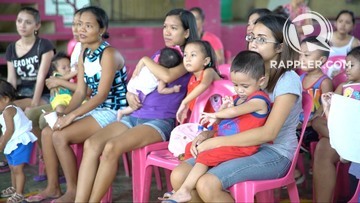 Proper nutrition during disasters: Is it possible?

'In an orphanage in Laguna, children are being fed with whatever was being given to them by donors. See what happens during their Cookfest.'

COOKFEST. The Cookfest gave students in Laguna, especially the orphans, a taste of the food that they really should be eating, if they were to eat healthily. All photos by Chris Quintana and Kimmy Baraoidan/Rappler.com

MANILA, Philippines – “You are what you eat,” the famous saying goes. This phrase was popularized in the early 1940s by nutritionist Victor Lindlahr, who advocated the idea that the key to good health is eating healthy food. It sounds easy as pie. In reality, though, the situation is much more complicated.

For those living under the poverty line, healthy foods are hard to come by. (READ: 'Pinggang Pinoy')

Organically grown produce and meats from organically raised animals are more expensive because producing them costs more. Those who only have enough money to buy food for, at best, one meal per day have no choice but to settle for cheaper food that will get their families through the day: instant noodles and canned sardines. And that’s on a good day.

Most days, meals consist of just rice and soy sauce or salt. Imagine if a natural disaster struck. What else would be left for them to eat?

July was Nutrition Month, and this year’s theme is “Kalamidad paghandaan: Gutom at malnutrisyon agapan” (Prepare for calamities: Coping with hunger and malnutrition) – a very timely one, as Typhoon Glenda had just ravaged Southern Luzon.

Rice fields and farms were flooded, trees were uprooted, and small grocery stores and sari-sari stores had their goods soaked. The price of bangus (milkfish) dropped to P30/kilo a few days after the typhoon. (READ: On nutrition and disasters)

Gallons of ice cream at a small ice cream shop were being given away because the owner could no longer store them due to an indefinite power outage. Bread and pastries from bakeries were almost sold out, as those were the only food readily available for people to buy.

The least of everybody’s worries was if the food that was available was healthy or not. The important thing was to get something that would calm down their grumbling stomachs.

In an orphanage in Laguna, children are being fed with whatever was being given to them by donors. They can’t really be picky since they rely purely on donations. They do not have their own budget to speak of. The orphanage is being run together with a sectarian school, and the orphans get their education from there with the school’s regular students.

Recently they celebrated Nutrition Month by holding a Cookfest with each class asked to prepare healthy and nutritious foods, which were judged based on nutritional value, economical value, and presentation.

Preschool students were dressed in their favorite costumes, and everybody, including teachers, parents, and staff, partook of the hearty meals.

The Cookfest was held just a little over a week after Typhoon Glenda hit the area. Most of the food prepared consisted of whatever fish, vegetables, and some fruits available at the time – all of which were bought using funds the students contributed for the event.

Electricity had just been restored in the school, and parts of Southern Luzon still have no power.

During the event, though, children were still munching on their favorite salty or sweet snacks, which were being sold at the school canteen or have been brought to school as their baon. Nevertheless, the Cookfest gave the students, especially the orphans, a taste of the food that they really should be eating, if they were to eat healthily.

It is important to teach proper nutrition at a young age so that children will become aware about the impact of their food choices on their health in the long run. However, most children have taken a liking to chips and sweets. Health education should start from the home.

Looking at the bigger picture, nutrition is only secondary to supply and access. Unhealthy foods abound, which are usually cheap. What choice is left to a minimum-wage worker who has plenty of mouths to feed? – Rappler.com

Chris Quintana is A former member of the Philippine photo collective called Quadro. He is a senior staff photographer for the International Rice Research Institute (IRRI) and led its photo and video unit until 2013.

How can we help fight hunger? Send your stories and ideas to move.ph@rappler.com. Report what LGUs or schools are doing, recommend NGOs, and share your creative solutions. Be part of the #HungerProject.