Facebook Twitter Copy URL
Copied
Government designs an operational plan that anticipates, in detail, what could happen if an earthquake strikes along the West Valley Fault and outlines the role each agency or sector will play in such a scenario. Get to know this plan so you can plan your own survival strategy

MANILA, Philippines – Experts say that a 7.2-magnitude earthquake along the West Valley Fault, a fault line that cuts across Metro Manila, can happen within our lifetime.

To prepare for such a powerful quake, the Metropolitan Manila Development Authority (MMDA) came up with Oplan Metro Yakal, an earthquake response plan based on scenarios experts believe could happen if the West Valley fault moves.

Metro Yakal outlines the responsibilities of government agencies, local government units and even the private sector when the “Big One” comes.

It also creates a task force that will oversee operations and response in the National Capital Region in the event of an earthquake and outlines the operational workflows of this task force.

According to the Metro Manila Earthquake Impact Reduction Study (MMEIRS), A 7.2 magnitude earthquake along the West Valley Fault is expected to leave 33,500 people dead due to damaged or collapsed structures.

Another 18,000 could perish as fire breaks out in various parts of the city. On top of this, over 115,000 people could be injured. (READ: What dangers await when the West Valley Fault moves?)

This mega-disaster will also likely cripple many services and even government offices located in the nation’s capital. As in the Nepal quake, it is expected that hospitals and emergency service providers will be overwhelmed. The Task Force created to prepare for and carry out humanitarian aid missions in the NCR in the event of a 7.2 magnitude earthquake is called “Task Force Rainbow.”

Task Force Rainbow is chaired by the head of MMDA, currently Chairman Francis Tolentino, to be assisted by the Office of Civil Defense.

Task groups were created to take on the following functions:

These tasks will be done in cooperation with national agencies based in NCR such as the: Taking into consideration a scenario predicted by the MMEIRS study which indicates that Metro Manila could be split into 4, Metro Yakal divides the metropolis into 4 quadrants.

A sub-task force will be deployed to each quadrant in order to strategically deploy resources. Each quadrant will have its own Sub-Task Force Commander.

The quadrants follow the river systems in NCR which are highly prone to bridge collapse and liquefaction. The divisions also consider the fact that the West Valley Fault traverses Quezon City, Makati, Marikina, Pasig, Taguig and Muntinlupa.

“Sinundan natin ang contour ng Pasig River dahil ito ang most likely na cause ng separation due to bridge collapse. (We followed the contour of Pasig River as this will likely cause separation due to bridge collapse.) These areas are also prone to liquefaction which could damage structures,” Ramon Santiago, consultant for disaster risk reduction and management of MMDA, told Rappler.

The areas of responsibility of each of the 4 sub-task forces are shown below:

When the earthquake strikes, the commanders will be staying in Incident Command Posts (ICPs) assigned to their quadrants and will take charge of the response plan.

Meanwhile, the Task Force Rainbow Commander will be staying at the MMDA Head Office which will serve as the central command post.

Each ICP serves as primary staging areas where goods, equipment and other resources will be stored. These will also be the assembly areas for responders.

The map below shows the location of the ICP staging area per Sub-Task Force.

Aside from the 4 primary staging areas, the other staging areas within Metro Manila are shown in the map below.

The MMDA warns that when an earthquake strikes, people should know how to help themselves. This is because agencies tasked to provide emergency services may be not be able to respond immediately to cries for help.

Individuals and families are advised to prepare their own survival plans, and to participate in the drills. (READ: Earthquake tips: what to do before, during, and after)

Beyond that, the first ones they should expect on the scene should be the barangay leaders, followed by the city governments.

Other regions assigned to help NCR

A crippled Metro Manila will need outside help. Without previous arrangements, this could be difficult to get because scenarios predict that telecommunications, bridges and roads that connect the metropolis to surrounding areas could also be severely damaged. (READ: What dangers await when the West Valley Fault moves?)

When the Luzon Quake hit the cities of Baguio, Cabanatuan and Dagupan in the 1990s, survivors recalled having difficulties getting in and out of these cities because bridges and roads were  also destroyed. (READ: Sonia Roco: Eyewitness to the 1990 Luzon earthquake) Authorities expect that Metro Manila could also be similarly isolated.

Metro Yakal also anticipates that the surrounding regions (3 and 4) will probably be as badly hit as the metropolis and will have to deal with their own local disaster concerns.

For the East and West sub-task forces, resources will be coming via the North and South Quadrants.

After the quake, air and seaports are expected to not be operational. Thus, the airport in Clark and the seaport in Subic will be used as main entries for foreign aid. 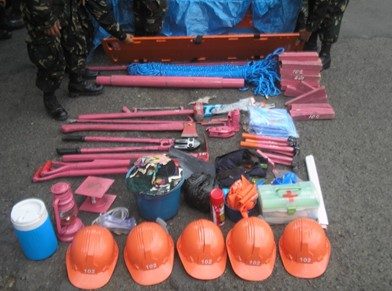 According to MMEIRS, a substantial number of buildings, particularly residential buildings, in Metro Manila are highly prone to structural damage. To a large extent this is because many residences are built without the benefit of expert supervision.  (READ: Part 1: Can your house withstand major earthquakes? and Part 2: What makes buildings earthquake-ready?)

The MMDA expects that when the Big One happens, responders will have to deal with collapsed structures and debris. To aid responders, various Disaster Response Equipment and Tools Field Storage Units (DRETFSU) have been pre-installed in different parts of Metro Manila.

DRETFSUs contain basic tools such as nails, hammers, flashlights, first aid kits, water jugs and hard hats among others. These will be used to help their way in buildings and structures.

See map below for the location of DRETFSUs:

All the plans need to be tested and practiced to ensure that when the Big One strikes, people will not panic and will react accordingly.

In preparing for the possible scenarios, MMDA calls everyone to participate in the Metro Manila-wide earthquake drill on Thursday, July 30, 2015. (READ: #MMShakeDrill: Tapping the youth for earthquake response)

Metro Yakal and local contingency plans will be simulated during the Metro Manila-wide earthquake drill on Thursday, July 30, 2015.

Later in the evening, Pasig City will have its own simulation of the quake, according to Pasig disaster manager Richie Van Angeles.

Authorities hope that through these simulation exercises, people will know what to do when an big earthquake hits the metropolis. – Rappler.com with reports from Aika Rey