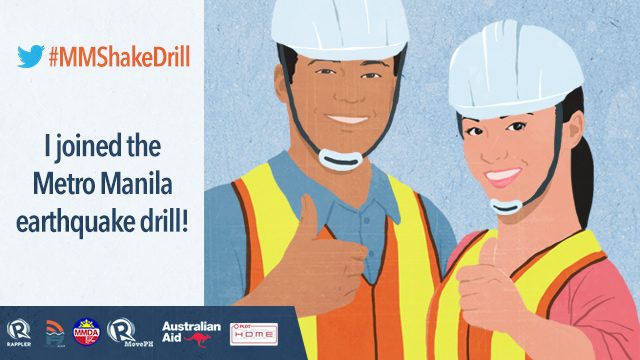 Dubbed #MMshakedrill on social media, the Metro Manila Shakedrill racked up over 2.1 billion impressions or views from 5:00 am to 3:00 pm on Twitter, according to Rappler’s social listening tool Reach. On Twitter, “impressions” means “the times a user is served a Tweet in timeline or search results.”

At least 14,646 Twitter users posted nearly 34,000 tweets, pushing #MMShakeDrill to the top of the trending topics list in the Philippines as the drill was being conducted from 10:30 am to 11:30 am. The drill’s official hashtag also became the 3rd trending topic worldwide. International observers called the earthquake drill, which was initiated by the Metropolitan Manila Development Authority (MMDA), a good first attempt. All 17 local government units participated in the massive simulation of how disaster officials should respond in the event of a powerful quake striking the metropolis.

Rappler and its civic engagement arm MovePH, the official social media partners of MMDA for this event, helped crowdsource and spark conversations around the drill efforts. During the exercise, government and private sector earthquake activities were plotted on MovePH‘s Project Agos Alert Map, which has incorporated the MMDA’s hazard maps for Metro Manila.

According to MMDA, the drill sought to foster a culture of preparedness among residents in Metro Manila in the event of a 7.2-magnitude earthquake caused by the movement of the West Valley Fault. (READ: All you need to know about preparing for earthquakes)

Many netizens, including online personalities, actively shared how they participated in the earthquake preparedness exercise.

I think too many ppl failed to realize how important this #MMShakeDrill is.

I don't want it to happen. But reality is we have to prepare ourselves. #MMShakeDrill

Some practiced the duck, cover, and hold position which was part of the drill:

Others posted their thoughts about the drill:

a great drill! preparedness and awareness is the key for safety! and i'vet my neighbors and lots of cutie #MMShakeDrill #KingswoodCondo

I'm not so sure if our barangay is participating in the drill. I'm still on my bed & idk whether to prepare or go back to sleep.

The https://twitter.com/hashtag/MMShakeDrill?src=hash“>#MMShakeDrill was a success!

Another nighttime drill was conducted Thursday at the Ortigas Business District in Pasig City.

Renato Solidum, head of the Philippine Institute of Volcanology and Seismology (Phivolcs) said he hoped the drill would convert people’s awareness of the effects of a quake into actual preparedness in the event of a real disaster.

How did you participate online and offline? Let us know in the Comments section below. – Rappler.com