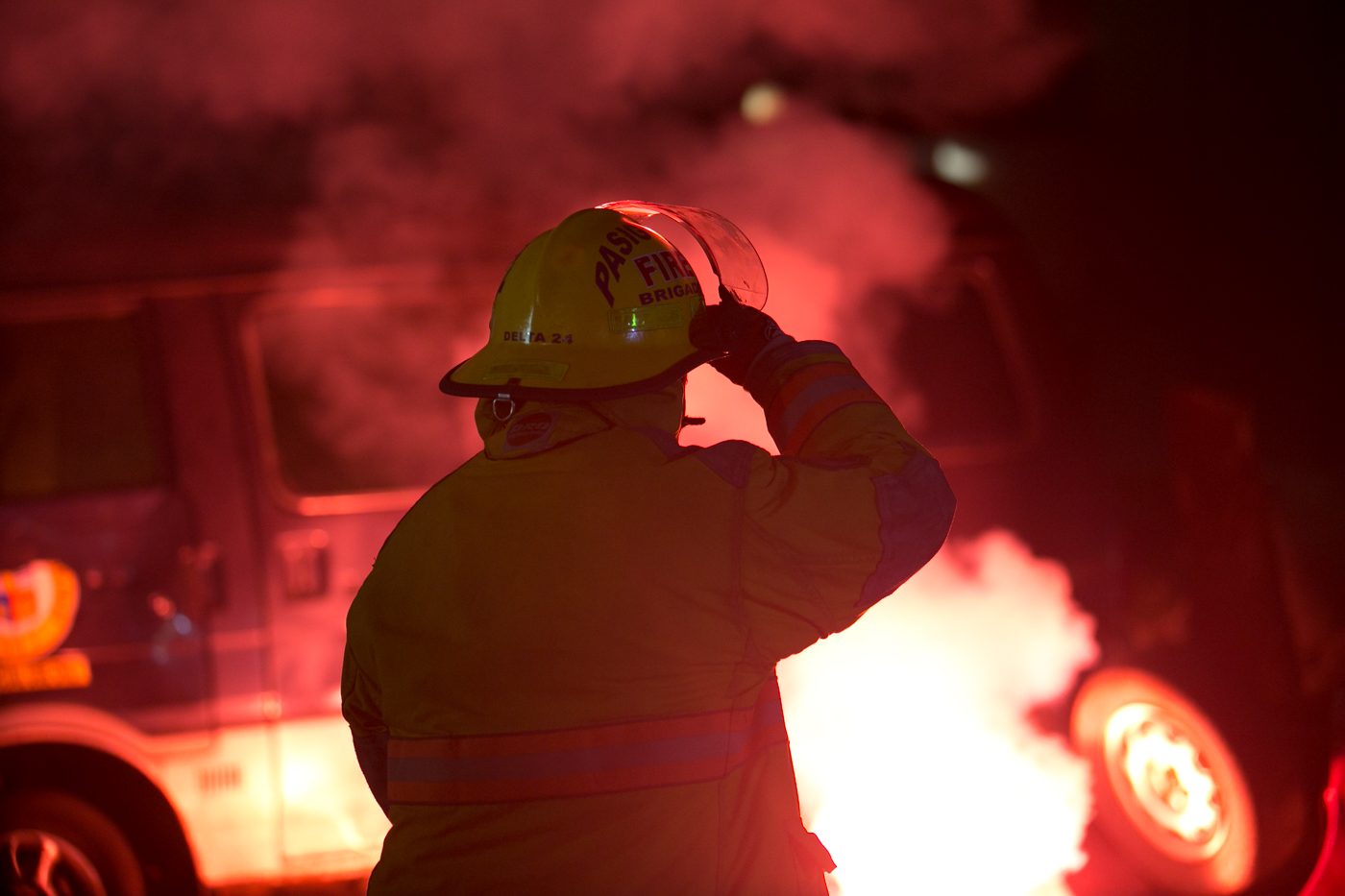 MANILA, Philippines – It was a night to remember.

Pasig City’s drill came after the Metro Manila Development Authority (MMDA) conducted a metro-wide earthquake drill in the morning, and is the first night-time drill conducted in the city’s histroy.

At 6:00 PM, two of Ortigas Center’s busiest roads, Exchange Road and Jade Drive, were completely closed to traffic. Parts of Julia Vargas, San Miguel Avenue, and Pearl Drive were blocked off as well.

Sirens rang at 8:00 PM, marking the beginning of the drill. Lights along the street were closed, lending an eerie atmosphere.

In the dark, at least 35 “victims” were spread across the open road with various injuries. A series of rescue vehicles and personnel rushed into the scene. Although seemingly chaotic, rescue teams moved with precision and speed.

Multiple scenarios were simulated. One group, for example, had to be “rescued” from a “burning” floor at the Philippine Stock Exchange Center. Another individual was on a stretcher and was rappelled down the building by rescue personnel. Responders also had to rescue a survivor pinned under an overturned vehicle.

In the parking lot across the old Philippine Stock Exchange building, medics from Pasig City set up three field hospital tents in 12 minutes. Emergency medical teams were deployed to pick up and treat the survivors. Doctors at the triage section had to determine the gravity of the injuries of the patients and the level of care they needed.

The multiple scenarios were as close to reality as the organizers could make them. While the activites were largely scripted, responders still had to react to new information and unscripted scenarios.

Disaster managers from other cities and observers praised the city for the smooth conduct of the drill. Martin Aguda, an emergency management consultant, said the drill highlighted the close coordination among all the different police, medical, fire, and rescue units in the city, which contributed to the city’s overall preparedness to handle any crisis.

Thursday’s drill was a culmination of years of preparation and training.

After Pasig City was inundated by Typhoon Ondoy (Ketsana) in 2009, it invested heavily in disaster preparedness and flood mitigation measures. Today, it has one of the most modern disaster management systems in the country. In 2015, it won the National Disaster Risk Reduction Management Council (NDRRMC) Gawad Kalasag award for Best City Disaster Risk Reduction and Management Council.

Pasig City’s CBD lies close to the West Valley Fault, a 100-kilometer fault line that runs from Bulacan to Laguna. In May 2015, high-resolution maps revealed that 57 residential areas are traversed by the fault. Six of these subdivisions are found in Pasig City. National Disaster Risk Reduction and Management Council Executive Director Alexander Pama said the drill was a success. He added it could be a showcase for other local governments on how to conduct drills at night.

(What we saw here in Pasig is good because the necessary equipment was there. More importantly, systems were in place according to protocol and established concepts. It is also important that the incident command system was emphasized.)

Meanwhile, Mayor Eusebio was particularly impressed with the Social Welfare Office’s contribution in the drill.

(Not only did they efficiently register the participants in this drill – they also had a tent for their child welfare and women’s welfare programs and had supplies of food, a community kitchen, and an evacuation tent.) According to Eusebio, disaster drills are done yearly in Pasig, with more civilians participating every year. Currently, the local government is planning to acquire more equipment that can help responders reach the higher floors of buildings in Pasig’s CBD.

With the comprehensive drill, Pama said that the improvement has been vast, or “in a scale of 1-10, from one bigla tayong tumalon (we jumped to) 9.5.”

The important next step, Pama stressed, is to sustain this trend and gradually increase the number of drills to a best-case scenario of two metro-wide drills a year. However he stressed that recently concluded drills like the Nationwide Earthquake Drill and Pasig City’s night drill are good starts. — With reports from Lou Gepuela, Monyeath Reath, and Mono Khan/Rappler.com

Frances Sayson is a Rappler intern