The OEC is here to stay, OFWs in HK told 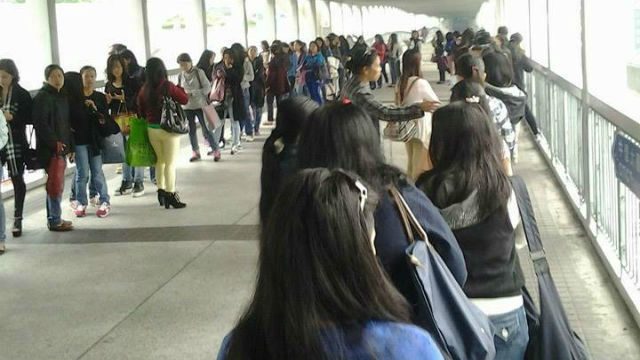 HONG KONG – Filipino workers in this city who expect the Overseas Employment Certificate (OEC) to be phased out soon are in for a big letdown.

Worse, long queues during peak seasons appear to be here to stay as Hong Kong lags behind other OFW destinations in online OEC applications.

Philippine Overseas Employment Administration (POEA) chief Hans Leo Cacdac said during a forum with Filipino community leaders on August 7 that there are no plans to scrap the OEC, a piece of paper worth $20 or P100 that is crucial to every worker vacationing back home in the Philippines.

He made this declaration in response to a question from Bayan Hong Kong’s Eman Villanueva about Cacdac’s previous statements that OEC would soon be phased out.

His statement appears to contradict a blog post he made way back in August 2013, in which he said: “We are working on a system where an OFW in our database with updated OWWA [Overseas Workers Welfare Administration] etc won’t need an OEC. Give us ’til [the] 1st half of 2014”.

Even Labor Secretary Rosalinda Baldoz said in various media interviews at the same time that there were plans to integrate the OEC into the payment for OWWA membership so there would be no more need for OFWs to queue up and pay separately for it.

During the forum, Cacdac suggested making the BM Online, the web-based OEC application system, more accessible to OFWs in Hong Kong to avoid the long queues during the seasonal surge in applications.

Statistics from the Department of Labor and Employment (DOLE) show that as of August 7, 153,152 OFWs have enrolled in the new system.

Of the top 10 OFW destinations where BM Online was used, Singapore and the United Arab Emirates were the top two, while Hong Kong was the tenth.

Villanueva suggested to Baldoz and Cacdac that they extend their stay in Hong Kong so they could see for themselves the long lines and hours of queueing endured by the workers just to obtain the certificate.

Cacdac said the long queues would be resolved once BM Online has become fully implemented in Hong Kong. He said what is needed is to find a way to make the system more accessible to the users. – Rappler.com

This story is republished with permission from The SUN-HK, a content partner of Rappler.