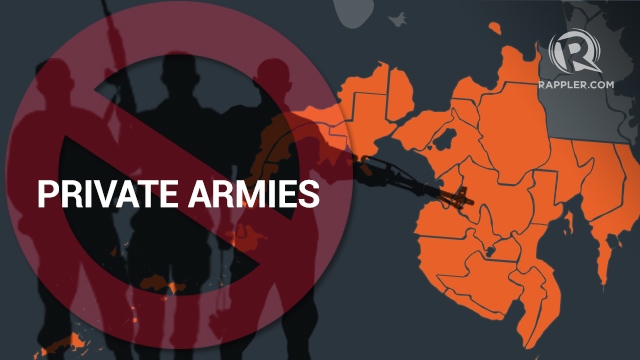 MANILA, Philippines – Malacañang has activated a task force that will disband private armed groups in the proposed Bangsamoro core territory and adjacent regions to “stabilize” the security situation in the area.

The Office of the President issued Memorandum Circular 83, dated September 2 but released only on Tuesday, September 8, creating the National Task Force for the Disbandment of the Private Armed Groups (NTF-DPAGs) in the areas of the proposed Bangsamoro and in Regions 9, 10, 11, and 12.

“There is a need for the creation of the National Task Force that would focus on disbanding the PAGs in the proposed Bangsamoro core territory and adjacent regions in order to stabilize the security situation,” MC 83 read.

MC 83 said that while law enforcers have been waging a “relentless campaign” against private armies, the “menace remains.”

It said this is “because the major causes which primarily contribute to its proliferation such as very low level of human security, gun culture, ‘rido’ or clan war, political dynasties and the use of military and police auxiliaries, still exist in some affected communities.”

OPAPP said the normalization process is not in the original draft of the proposed Bangsamoro Basic Law (BBL), as it is part of the mandate of the executive branch and does not require additional legislation.

MC 83 said that a private armed group refers to “an organized group of two or more persons, with legally or illegally possessed firearms, utilized for the purposes of sowing fear and intimidation, and violence for the advancement and protection of vested political and economic interest.”

Under MC 83, the NTF-DPAGs “shall be in charge of policy, planning and implementation of the program for the disbandment of the PAGs including coordination with the relevant bodies pursuant to the CAB and other entities as may be necessary in accordance with the schedule provided in the Annex on Normalization.”

Chaired by the interior secretary, it will have as members representatives from the Department of National Defense, Department of Justice, National Intelligence Coordinating Agency, and Presidential Anti-Organized Crime Commission; the government chief peace negotiator; and the National Bureau of Investigation chief.

From the Philippine National Police, the members include the Director for Intelligence, Director for Operations, regional regional directors in the Autonomous Region in Muslim Mindanao and from Regions 9 to 12, and the PNP Focal Team Head for the Peace Process.

The OPAPP is tasked with  helping develop a monitoring and reporting system to “determine the development and level of achievements of the activities designed for the dismantling” of the private armed groups.