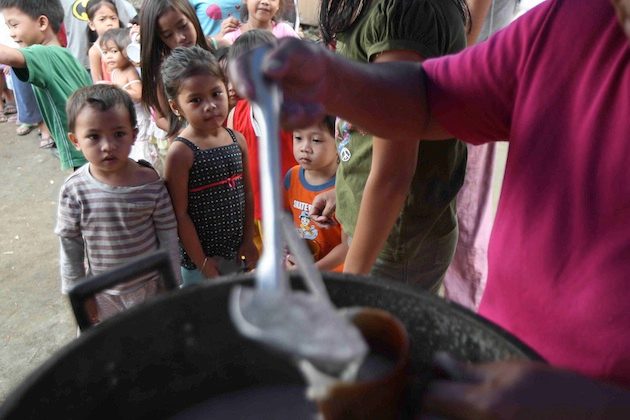 MANILA, Philippines –  The Sustainable Development Goals (SDGs) include ending hunger and malnutrition by 2030. But given the state of nutrition of Filipinos, what can the Philippines achieve in 15 years?

The country does not need to look far to see proof of how hard work can help end hunger and malnutrition despite limited time, according to Save the Children country director Ned Olney.

The “dramatic change” in Southeast Asian countries, he said, can also happen in the Philippines.

“We have neighbor-countries that were able to end or even reduce malnutrition within a few years,” Olney emphasized. “In 15 years, if you really attack, you would be able to achieve these goals.”

Zero hunger and improved nutrition fall under SDG #2. Also known as the Global Goals set by the United Nations, the SDGs include 17 targets touching important issues across countries. (READ: Sustainable goals: From MDGs to SDGs)

Despite what seems to be an unchanging face of malnourishment, Olney and other nutrition experts remain optimistic that the Philippines faces a future of zero hunger and malnutrition. (READ: What’s next for hunger and poverty after 2015?)

Data from the National Nutrition Survey (NNS) of the Food and Nutrition Research Institute (FNRI) show that there has been no significant change in stunting – a sign of chronic malnutrition – in the Philippines for over 20 years. (READ: State of PH nutrition: The last 5 years)

Meanwhile, the latest NNS showed that two out of 10 children under 5 years old are underweight, while 7 in 10 Filipino households do not get the right amount of nutrients. (READ: More Filipinos eat less – survey)

Action Against Hunger (ACF) Nutrition coordinator Dr Oscar Fudalan stressed that efforts need to be improved among sectors if the country wants to change.

“We’ve been on status quo for a long time on malnutrition,” he said. “We’ve been asking ourselves, why is it that kind of peak, a significant decrease, is so elusive?”

The Millennium Development Goals (MDG) that ended in 2015 included the target of halving malnutrition and hunger rates by half. Although the country “nearly” achieved this, the latest nutritional statistics show there is more to be done. (READ: Poverty, hunger still threaten MDG)

“It is not a hopeless case,” Dr Amado Parawan, Save the Children’s Health and Nutrition advisor said. “If we focus and come together, we can definitely end hunger and malnutrition by 2030.” It is important, Fudalan said, that programs and policies the government implements should reach communities.

“We need to put this down to the barangay levels so that they can benefit,” he said. “If we want to end hunger and malnutrition, we need to make sure help goes to those who really need it.”

Assistant Secretary Gerardo Bayugo gave assurances the Department of Health – through the Barangay Health Workers and Barangay Nutrition Scholars – makes sure that communities are taken care of when it comes to health and nutrition. (READ: Who are your barangay nutrition scholars?)

“The DOH has taken a comprehensive, proactive, and holistic approach in dealing with the mandate of reducing malnutrition,” he explained. As a department, it has been our policy to address the problem even before the child is born by implementing effective maternal programs.”

Programs on pregnant women and children are key to a malnutrition-free future. Effective implementation of these programs is key to ending the intergenerational problem of malnutrition. (READ: Filipino ‘shortness’ more than a ‘racial trait’ – report)

“Good nutrition of pregnant women and prevention of pregnancy complication can greatly decrease risks,” Bayugo said. “By decreasing it, we are effectively addressing the problem of child malnutrition at one of its many roots.” – Rappler.com

Ending malnutrition and hunger falls under the 17 Global Goals! How can the Philippines achieve this by 2030? Join the conversation at Rappler’s Innovation +Social Good! Register here.