#StayNegatHIVe: We need to talk about HIV/AIDS

Sep 18, 2015 3:00 PM PHT
David Lozada
Facebook Twitter Copy URL
Copied
Responding to the concerns of our movers across the country, MovePH has partnered with LoveYourself and DM9 JaymeSyfu to launch #StayNegatHIVe, a campaign that aims to raise awareness on the issue of HIV/AIDS in the country 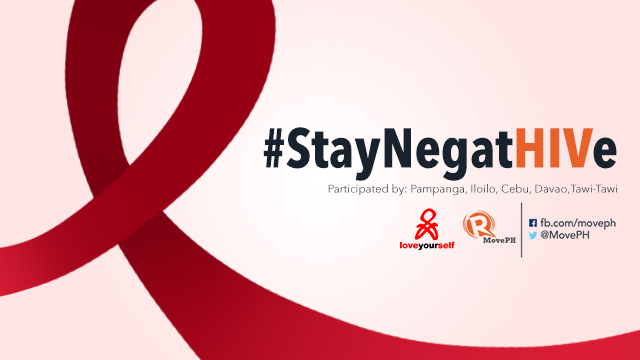 MANILA, Philippines – The human immunodeficiency virus (HIV) is a growing epidemic in the Philippines.

This is supported by data from the Department of Health (DOH), which reported in June 2015 that new HIV cases in the Philippines have grown by as much as 1,038% in as little time as 6 years.

At present, 21 Filipinos are reported to be infected with HIV daily.

There are many factors contributing to this problem. For one, the DOH recorded low condom usage among Filipinos, with over 13% of Filipinos unaware that “using condoms reduces the risk of HIV.”

“Condoms, when used correctly and consistently, are highly effective in preventing HIV and other sexually transmitted infections,” the World Health Organization (WHO) stressed.

It’s a problem that cuts across the different sectors of the country. While men having sex with men (MSMs) are the most prone to contracting the disease, the number of Filipino babies infected with the disease is on the rise.

“Virtually every other country in the world, it’s going down, the number of babies that are infected with HIV. The Philippines is one of the few where it’s actually going up,” World Health Organization (WHO) country representative Julie Hall earlier told Rappler.

According to the 2013 National Demographic and Health Survey (NDHS), only 2% of women have ever been tested for HIV in the Philippines. An HIV-positive mother could transmit the virus to her child during pregnancy, labor, delivery, or breastfeeding. (READ: What you need to know about children with HIV/AIDS)

From the cities to the shores

From June to August 2015, Rappler’s civic engagement arm, MovePH, went around the Philippines to recruit and train citizen journalists and advocates in a series of workshops.

During the workshops, movers were asked to determine problems in their areas that they want to solve through storytelling and online-to-on-ground campaigns. While we got the usual answers – corruption, transportation, and the negative effects of urbanization – one problem consistently came up in all our communities – HIV/ AIDS.

Most of our movers expressed their concern on the growing number of HIV/AIDS infected individuals, that seldom undergo the right treatment, in their areas.

Major cities like Iloilo, for example, lead with the most number of registered cases of AIDS, with 254 infected individuals from 1984 to July 2015. Our mover from Iloilo, Russel Mendez, reported that HIV/AIDS cases continue to rise Western Visayas, with one person getting infected every 24 hours.

In Angeles City, where most of our movers in Pampanga reside, is listed by the United Nations AIDS Organization as a “high priority area for HIV intervention” due to its still booming red light district. (READ: [Dash of SAS] Prostitution or negotiable affection?)

In rural areas like Tawi-Tawi and Basilan, the problem gets more complicated. New HIV/AIDS cases remain undocumented because of the lack of testing centers in their areas.

This, plus the general stigma against the LGBT community in conservative communities like Tawi-Tawi, add to the problem.

Responding to the concerns of our communities across the country, MovePH has partnered with LoveYourself and DM9 JaymeSyfu to launch #StayNegatHIVe, a campaign that aims to raise awareness on the issue of HIV/AIDS in the Philippines. This is a concerted effort with all our movers in Luzon, Visayas, and Mindanao.

Here’s how you can participate in the campaign for its first phase:

Read up. Rappler has plenty of stories and data about HIV/AIDS. Everything to know from how one can get infected with HIV to how to get tested discreetly is available online. Raising awareness and telling people about it are the first steps to countering this epidemic. With every share and every post, we can influence more people to become conscious of the issue. (WATCH: HIV testing walkthrough)

Get tested and encourage others to do so. You can get tested in many clinics for free and in confidentiality. LoveYourself has discreet testing centers you can visit. We are going to publish a map of testing centers particularly in rural areas. You can help us by locating the HIV testing centers in your area!

After getting tested, encourage your friends, especially those who are sexually active, to get tested. It’s been said before: testing positive for HIV is no longer a death sentence. In fact, it is already considered as a “chronic manageable disease” by the UN AIDS Center for Disease Control and Prevention. With treatment and care, people with HIV can live healthy and full lives – and getting tested is the first step. (READ: Thinking about taking an HIV test? Be brave!)

Spread the word. Use the hashtag #StayNegatHIVe to share stories and posts on social media. We’ll be creating infographics in different local languages for this campaign to reach more people in the provinces. You can also participate in a series of online conversations that we will conduct. Just follow the hashtag!

The DOH reported in April 2015 that 6 cities in the country may already reach “uncontrollable” HIV rates. Through this campaign, we hope to prevent more people from getting HIV and stop the epidemic.

What happens next after getting tested? What will you do if you test positive for HIV? These will be answered when we launch the second phase of our campaign in October.

Interested to partner with us for this initiative? Send us an e-mail at move.ph@rappler.com and at david.lozada@rappler.com!