Will PH be the biggest carbon emitter in 35 years?

Sep 18, 2015 5:00 PM PHT
Renee Juliene Karunungan
Facebook Twitter Copy URL
Copied
We have one goal ahead of us and that is zero carbon emissions. Will the Philippines commit to this? The answer will determine the quality of lives of Filipinos in the future 2013 was the most devastating year in recent Philippine history in terms of natural disasters. It was the year we experienced something we had never experienced before.

Typhoon Yolanda (Haiyan), the strongest typhoon to make landfall in recent Philippine history, battered the Visayas region, leaving more than 6,000 people dead. Almost two years after, communities are still being rebuilt; people in the Visayas region are still coping with their losses. Many have left their homes and have learned to fear the water.

Catastrophic events like Haiyan are linked to the changing climate. Climate change as we know today is human-induced, much of it due to human activities that involve burning of fossil fuels such as coal, oil, and natural gas.

According to Michel Jarraud, secretary-general of the World Meteorological Organization, “Many of the extreme events of 2013 were consistent with what we would expect as a result of human-induced climate change.”

“We saw heavier precipitation, more intense heat, and more damage from storm surges and coastal flooding as a result of sea-level rise – as Typhoon Haiyan so tragically demonstrated in the Philippines,” Jarraud said in a press statement.

This brings us to a most important question: What will our future look like as we face the changing climate, and what can we do about it?

The Conference of Parties, a yearly meeting of countries under the United Nations Framework Convention on Climate Change, will be having its 21st year of negotiations in December in Paris, France. (READ: What’s happening in the Paris climate talks?)

Many have been looking forward to this year’s COP as it hopes to bring about a climate agreement among nations. After 21 years of negotiations, overwhelming scientific evidences, and catastrophic events proving that climate change is indeed happening, are we finally ready to take climate action?

During the 16th year of negotiations in Cancun, countries agreed to a long term goal of reducing greenhouse gas emissions to keep global warming below two degrees Celsius,  based on pre-industrial levels. So far, the world has warmed by 0.8 degrees Celsius. 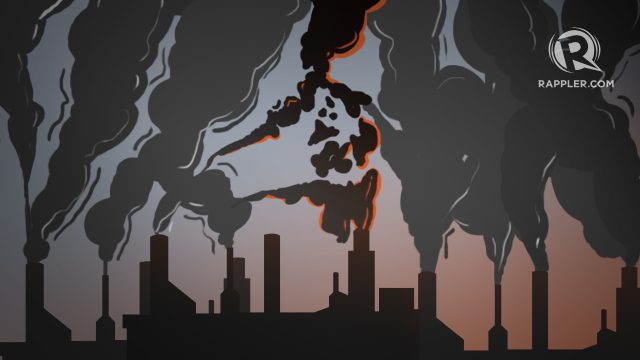 But while countries have started committing to zero carbon emissions by 2050, the Philippines doesn’t seem to be ready with this commitment.

The government has approved more than 50 coal power plants to be built in the country in the next few years. This will supposedly answer the country’s energy needs. Given that an average coal power plant has a life span of 40 to 45 years, this means the Philippines will certainly continue to emit carbon when the rest of the world has committed to zero carbon emissions.

Congo – a country in Central Africa with only 15% of the population with electricity – just committed to decrease ots carbon emissions by 17% by 2030. Ethiopia also committed to an ambitious 64% carbon emission reduction. The Philippines, for its part, seems to be lagging behind in its climate commitments. Instead of emission reduction, the Philippine emissions per capita will rise by over 31% from 2010 to 2030.

Imagine our country, one of the most vulnerable countries to climate change, being the biggest emitter of carbon in the next 35 years. With the rate we are going in investing in coal instead of renewables, who can say that this is impossible? Are we really digging our own graves? Do we really want to pursue a path where we will be the cause of the suffering of our own people?

As countries negotiate to keep global warming below 2°C, countries are also looking at the long term goal of having zero carbon emissions by 2050. Even the G7 countries (Canada, France, Germany, Great Britain, Italy, Japan, and the United States) responsible for much of the carbon emissions, have made a statement about phasing out fossil fuels.

Yes, we are planning for the next 35 years. While some may say that this is looking too far ahead into the future, having this long-term goal is important to ensure that countries are on the same page when tackling climate change.

According to the United Nations Environment Programme (UNEP), if we are to at least have a 50% chance of staying within the 2°C target, countries need to limit carbon emissions to 36 billion tons. However, according to the London School of Economics and Political Science, the Intended Nationally Determined Contributions submitted as of July 2015 “would lead to annual global emissions in 2030 of 56.9 to 59.1 billion tonnes of carbon dioxide.” This is much higher than what the UNEP says our targets should be.

While 35 years is still a long way ahead, all countries should start working now towards the long term goal of zero emissions. The Philippines is not an exception. Our carbon emissions historically may be less than 1% but this does not give us an excuse to continue investing in coal today.

We have one goal ahead of us and that is zero carbon emissions. Will the Philippines commit to this or will it be the biggest carbon emitter in 35 years? – Rappler.com

Renee Juliene Karunungan, 25, is the Advocacy Director of Dakila. Dakila has been working for climate justice since 2009. She is also a climate tracker for Adopt A Negotiator.