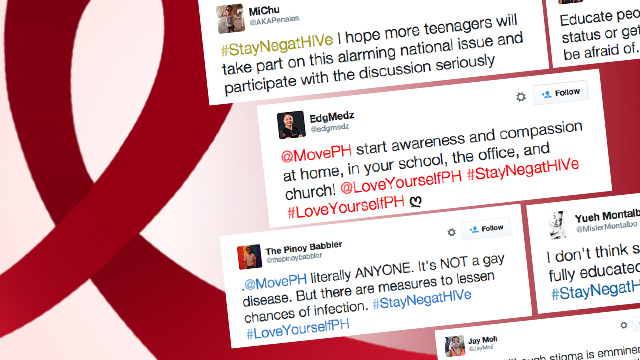 MANILA, Philippines – Netizens and advocates came together on Friday, September 18, to break the silence on HIV/AIDS, as MovePH launched its #StayNegatHIVe campaign.

The Philippines has the fastest growing HIV epidemic in the world, the World Health Organization (WHO) said in 2015. In March 2015, the Department of Health (DOH) recorded 667 new cases, bringing the cumulative cases since 1984 up to 24,376.

Most netizens encouraged fellow Filipinos, especially the youth, to make themselves aware of the issue. Adults and teachers, however, should also be educated on the topic so they can help stop misinformation.

If a friend tells you they’re positive. It means they trust you with their lives. #StayNegatHIVe #ThinkPosi+ive https://t.co/7csLL9ZhdU

I don’t think so as even the teachers are not fully educated about HIV and AIDS. #StayNegatHIVe https://t.co/4byOJkaLev

@MovePH Everybody needs proper education about HIV. People are scared of what they dont know. #StayNegatHIVe #LoveYourselfPH

Another issue highligted is the importance of getting tested. There is no shame in getting tested, HIV/AIDS advocacy group LoveYourself said. At the same time, one’s privacy must also be respected when visiting treatment hubs.

How do you know if you are an HIV carrier? The only way to know for sure is to have yourself tested. #StayNegatHIVe …

Educate people more that knowing your status or getting tested is something not to be afraid of. #StayNegatHIVe

@MovePH although stigma is emminent for those who wants to get tested, it is still their/our responsibility to undergo one. #staynegatHIVe

The biggest battles fought in the HIV/AIDS advocacy is not the disease itself but stigma, advocates said.

For a long time, HIV/AIDS has been called the “gay cancer,” with many Filipinos believing that it is only lesbians, gays, bisexual, and transgender (LGBT) individuals who can acquire it. This, however, has been proven false by statistics and scientific studies.

.@MovePH literally ANYONE. It’s NOT a gay disease. But there are measures to lessen chances of infection. #StayNegatHIVe #LoveYourselfPH

Let us not forget that while it’s important to #StayNegatHIVe, HIV & AIDS are not death sentences if properly treated. #LoveYourselfPH

Whatever the result may be, the person needs to be loved, accepted, and supported, the netizens agreed.

@MovePH being more self-aware, there will always be room to love ourselves more, whatever the outcome is.. #StayNegatHIVe #LoveYourselfPH ღ

@MovePH if negative then #StayNegatHIVe if positive then get treated, live a normal life and stop the spread of HIV. 🙂 #LoveYourselfPH

@MovePH Positive or Negative? It should not matter. A status should not define a person #StayNegatHIVe

We don’t drive them away. We stay close to them. They need us. #StayNegatHIVe

At this stage of the epidemic, not everyone will #StayNegatHIVe. To end AIDS, we need to be inclusive & embrace PLHIVs in the convo.

Awareness is the first step, but having a legislation and supportive government could help keep the advocacy rolling. The Philippine Legislators’ Committee on Population and Development Foundation, Inc. (PLCPD) joined the conversation, urging the government to increase its allocated budget for HIV/AIDS.

The DOH National HIV/STI Prevention Program has a 2015 budget of about P500 million ($11.21 million), 60% of which will go to the treatment of patients. But the PLCPD argued that more funds are needed.

@rapplerdotcom We need more budget. 2.3 B needed annually to end HIV, we only ask for 400 M to be provided in new AIDS law. #StayNegatHIVe

@rapplerdotcom Fighting HIV/AIDS should be an election issue. We should vote for candidates who vow to end HIV #StayNegatHIVe

Contrary to what many Filipinos think, it is not only men who have sex with men (MSM) who are vulnerable to acquiring HIV, but anyone engaging in high-risk sexual behaviors such as unprotected sex.

HIV-positive pregnant women may also pass it down to their children during pregnancy, labor, delivery, or breastfeeding. But this may be prevented through treatment, which is why it is important for women to also get tested.

Some Filipinos also still fall prey to HIV/AIDS myths like:

But such scenarios are not exlusive to the Philippines. HIV remains a “major global public health issue,” according to WHO.  In 2014 alone, 36.9 million people living with HIV were recorded. In the same year, more than a million people worldwide died from HIV-related causes. So far, HIV has claimed over 34 million lives.

#StayNegatHIVe is the first part of MovePH’s HIV/AIDS campaign, a concerted effort between all of MovePH’s communities nationwide, LoveYourself and DM9 JaymeSyfu. We will be bringing in more groups in phase 2, especially those who cater to people living with HIV (PLHIV). –Rappler.com