Facebook Twitter Copy URL
Copied
Dulphing Ogan, a Lumad from Southern Philippines, will join a delegation of indigenous peoples from Asia that will fly to France in December for the United Nations Framework Convention on Climate Change 21st Conference of Parties

CHIANG MAI, Thailand –  It started over coffee like how mornings in his village begin.

“Mayroong gatas (It has milk),” Dulphing Ogan said smiling after sipping from his cup served by the flight attendant, opening a conversation that flowed on until we landed in Thailand.

We were on the same flight to Chiang Mai City, where we attended an indigenous peoples’ workshop on climate change from September 16 to 18.

“In our place, coffee is black and bitter,” the 50-year-old Lumad from Southern Philippines said in Filipino.

Ogan’s family grows traditional coffee, corn, rice, root crops and fruit trees in an upland village in Saranggani province. For years, this has been his family’s way of life and source of livelihood.

“This has sustained our relationship with nature,” Ogan said.

But their traditional practices, including food production, are now disintegrating due to climate change and other factors that worsen it, Ogan noted.

Ogan, together with 4 other indigenous representatives from the Philippines, brought this concern to Chiang Mai, where indigenous peoples from Asia met to prepare for the crucial United Nations Framework Convention on Climate Change (UNFCCC) 21st Conference of Parties (COP21) in December 2015. (READ: What’s happening in Paris in December? 10 things to know)

The Lumad population comprises the majority of the estimated 14 to 17 million indigenous peoples in the country, according to the United Nations Development Program (UNDP).

About two-thirds of the world’s estimated 400 million indigenous peoples live in Asia, according to the International Work Group for Indigenous Affairs (IWGIA). 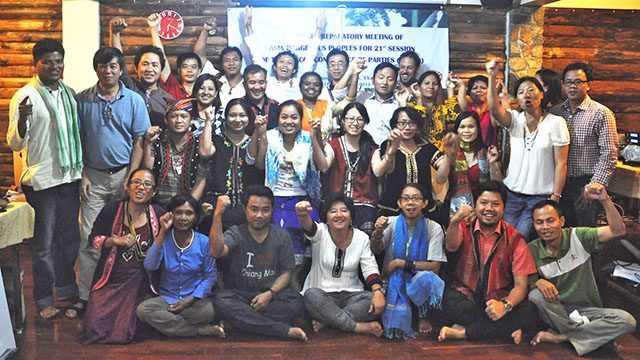 What’s at stake for indigenous peoples

Indigenous peoples have a lot at stake in the Paris climate conference.

In Chiang Mai, Ogan and 34 other representatives of indigenous peoples from 12 countries in Asia discussed the effects of climate change to their communities and solutions they could offer.

In their discussions, their objective was clear: to ensure that their collective voice will find its way into the text of the Paris agreement.

The landmark climate conference seeks to come up with a bold agreement that aims to stop global warming by more than 2°C, a climate tipping point which is feared to cause disasters.

Citing researches and their own experiences, indigenous peoples from Asia tackled how they are bearing the brunt of climate change. The most common effects, they observed, were extreme weather conditions like drought, cyclones, and frequent storms.

They also shared how in varying degrees the effects of climate change are already threatening their ancestral lands, environment, livelihood, and culture:

“As victims of climate change, we want to participate even beyond COP 21 in Paris,” Ogan said.

Tonight, a #Lumad celebrates life with other #indigenouspeoples in Asia. A Naga woman from India dances in solidarity with his struggle to defend his life, land, and culture. #climatechange #humanrights #ChiangMai #Paris #cop21

‘We are not just a vulnerable sector’

Indigenous peoples also noted how climate change is worsening their plight as a marginalized sector in their respective countries.

“Climate change is exacerbating the difficulties already being faced by indigenous peoples in their communities including discrimination, human rights violations, displacement, political and economic marginalization, and unemployment,” the delegates said in a unity statement.

Back at home, Ogan’s fellow indigenous peoples were grieving over the extrajudicial killings of fellow Lumads and an advocate protesting against commercial logging, mining, and land conversions which are among the drivers of deforestation, according to studies. (READ: UN experts on Lumad killings: Unacceptable, deplorable)

Ogan said the Lumad, which dwell in upland villages, are fighting against these “destructive projects” not only because they consider their forest sacred but also because it has saved them from disasters in the past.

(Trees absorb carbon dioxide. It gives life. During the 1997 El Niño, we sought refuge in an area which didn’t dry up because it was in a forest.)

How indigenous peoples like the Lumad protect their forests and other natural resources is an important contribution to climate change mitigation and adaptation, the workshop participants said, stressing that they are not just a vulnerable sector.

#RoadtoParis #COP21: Rukka Sombolinggi from the Toraja people in Indonesia joins other indigenous peoples from Asia in a preparatory meeting for the 21st session of the UNFCCC-Conference of Parties (#COP21). There are 260 million IPs in Asia. Their representatives in the meeting here in Chiang Mai stress that they are not merely a vulnerable sector. They are actors who have traditional knowledge and practices that provide sustainable solutions to climate change. #IndigenousPeoples #Asia

In Paris, indigenous peoples from around the globe will highlight these contributions along with their issues, making sure that their voice is heard in the negotiations and their demands included in the legally binding COP21 agreement and decisions.

“We need to bring on the table our rights, concerns, and contributions. We are managing our resources sustainably, but we are the ones being driven away from our lands,” said Joan Carling, secretary-general of the Asia Indigenous Peoples Pact (AIPP).

Carling, who also represents Asia at the IIPFCC, stressed that indigenous peoples  “need to be in Paris and speak out to States.” – Rappler.com