The problem with Heneral Luna

Sep 23, 2015 12:52 PM PHT
Jan Albert Suing
Facebook Twitter Copy URL
Copied
'Heneral Luna is a provocative, well-meaning piece of Philippine cinema that can also be dangerous for its promotion of hyper-nationalism as the prime solution for the country’s woes'

As a citizen of an irreversibly globalized world, I often find myself cringing each time I watch a film that views “nationalism” as sacrosanct and endorses it. In my opinion, nationalism is like an alcoholic beverage — beneficial only when it is moderate. Too much of it can be counterproductive to the nation itself.

While there are several definitions of nationalism, I refer to it here loosely as one’s loyalty to his or her own nation of birth which is sparsely grounded on language, ethnicity or culture. In this context, nationalism is dangerous because it instigates a structure of social dominance which could eventually incite dangerous domination of others by the arbitrary favored group.

Nationalism can be dangerous because it goes beyond the realms of reason and tends to pit nation against nation (e.g., China-Philippines, Israel-Palestine) for superiority and ethnocentric survival. This makes nationalism hardly any different from racism.

And don’t get me started about the perils of economic nationalism a.k.a. protectionism. 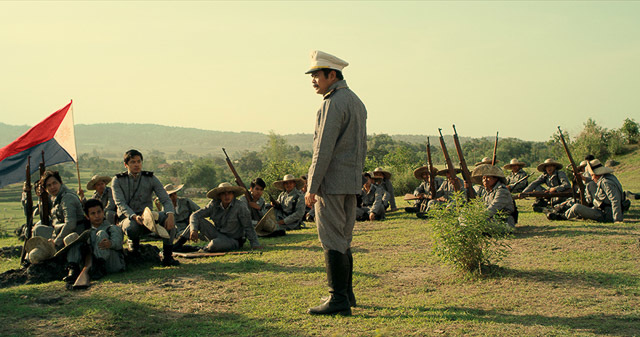 Here lies my problem with Heneral Luna, a provocative, well-meaning piece of Philippine cinema that can also be dangerous for its promotion of hyper-nationalism as the prime solution for the country’s woes.

While admittedly, the invocation of national unity is something else and could help inspire the country’s energy towards a unified goal, this motivation can easily be misconstrued as a call for blind nationalism — which is a thoroughly different thing.

While I’m not sure how much “creative license” director Jerrold Tarog allowed himself in his cinematic adaptation of the life of one of our country’s greatest military generals, it’s plain to see that Heneral Luna’s brand of nationalism is collectivistic. It tends to be fascistic and authoritarian just like Adolf Hitler’s and Ferdinand Marcos’. And having experienced such system first hand, we know enough to know just how damaging that can be to the country.

I am not trying to discount Heneral Luna’s achievement in terms of technicalities and innovation though. Its cinematography is awe-inspiring. Its form suits its content and doesn’t distract from it.

Heneral Luna is certainly an upgrade from the usual historical-biopic films we’ve had in the recent years such as Bonifacio and El Presidente, both of which failed to humanize their protagonists by portraying them like flawless saints of blind patriotism, and in the process, denying them their audience’s empathy.

Tarog’s direction and storytelling allowed us to see General Luna’s own human frailties – his sightless idealism and tendency to see the world as black and white as evidenced by his reluctance to compromise. Truth be told, it isn’t the lack of unity during that period that killed Luna as intimated by the movie, it’s his naïveté and stubbornness.

Filipino nationalism has always been an intricate and variegated phenomenon that remains an enigma even for us Filipinos up to this day.

Maybe the problem is that we, as a nation, try too hard to become something we are not. Maybe the solution to our dilemma is quite simple: the acknowledgment and acceptance of our national diversity. Perhaps that should be our take-off point, and from there, slowly try to unkink the knots along the road towards a united vision. And while national unity sounds pretty damn good, it is simply a means to an end, not an end in itself.

Finally, love is never selfish. And though any form of love regards others, love regards the self as well. I would like to believe that our love of country is a two-way street. That if we love our nation, she will reciprocate that love and will never ask us to sacrifice our happiness for her. And if this is truly the case, then there’s no way our beloved nation will ever ask us to die futilely for her. – Rappler.com

Jan Albert Suing, 25, a Kapampangan living in Makati City, is a graduate student from the University of the Philippines Diliman and works for CSRSDI as a policy research associate.