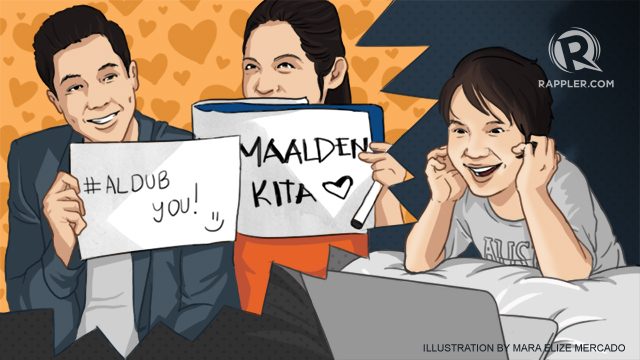 Facebook Twitter Copy URL
Copied
Just like AlDub’s split screen romance, the love of Filipinos who live abroad for their family back home goes beyond the distance and online video calls

BRISBANE, Australia – It is almost midnight in Brisbane. I can hear the sound of the clock ticking as if reminding me to go to sleep. But I refuse to go to sleep. My day is not yet complete.

The winter breeze has yet to leave Australia and for the past few months, I found myself alone in my room, tucked in a duvet at night, hooked on my mobile device to check for any updates on the phenomenon that is: AlDub.

Yes. I have to admit it. I am obsessed with anything and everything about the tandem of Alden Richards and Yaya Dub (Maine Mendoza in real life), popularly known as AlDub.

But more than their love team, I am hooked on their story.

Every night since the craze started in July, I wait like many other Filipino fans overseas until Filipino noontime show Eat Bulaga uploads a shortened 30-minute video online of their popular segment KalyeSerye featuring AlDub’s love story.

Since the video is usually uploaded on the wee hours of the night in Australia, I have already convinced myself to exchange an hour or so of sleep to wait and watch AlDub’s love story unfold before me.

And just before I start to watch the online video, I always make sure to close my windows and lock my door, knowing that my laughter has enough decibels to wake up my sleeping 65-year-old neighbor.

And so the story starts.

For 30 minutes, I am transported back to everything I miss and love about the Philippines. I hear familiar words, recognise familiar places, and remember familiar expressions.

In half an hour every day, I am brought back home.

‘Chivalry is Not Dead’

Admittedly, AlDub in KalyeSerye is a typical love story which most Filipinos love and relate to.

In the story, a helper (Yaya Dub) of a wealthy grandmother (Lola Nidora) is pursued by her long-time crush, actor Alden Richards, who plays himself. (READ: #AlDub: The fun tandem of Alden Richards and ‘Yaya Dub’)

What distinguishes AlDub from other love stories is it capitalizes its storytelling on spontaneous reactions from its character actors using the art of improvisation on live television.

Credits should be given to its writers but also to comedy geniuses – Wally Bayola, Jose Manalo and Paolo Ballesteros – who play multiple characters effortlessly throughout the love story. It also helps that Mendoza, who plays the character of Yaya Dub, reportedly admitted that she genuinely has a crush on Richards. (#kiligpamore)

The almost unscripted and real-life storytelling has been proven effective to its audience in the Philippines and around the world. This is evident with Eat Bulaga’s increased ratings while maintaining trending topics and hashtags on social media platforms. (READ: How #AlDub is breaking the Internet)

But I guess the real success of AlDub goes beyond its ratings and millions of tweets. Eat Bulaga was able to find the right formula in using the popularity of AlDub and to link it to Filipino culture which the audience buys.

But I also understand that AlDub is not everyone’s cup of tea with some even disdaining knowledge of it because of fear of being ridiculed and labelled as “jologs.”

And to be completely honest, I cannot pinpoint the exact reason of my obsession with AlDub, too. But I guess it is probably because the reason is that I have too many reasons to love it.

AlDub reminds us that sometimes, laughter is indeed the best medicine.

Filipino humor is often different from other cultures. And just being able to laugh at familiar jokes you grew up to – be it by your self or with another Filipino – is priceless. Eat Bulaga manages to make me laugh so much that it hurts.

AlDub also reminds us of the importance of family and how it is both the strength and weakness of every Filipino. That just like Yaya Dub, Filipinos are willing to sacrifice their own interest and happiness, for the sake of their loved ones back home.

And cliché as it may sound; AlDub reminds us of unconditional love. And this is especially true for Filipinos overseas like myself, who left many of my loved ones back home.

AlDub is a constant reminder that no barrier, not even a piece of plywood, nor a very long table, can block and stop true love. Just like AlDub’s split screen romance, the love of Filipinos who live abroad for their family back home goes beyond the distance and online video calls.

As AlDub and its fans put it perfectly, “True love is forever.”

And so it is 1:00 am again in Australia and I just finished watching KalyeSerye online. I can hear the clock ticking as if reminding me to go to sleep. I submit to its call. My day is finally complete. – Rappler.com

Ace Tamayo is a journalist and an Australian Clarion awardee. He is currently pursuing his law studies at the TC Beirne School of Law at the University of Queensland in Brisbane, Australia. Ace is a hopeless romantic and believes that true love exists. Ace is AlDub’s No. 1 fan. Follow him on Twitter @AceATamayo