INFOGRAPHIC: From Marcos to Aquino: The cost of war in Mindanao 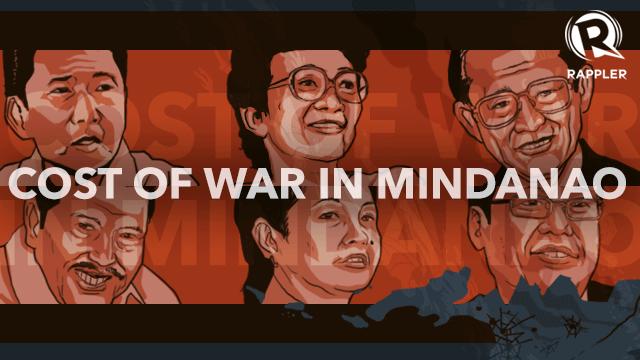 MANILA, Philippines – Peace advocates and negotiators are putting up one last fight to have the Bangsamoro Basic Law (BBL) passed before the Senate and House of Representatives adjourn their regular session on Saturday, October 10.

“Genuine peace with justice is within our grasp and let us not lose this golden opportunity so that long years of conflict will never happen again,” Iqbal said.

In Rappler’s 4-minute animation, we captured the highlights of the 40-year-old conflict:

In the infographic below, we take a look at the consequencies of the armed conflict that spans about 40 years. (READ: TIMELINE: The long road to the Bangsamoro region)

The total economic loss sustained by Mindanao due to the conflict is pegged at about P640 billion ($13.9 million), according to the Office of the Presidential Adviser on the Peace Process (OPAPP).

President Ferdinand Marcos declared martial law in 1972 to contain what he described as growing Muslim and communist insurgencies. In 1976, Libyan leader Moammar Kadhafi witnessed the signing of the Tripoli Agreement that provided a framework for autonomy in 13 provinces and 9 cities in Mindanao. After the 1986 EDSA People Power Revolution that ousted Marcos, the Aquino administration launched peace talks with the MNLF.

In 1989, the Organic Act for the Autonomous Region in Muslim Mindanao (ARMM) was signed into law. In 1996, Misuari, on behalf of the MNLF, signed a final peace agreement with the Ramos government. In March 2014, both parties signed the Comprehensive Agreement on the Bangsamoro (CAB). During the historic signing, President Aquino vowed, “I will not let peace be snatched from my people again. Not now when we have already undertaken the most significant steps to achieve it.”