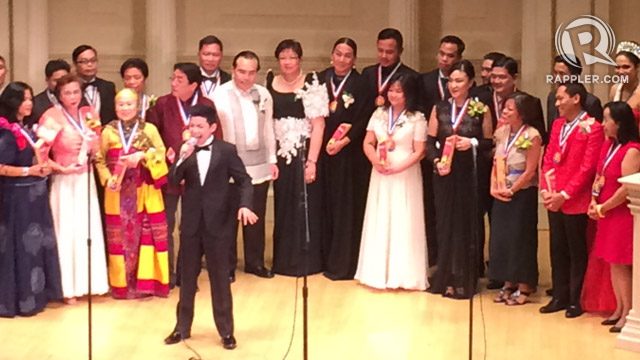 Facebook Twitter Copy URL
Copied
'Every year, we share their stories because they reveal the many facets of the Filipino American experience and what holds our community together'

NEW YORK CITY – The Outstanding Filipino Americans of New York named this year’s batch of 15 organizations and individuals who have “inspired the community with their passion, conviction, and achievement.”

They are led by Human Rights Commissioner Carmelyn Malalis, who is being honored for Public Service; and the PAGASA Social Foundation, Inc. for Senior Welfare & Advocacy. They will be celebrated in a program to be held at Carnegie Hall’s Weill Recital Hall on October 31.

The rest of the awardees are Mark Bustos, a professional hair stylist who offers free haircuts to the homeless during his day off; Maharlika and Jeepney founder Nicole Ponseca, who is widely acknowledged for elevating Philippine cuisine into the mainstream; and Councilmember Jonathan Wong, who at 23 became the youngest FilAm elected to public office in New Jersey.

“TOFA-NY’s unmatched multiculturalism just might be our City’s greatest asset,” said De Blasio in a message.

“In highlighting the key role Filipino New Yorkers play in every sector and throughout all five boroughs, the TOFA-NY awards also showcase the diversity to which New York owes both its singularity and its strength.”

Consul General Mario de Leon, Jr. said the awardees are a “testament to the excellence of Filipinos in every field imaginable, and their significant contribution” to fostering friendly relations between the United States and the Philippines.

Elton Lugay, founder and executive producer of TOFA-NY, said the honorees are selected out of hundreds nominated by the community.

“Every year, we share their stories because they reveal the many facets of the Filipino American experience and what holds our community together,” he said in a statement.

To watch the event, to be hosted by Philippine television personality Boy Abunda, tickets ($60-100) may be purchased via www.carnegiehall.org or call CarnegieCharge at 212-247-7800. – Rappler.com