The Philippines is in the middle of being battered by Typhoon Lando (international name Koppu) as climate negotiations began in Bonn on Monday, October 19. The Bonn negotiations will be the last 5 days of the Ad Hoc Working Group on the Durban Platform where countries negotiate about a climate agreement before the 21st Conference of Parties (COP) in Paris in December.

The COP is a yearly meeting of countries under the United Nations Framework Convention on Climate Change that hopes to solve the climate crisis. A climate agreement in Paris will be crucial to stop global warming below two degrees celsius from pre-industrial levels. The world has already warmed at 0.8 degrees celsius.

However, vulnerable countries like the Philippines, which are already facing climate impacts, are calling for a more ambitious target of 1.5 degrees celcius. At 0.8 degrees of warming, many nations have faced an acceleration on sea level rise, longer droughts, and extreme weather events that have led to much loss and damage. 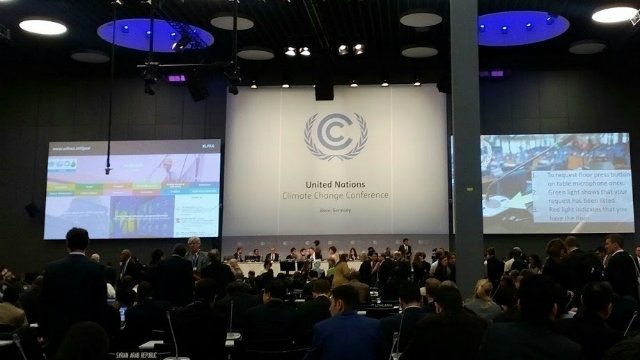 But Paris is not the first time countries have tried to form a legally binding deal that would solve the climate crisis. In 2009, the COP15 in Copenhagen tried but failed to deliver this deal. Six years since then, a lot of catastrophic events have happened because of climate change: extreme heat in India and, extreme rains in Myanmar and the Philippines, and drought in California.

The Philippines was devastated by Typhoon Yolanda (Haiyan) during the COP19 Warsaw negotiations. It was when former climate change commissioner and negotiator Naderev “Yeb” Saño delivered a speech left a great impact at the negotiations.

But in 2014, just as the COP20 in Lima opened, the Philippines once again faced a typhoon (Typhoon Ruby, international name Hagupit). This year, as the last 5 days of the negotiations begin, Typhoon Lando has just made its presence felt in Luzon and is still lingering in the country.

These typhoons coinciding with climate negotiations serve as a reminder for world leaders to start acting on climate change.

While countries are busy debating over the right words to use in the agreement, there are people losing their lives and livelihoods because of climate change.

The last 5 days of the negotiations is very important as it will set the tone of whether Paris will be a success or not. The Bonn negotiations will either set a strong foundation or a shaky ground for a new climate agreement.

Countries have already submitted their carbon mitigation commitments through the Intended Nationally Determined Contributions. When taken together, all countries’ commitments are still not enough to reach the below 2ºC target. The current negotiating text also does not see a lot of commitment from developed countries, which reduced loss and damage to only 3 lines.

The last Bonn negotiations that happened in September saw a very slow process, frustrating many countries, especially the G77 bloc.

“They keep on talking but nobody wants to compromise. There is no effort to negotiate,” said Tess Vistro of Asia Pacific Forum on Women, Law and Development.

It will be a long and difficult fight for the next 5 days, especially for developing countries like the Philippines. There are battles to be fought to ensure that justice will be served for those who are most impacted by climate change. But right now, other countries like the United States clearly does not want to commit to anything concrete.

Another typhoon has caused devastation in the Philippines. Lives are again lost, crops are again damaged, homes are again swept away. 16,000 are displaced, 16 are dead.

The sympathy of world leaders are nothing but empty words if nothing concrete will come out of this week’s negotiations.There is no more time for dilly dallying and rhetoric. There is only time for decisions to be made. – Rappler.com

Renee Juliene Karunungan, 25, is the Communications Director and climate campaigner of Dakila. Dakila is an organization that has been working on climate justice since 2009. She is also a climate tracker for Adopt A Negotiator.