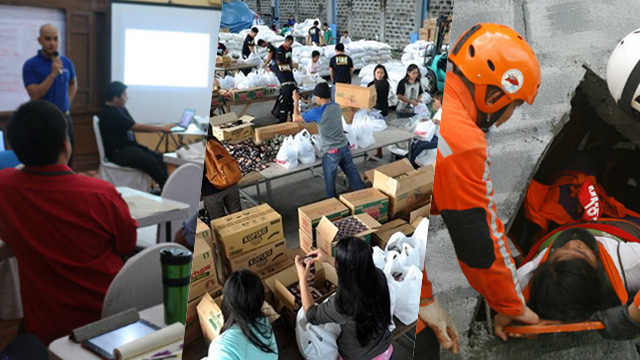 MANILA, Philippines – Are you aware of the climate and disaster management policies in the Philippines?

One of the most disaster-prone countries in the world, the Philippines has adopted policies in the management of calamities since the 1970s, after Typhoon Sening ravaged the country in October 1970.

Typhoon Sening (international codename Joan), with reported speed of up to 275 kph, held the record of being the strongest typhoon in the Philippines for 36 years (1970-2006). It highlighted the need to establish a contingency plan for these events and prompted former President Ferdinand Marcos to order the creation of a Disaster and Calamities Plan. This created the National Disaster Control Center.

In the same decade, the country was ravaged by Typhoon Titang (Kate) which has a record of 1,551 casualties in 1970 and Typhoon Openg (Vera) which affected nearly 3.5 million persons in 1973. (READ: Worst natural disasters in the Philippines)

Despite having the control center which was supposed to keep track of the aftermath of disasters, the National Disaster Control Center was abolished. Its function and personnel was transferred to the Office of Civil Defense (OCD) under the Letter of Implementation No. 19 in 1972.

Currently, the Philippines has two policies in place on disaster management and climate change adaptation, the Climate Change Act of 2009 and the Philippine Disaster Risk Reduction and Management Act of 2010.

A few days ago, the People’s Survival Fund was finally made accessible. It is supposed to finance long-term streams to address climate change. Call for project proposals was officially made by the Climate Change Commission last October 28.

Our current policies are around 30 years in the making. To know more, read the list below:

It created the National Disaster Coordinating Council, the focal organization for disaster management in the country at that time. It was headed by the Secretary of National Defense.

In terms of funding, the local council were to get their funds from their 2% unappropriate reserves. This came from the LGUs’ estimated revenue from regular sources for unforeseen expenditures.

From this, all local government units (LGUs) were to program funds to be used for disaster preparedness including organization of the local disaster councils – infrastructure, equipment and training of teams.

The LGC enabled the LGUs to access 5% of the estimated revenue from regular sources for unforeseen expenditures such as the occurrence of calamities. However, access is only possible if the President declares the area in a state of calamity.

Republic Act No. 8185 identified areas of expenditure such as relief, rehabilitation, reconstruction and other services with regards to calamities.

Rather than centralizing the decision-making process to the President, it gave the power to the local development council to monitor the use and disbursement of the local calamity fund.

With the current law seen to only focus on response, the government created the National Four Point Action Plan in 2005 to spearhead prevention and mitigation.

As the paradigm shifts from response to mitigation, Republic Act No. 10121, otherwise known as the Philippine Disaster Risk Reduction and Management Act, was enacted in 2010. (READ: RA 10121: The PH’s disaster management law is up for review)

RA No. 10121, is an act mandated to strengthen disaster management in the Philippines. It repealed PD No. 1566 and replaced the NDCC with the National Disaster Risk Reduction and Management Council (NDRRMC) as the focal body.

NDRRMC, now headed by the OCD as its implementing agency, coordinates with the regional, provincial and local DRRM councils.

As its focus is on prevention and mitigation, the local DRRM fund was established. LGUs are to set aside 5% of their estimated revenue from regular sources for their disaster councils. (Read: How do you use your local disaster funds?)

Of the local DRRM fund, 70% of which shall be used for pre-disaster measures. The rest shall be allocated as Quick Response Fund which serves as a stand-by fund for relief and recovery programs.

As the law turns 5 this year, the congressional oversight committee is conducting a sunset review of RA No. 10121.

Committed to the United Nations Conference of Environment and Development (UNCED), the Philippines developed Philippine Agenda 21, an adaptation of the outcome of the 1992 conference.

The Philippine Council for Sustainable Development was formed to coordinate and monitor the fulfillment of the commitments of the Philippines to the UNCED.

It laid down strategies to integrate sustainable development and identifies invention areas with corresponding platforms and plans.

In accordance with the UN Framework Convention on Climate Change and other international agreements, Republic Act No. 8749, also known as the Philippine Clean Air Act, was put into legislation in 1999.

To effectively carry out the law, RA No. 8749 tasked the Department of Environment and Natural Resources (DENR) to be the lead agency of the governing board.

The air quality management fund was created, to be sourced from the fines imposed and damages, as well as proceeds of licenses issued by the DENR under this act.

Violators of the standards are to be penalized as much as P100,000 per day for operators of facilities and as much as P6,000 and suspension of registration for motor vehicles.

In 2004, President Gloria Macapagal-Arroyo ordered Executive Order No. 320 to designate DENR as the National Authority for Clean Development Mechanisms.

It is an adaptation of the UNFCCC’s Clean Development Mechanism whereby projects implemented under are to prevent or absorb emitted GHGs.

As concern for the effects of climate change heightens, Arroyo formed the Philippine Task Force on Climate Change (PTFCC) to mitigate its impact and adapt to its effects under Administrative Order No. 171.

It aimed to conduct a rapid assessment on the impacts of climate change in the Philippines and make sure that establishments comply to air emission standards.

Seeing the need for legislation, Republic Act No. 9729 was enacted in 2009. It is also known as Climate Change Act of 2009. (READ: Philippine laws and decrees on Climate Change)

The law aims to mainstream climate change adaptation into government policy and establish a framework strategy. RA No. 9729 created the Climate Change Commission.

Government agencies and LGUs are to allocate from their annual appropriations enough funds for formulation, development and implementation of projects under this Act.

Amending the Climate Change Act, Republic Act No. 10174 established the People’s Survival Fund in 2012 to provide long-term financing to projects to address the problem of climate change.

Its P1-billion appropriation will be coming from the General Appropriations Act (GAA) and is suppletory to any annual appropriations allocated by LGUs for disaster risk reduction and climate change adaptation.

The law also created the People’s Survival Fund Board to deliberate projects and groups applying for funding assistance.

The board consists of the finance secretary, Vice Chairpersons of the CCC, budget secretary, director-general of National Economic and Development Authority, interior secretary, Philippine Commission on Women chairperson and representatives from the academe, scientific community, business and nongovernmental organizations.

Recognizing the close interrelation of DRR and CCA activities, RA No. 10174 mandated the integration of disaster risk reduction activities into climate change programs and initiatives.

This was created to enable the country’s transition towards a climate-resilient road to sustainable development.