Nov 1, 2015 2:07 AM PHT
Voltaire Tupaz
Facebook Twitter Copy URL
Copied
'What Eat Bulaga did in its Halloween Special was a mockery of and an affront to the image of the Muslim,' says ARMM Governor Mujiv Hataman 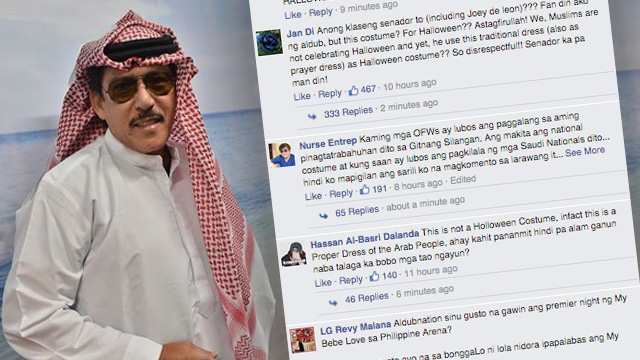 This offended the local government of the Autonomous Region in Muslim Mindanao (ARMM) and drew flak from some Facebook users.

“This display betrays an insensitivity by these hosts, as they equated the Muslim garb as a costume to be feared, in the way that zombies and ghouls are to be feared,” said ARMM governor Mujiv Hataman in a statement.

“What Eat Bulaga did in its Halloween Special was a mockery of and an affront to the image of the Muslim, apparently in the name of entertainment….On behalf of the Filipino Moro people, we demand that producers and hosts of the noontime show issue a public apology,” Hataman added.

Now on his 15th year………..#HalloweenPaMore

“This is not a Holloween costume. In fact this is a proper (attire) of the Arab people,” Hassan Al-Basri Dalanda stressed in another Facebook comment.

“Bakit sa Halloween mo yan sinuot Tito Sen? Ano akala mo sa aming Muslim, multo? (Why did you wear that on Halloween, Tito Sen (Sen Sotto)? What do you think of us, ghosts?)” Racy-carr Salahuddin Aquino said in a comment.

Other hosts of the show were dressed up as witches and other characters in horror and fantasy flicks.

Halloween is a yearly festive occasion with pagan origins that several countries observe on the eve of All Saints’ Day, a Christian holiday. (INFOGRAPHIC: Halloween around the world)

Hataman demanded an apology from the producers and hosts of the longest running noon-time variety show in the Philippines.

“We remind the hosts and the producers of the show of how Muslims are quite often discriminated against in our society, often stereotyped as troublemakers and terrorists,” said Hataman.

Hataman also reminded the hosts that the National Bureau of Investigation (NBI) was recently criticized by the Muslim community and other netizens over a controversial suspect sketch. (READ: #ENDdiscriminationNOW: Outrage over NBI’s ‘Muslim type’ profile)

“It was not too long ago that we raised our voices in indignation over the stereotypical presentation of the National Bureau of Investigation of a Zamboanga bombing suspect as being a ‘Muslim-type,'” Hataman said.

The NBI’s description sparked an online campaign initiated by members of the Muslim community on Facebook, calling for end to discrimination against Muslims. – Rappler.com