‘Marcos apologists, don’t tell us to move on’

Nov 1, 2015 3:55 PM PHT
Don Kevin Hapal
Facebook Twitter Copy URL
Copied
'I will not argue against what the Marcoses have done for Ilocos. Most of the progress they claim are true. But to use this as an argument on why the sins of the Marcoses in the past should be forgotten is invalid, and even insensitive.' “Move on din pag may time.”

We see these often on social media lately, usually with the Marcos’ loyalists endless narrative of utopia during Martial Law when no criminals roamed the street, goods were cheap and education was free – a complete contrast of what scholars, history books and thousands of witnesses have been passing down for decades.

It’s all lies, they tell us.

It’s all propaganda, they claim.

Yet many activists who opposed the dictator remain missing to this day. Is that also a lie? Decades have passed and we remain shackled by billion-peso worth of debts. Are these figures lies? In 2012, when the Congress implemented a law that seeks to help the victims of Martial Law, 75,000 people have come forward. Are they all black propagandists? (READ: ‘#AnimatED: Millennial, paano ka apektado ng martial law?‘) 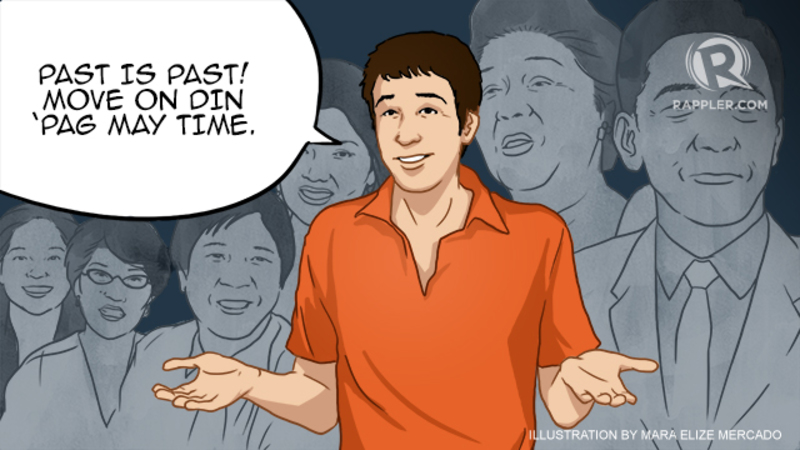 I am not even surprised that a majority of the loyalists come from the north, the Marcoses’ stronghold. Ilocos they say, owes its success to the Marcoses, and the dictator’s son who is now running for the vice presidency, ought to do the same for the whole country.

Bongbong is the country’s hope, they say.

The Marcos family do not owe anyone an apology, a presidential aspirant says.

I will not argue against what the Marcoses have done for Ilocos. Most of the progress they claim are true. But to use this as an argument on why the sins of the Marcoses in the past should be forgotten is invalid, and even insensitive. (READ: ‘Why Bongbong Marcos is good for Miriam Santiago‘ )

You cannot erase history, the same way you cannot bring back the dead.

Move on? We’re not talking about some childhood misunderstanding. This is not one of those shallow narratives of heartbreak you see on your teleseryes. You are asking people to move over decades-old feelings of anger, grief and pain.

Try explaining to those who suffered torture and abuse why the Marcoses do not owe them any apology. Try saying to the face of the families of those killed during the martial law that they should just forget about what happened for the sake of progress. Try explaining to wives who lost their husbands, parents who lost their children and children who lost their parents why they should just ‘move on’ when justice was never served and the culprits are still living in luxury and with so much power. (READ: ‘3 generations of Marcoses run for local posts in Ilocos Norte‘)

Move on? We’re not talking about some childhood misunderstanding. This is not one of those shallow narratives of heartbreak you see on your teleseryes. You are asking people to move over decades-old feelings of anger, grief and pain. You are telling families to move over a dark past that haunts them until this day. You trivialize their sufferings and make light of the atrocities they’ve seen. (READ: ‘Marcos victims to file suit vs Bongbong, Imelda‘)

The progress of the north that you claim to have now because of the Marcoses will not take back the pain that thousands of families have been through in the past. Those photos of high-tech wind mills and top-of-the-line infrastructures will not appease the grudge of the thousands who suffered in the hands of the dictator and his family. (READ: ‘#NeverAgain: Martial Law stories young people need to hear‘)

Answered the revered son to questions on whether he will apologize for corruption and human rights abuses during his father’s regime.

“Nobody wants that to happen. These are instances that have fallen through the cracks,” he says referring to those who were ‘run over, not helped and victimized in some way or another.’

Let his words above sink in and see how you’re asking people to forgive a man who would not even apologize and calls the death and torture of thousands as ‘instances that have fallen through the cracks.’ And you expect us to believe you when you say ‘past is past’?

It’s not an issue of the son inheriting the sins of the father.

It’s about not letting someone who favors impunity be in power, or in this case, get even more power.

So to Marcos loyalists I plead, go and worship your idol, but don’t go telling us to ‘move on’. – Rappler.com

Don Kevin Hapal is a graduate of Aquinas University of Legazpi and is a social media producer at Rappler. The views expressed here are his own.

This piece was first published on X, a platform for you to speak your mind. Share your story on Rappler’s X today.