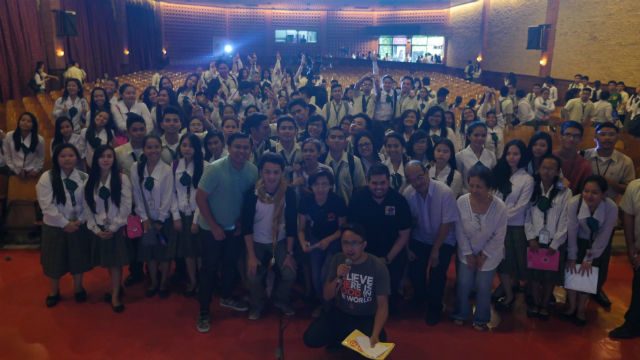 CEBU CITY, Philippines – “What’s at stake in the upcoming elections? Why should you care?”

These were the questions posted by Chay Hofileña, head of Rappler’s investigative desk, to college students as she opened MovePH’s “#PhVote Challenge: Cebu’s #TheLeaderIWant” on Friday, November 27.

The forum, held in partnership with the University of San Jose Recoletos, discussed how the youth can use social media to be responsible voters and bring into mainstream discussion the issues they think warrant national attention.

“Elections are not about numbers. They are about issues. Issues will determine where our country is headed,” Hofileña said.

She emphasized the need to go beyond personal politics and focus on the 6 major issues that elected officials will face in the coming years: corruption, climate change, poverty, peace in Mindanao, overseas Filipino workers (OFWs), and foreign policy.

“If you look at the horse race, you’re just looking at who’s leading the surveys. We need to go deeper and look at their stance on issues,” Hofileña added. According to government data, around 74% of the country’s 104 million population are below 39 years old, or considered youth. This means that some 20% of the Philippines’ 52 million registered voters are from the youth sector.

With this power in their hands, Hofileña asked the students for the leader they think the country deserves.

Some were quick to shout that the leaders they want should be able to discipline Filipinos, and willing to make sacrifices for the country.

Most students took their thoughts to social media.

#TheLeaderIWant is someone who does something to ignite a positive change throughout his country, instead of focusing on our past mistakes.

#TheLeaderIWant lastly, someone who will provide better medical, transportation & educational services to those who are in the rural areas.

#TheLeaderIWant has the grit & the compassion to make the lives of middle & lower classes easier in CONCRETE terms. #KamiNaman @MovePH

#TheLeaderIWant is someone who acknowledges the importance of youth sector in the development of the country #phvote pic.twitter.com/I7FFqMtyC1

"An honest election can open the gates for the leaders we want." #PHVote #theleaderiwant

Social media can be used to push for issues and advocacies, as shown by data from Pew Research that 66% of social media users are engaged in political activism. How the youth will use social media in the elections will greatly matter, Hofileña said.

“Good social media use is democracy at work. It’s like a virus that spreads online,” she concluded.

In a panel discussion by veteran investigative journalist Marites Vitug, LENTE’s Carlo Africa said the problem with the elections is that the public has lost trust in the power of voting.

“We don’t believe in the elections. If the electoral process is safeguarded, #TheLeaderIWant will come forward,” the law student said.

Vitug emphasized that the biggest problem “is ourselves.”

“Our greatest enemy is ourselves,” Vitug said, quoting a line from the movie, Heneral Luna.

After hearing the discussions on the issues at stake in the upcoming elections, the Cebuano participants expressed renewed hope for the country.

I move my country forward by making intelligent decisions &!be part of the youth Rizal describes as the hope of our nation  #TheLeaderIWant

Be the voice. It's your choice. Make a productive noise. #PHVOTE #TheLeaderIWant #MoveCebu @MovePH

Change will come if we want it. #theleaderiwant #PHVote

“We are looking for leaders who are aware of issues that aren’t given much attention,” Jamil Adiong of the Federation of Muslim Students Association added.

Hofileña challenged the participants, “How will you use social media in the next elections?”

The forum is organized as part of MovePH’s #PHVote Challenge series to raise awareness on responsible voting and spark discussions on national issues in time for the next elections. – Rappler.com