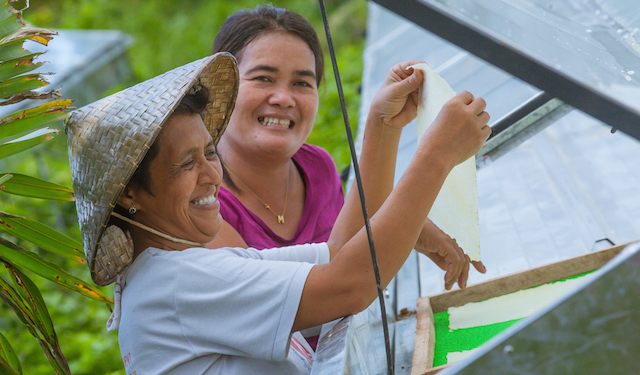 TACLOBAN, Philippines – The road to recovery was not easy for farmers and fisherfolk who lost almost everything they had when Super Typhoon Yolanda (Haiyan) struck on November 8, 2013.

Many of them were already hard-pressed to make ends meet even before the disaster and the will to rebuild their lives had almost faded.

“When the typhoon hit, our rice was almost ready and we were expecting a good harvest,” narrated Susan Gaspay of Burauen, Leyte.

“We lost everything – our ready-to-harvest rice, our stored seeds, and our rented tractor, not to mention our house.”

Fast-forward to two years later, Susan, along with hundreds of thousands of other farmers and fisherfolk are now role models of recovery in their communities.

Through the support of the Food and Agriculture Organization of the United Nations (FAO) in collaboration with the Philippine government, the concept “building back better” has become a reality for the agriculture and fisheries sector of the 4 severely affected regions of Western Visayas (Region VI), Central Visayas (Region VII), Eastern Visayas (Region VIII) and MIMAROPA (Region IV-B), including remote islands and upland indigenous communities. (READ: Yolanda rehab: Only 30% complete as 2016 begins)

This was made possible by the financial contributions of 14 international donor agencies, which reached nearly USD 40 million. (READ: Where are we after Yolanda?)

José Luis Fernández, FAO Representative in the Philippines, said: “This has been a unique emergency and rehabilitation response for FAO. It was the first Level 3 crisis declared within the organization, the highest category of emergency response.”

Fernandez added: “This involved fast-tracked operational procedures and the deployment of massive support from the FAO headquarters in Rome and the regional office in Bangkok. It was also one of the largest programs directly implemented by FAO in collaboration with the government.”

“A notable aspect of FAO’s Haiyan response is the mainstreaming of Accountability to Affected Populations (AAP) principles into all the elements of the programme,” said Cristina Graziani, FAO’s Emergency Operations Manager for the Typhoon Haiyan Program.

“This is a core tenet of FAO operations, which ensures the highest levels of program accountability in terms of participation, governance, transparency and addressing complaints by program beneficiaries,” Graziani explained.

According to Graziani: “AAP principles were integrated into the design, implementation and evaluation of projects, and communities were engaged since the beginning to ensure that both the process and what was being delivered addressed their needs, especially for the most vulnerable.”

Marife Jalbay, a member of the Abejao Farmers Association in Salcedo, Eastern Samar, recalls how their group was selected to undertake value-addition training through an assessment conducted by FAO. This has led them to expand their farm business by producing cassava chips.

With a larger role in the value chain, they are able to earn significantly higher returns compared to selling raw cassava to nearby markets, which fetched an average of Php 120 (USD 2.50) per barrel.  For that equivalent weight of cassava turned into chips, they now make Php 3 250 pesos (USD 69.60).

For Marcelina Calvez of Palompon, Leyte who lost her coconut trees to the typhoon, growing vegetables and other cash crops and learning how to integrate these in otherwise idle land has helped her gain a stable source of alternative livelihood.

This also included the introduction of climate-smart farming technologies, specifically sloping agricultural land technology (SALT) or contour farming, which would help them maximize the use of their limited farm area by utilizing land under coconut plantations or on hilly terrains.

“It’s hard work but it’s much better than our traditional way of farming. I’m now planting pineapples and I’m using the method I learnt from the training to plant madre de cacao as hedgerows because these plants are good for maintaining the fertility of the soil,” says Marcelina. 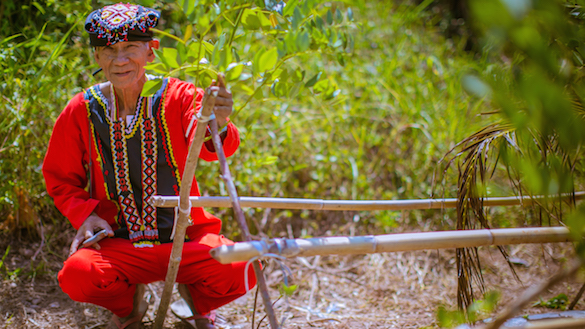 In many of the beneficiary communities, recovery was achieved by equipping farmers to establish and manage nurseries that will provide them with seeds and seedlings to rehabilitate their typhoon-damaged and disease-affected farms more efficiently.

“We usually buy seeds from the agricultural supply office here, but now we have the means to do it ourselves. This brings immense pride to our community,” said Laurence Palmes Barotac of Viejo, Iloilo.

Marife, Marcelina and Laurence are among the 230 000 farming and fishing households or over 1 million individuals who are now well on their way to recovery through the support of FAO and its partners.

Regional Executive Director of the Department of Agriculture (DA) Leo Cañeda said: “The cooperation we had with FAO has been there since the beginning. We were collaborating every step of the way especially in identifying the beneficiaries. The presence of FAO was very crucial in demonstrating to these people that help is there when it is needed.”

At the 35th World Food Day Celebration, Agriculture Secretary Proceso Alcala also highlighted the DA’s partnership with FAO in delivering support to farmers in the immediate aftermath of Yolanda and in ensuring the recovery and rehabilitation of the agriculture sector in affected areas.

From emergency to recovery, FAO in close collaboration with the DA and its attached agencies took every opportunity to not only replace what the typhoon had taken.

More importantly, the consensus and strong partnership placed affected communities and local governments in a good position to ensure longer-term food security, better agricultural livelihood opportunities, sustainable income streams that will lift them out of poverty and improved capacities to adapt to and mitigate future disasters.

“In commemoration of the second anniversary of Typhoon Haiyan, we pay tribute to all who made this effort a success – our donors and partners, the Government and the communities who welcomed this opportunity to build back better in spite of the challenges,” added FAO Representative José Luis Fernández.

Nikki Meru is the National Communications Expert of the Food and Agriculture Organization of the United Nations.