Victims of investment scam fight back 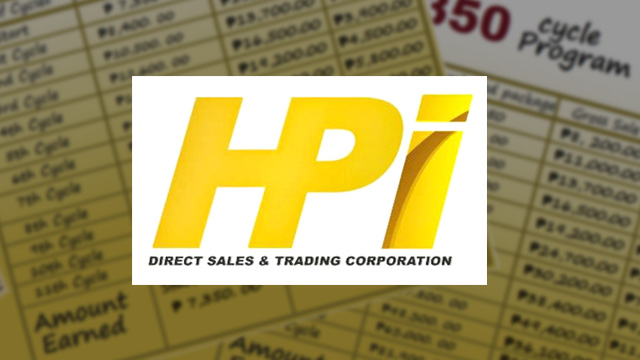 MANILA, Philippines – When Ariel* saw an offer on Facebook promising a 30%-profit in just two months, he had his doubts. But seeing how other people gained from the deal, he invested in the company. (READ: How to spot investment scams)

Ariel lost all the rest of his investments in the scam.

This is the same story shared by other alleged victims of HPI Direct Sales and Trading Corporation.

Despite not receiving his guaranteed profits, Ariel continued to attend meetings where HPI Direct Sales asked investors to be patient. They even promised them a good Christmas and New Year.

HPI Direct Sales uses a “Reward System” for its members who show their “loyalty and undying support to HPI products,” mostly cosmetics and wellness products. (READ: Not all that glitters is gold)

Terry* was an HPI franchisee and received the same plea for patience from HPI Direct Sales. The pressure from his members led him to continue asking for updates, but he never received them.

People began arriving at Terry’s house – many were crying while others threatened him. He said his hands were tied since he tried coursing their concerns to HPI Direct Sales and their chairman but did not receive a reply.

Terry estimated a total of more than 4,000 victims. Some invested hundreds of thousands of pesos. Terry’s family invested P10 million.

As a group, the victims filed estafa charges against Dela Cruz with the National Bureau of Investigation (NBI).

Ariel is not optimistic about his chances, but he’s not deterred by this. “Wala naman daw certainty na maibabalik ang pera namin, pero ang importante maisampa yung kaso (There’s no certainty our money will be returned, but the important thing is we’ve filed the case), ” he said.

Rappler attempted to contact HPI Direct Sales and Trading Corporation, but it could not be reached.

Investment scams are rife in the Philippines. Many entice people with the promise of high returns over a short period of time, as what happened to Ariel.

Companies like HPI Direct Sales combine networking with their plans. Members recruit other potential investors and are supposed to receive incentives when they raise money.

The Securities and Exchange Commission (SEC) had already flagged HPI Direct Sales in May 2015.

Along with Hyper Program International Direct sales, HPI Direct Sales and Trading Corporation was said to employ social media in inviting people to use their cosmetic and wellness products.

SEC did not allow these companies to “solicit investments from the public” and warned the public against these schemes.

*Interviewees asked their real names to be concealed for their protection.