LTFRB to rude cab driver, boss: Why should you keep franchise? 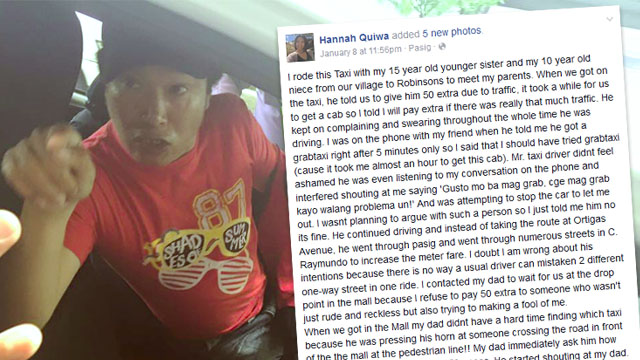 The driver, Rolando Camara, was caught in a series of photos yelling at his passengers. He was supposedly asking for an additional P50, aside from the fare.

Camara and the operator of Premium Taxi Premium Trans Corp were ordered to appear on January 20 at 9 am for the following violations:

Hannah Quiwa, the complainant, posted the incident as well as several photos on her Facebook page.

Quiwa said she was asked to pay an additional P50 because of the traffic, and she agreed to pay extra “if there was really that much traffic.” When they began the trip, she said the driver was yelling and cursing the entire time.

Upon arriving at the destination, Robinsons Galleria, Quiwa, her younger sister, and her niece, got off. Her father was waiting for the 3 at in the mall and asked about the fare and the additional P50.

This was when the driver began shouting and cursing at the group. Mall guards tried to interfere and told Camara to drive away.

On January 12, the LTFRB en banc also held a hearing for the case of Roger Catipay, another taxi driver. A video of him yelling at his passengers who refused to pay the additional fare he charged went viral on Facebook.

The order told Catipay and operator Ariel Gamboa to explain why they should not lose their franchise because of the following complaints:

Gamboa, the operator of Catipay’s taxi, and Joanne Garcia, the complainant in the case, were also at the hearing.

People with similar cases are encouraged to file complaints with the LTFRB. Complainants can send an email to complaint.ltfrb.gov.ph@gmail.com, fill up the form on the LTFRB’s website, or call 0921-4487777 or 426-2515. – Bea Orante/Rappler.com