‘Business of kindness’: Solution to poverty? 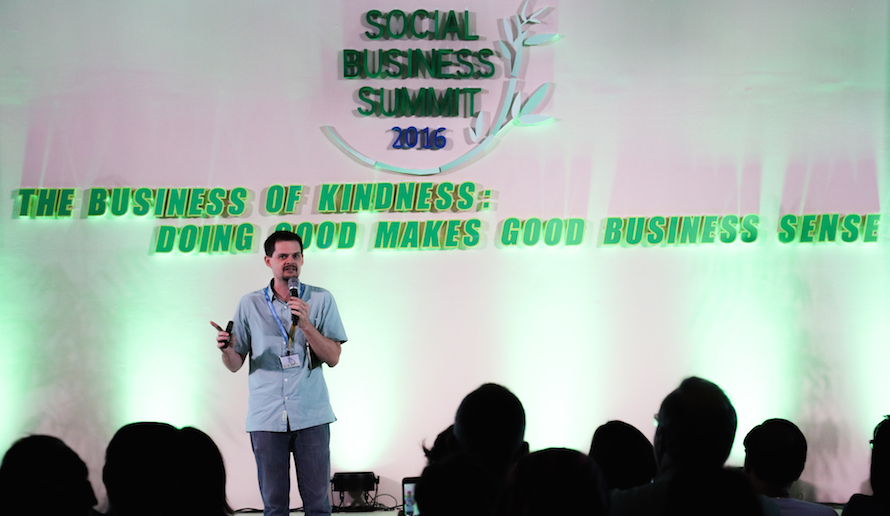 BULACAN, Philippines – Their employees are paid almost double the standard minimum wage. Their shops are closed every Sunday. There are no terminations in the company.

This has been dubbed “the business of kindness,” and it is a concept followed by the people behind local brand Human Nature. Their company, which specializes in all-natural cosmetics and personal care products, is considered one of the fastest-growing social enterprises in the Philippines.

Human Nature’s story was among those highlighted at the Social Business Summit 2016 held at the Gawad Kalinga (GK) Enchanted Farm Village in Angat, Bulacan from January 14 to 17.

Aside from hearing success stories of Filipino social entrepreneurs, the 500 or so participants from 13 countries also tackled new business ideas and strategies.

Dylan Wilk, a British national who co-founded Human Nature with Filipina wife Anna Meloto-Wilk, and Anna’s sister, Camille Meloto, believes that practicing the “business of kindness” can be an efficient way to uplift the lives of the poor.

He shared that their pro-poor and pro-environment business policies have had a positive impact on their employees.

These policies, Wilk said, are sustainable – and something they would continue, with their faith in the Filipino people.

For GK President Luis Oquiñena, the key step in achieving inclusive growth is to identify who are excluded – the poor. (READ: Social entrepreneurs and farmers for social change)

For a long time, the poor have been at the base of the social pyramid. According to Oquiñena, businesses must shift from mainstream policies in order to flip the pyramid. (READ: Social entrepreneurship: Ending poverty from the bottom up)

Oquiñena challenged the summit’s delegates to help address poverty, describing them as “hybrids of social transformation.”

“We just don’t conform to the minimum wage. Pay more, give more. I don’t think it will make you poorer when you share your profits,” he said.

Aside from training and guiding social enterprises, GK has started to invest in future social entrepreneurs.

One of the major achievements of the Social Business Summit 2014 was the School for Experiential and Entrepreneurial Development (SEED).

Considered the first-ever educational institution focused on social business, SEED proved to be a game-changer.

The SEED students, who number less than 100, are financed by the GK community and partner organizations and corporations. Aside from having a specialized curriculum, the scholars undergo internships and special training in social entrepreneurship.

Staying committed to its culture of “bayanihan”, GK also presented another fruit of the previous business summit – “Barangay Walang Iwanan.”

Inspired by the smallest local government unit, “Barangay Walang Iwanan” is a platform of a supply chain ecosystem.

For the years to come, Oquiñena hopes more Filipino youth will be encouraged to become social entrepreneurs. People working collectively, he said, would help solve the problem of poverty. – Rappler.com

Janica Mae Regalo is a Rappler intern. She is currently a 4th year Mass Communication student at San Pablo Colleges.