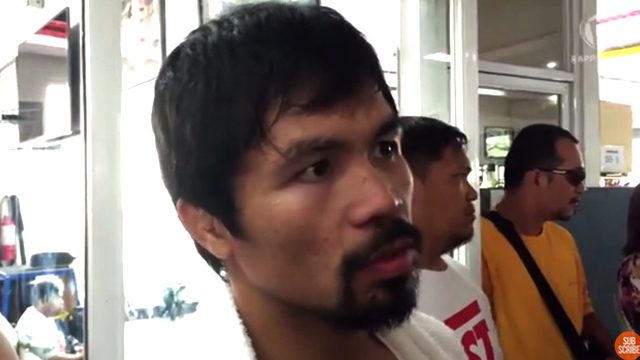 Facebook Twitter Copy URL
Copied
Despite his apology, Pacquiao clarifies he will not compromise his faith just to get votes

In a video he released on his Facebook page, Pacquiao said: “I’m sorry for hurting people by comparing homosexuals to animals. Please forgive me for those I’ve hurt.”

I'm sorry for hurting people by comparing homosexuals to animals. Please forgive me for those I've hurt. I still stand on my belief that I'm against same sex marriage because of what the Bible says, but I'm not condemning LGBT. I love you all with the love of the Lord. God Bless you all and I'm praying for you.

In another interview with Rappler, Pacquiao clarified his statement: “I am not condemning them (gays), just the act. I do not agree with them having to marry.”

This earned him the ire of the LGBT community and gender advocates. Local celebrities like Lea Salonga, Vice Ganda, and Aiza Seguerra condemned Pacquiao, and blogger Perez Hilton even wrote a response on his website. (READ: The ‘sub-humanity’ of Manny Pacquiao)

Senatorial bets from the slate of the Grace Poe-Francis Escudero tandem also criticized Pacquiao, who is gunning for a Senate seat.

Walden Bello, another senatorial candidate, posted on his Facebook page, “Manny Pacquiao is a great boxer but his views on gender equality belong to the distant past.”

However, he reiterated he still held his stand saying, “I still stand on my belief that I’m against same-sex marriage because of what the Bible says, but I’m not condemning LGBT.”

In the Rappler interview, he said he remained steadfast in his beliefs. “It doesn’t matter if people get angry at me, as long as I do not anger God,” he added.

Pacquiao is a devout Christian who has frequently mentioned the degree of influence his religious beliefs has had on his political decisions.

As Sarangani Representative, he argued against the passage of the Reproductive Health Law.

He also previously dealt with the criticism springing from comments that advocates perceived as homophobic.

Pacquiao supposedly quoted Leviticus 20:13: “If a man lies with a man as one lies with a woman, both of them have done what is detestable. They must be put to death; their blood will be on their own heads.” (READ: Gays slam ‘homophobic’ Pacquiao)

Is there hope for a change of mind in the future? Probably not.

Pacquiao added in the interview, “I will not compromise my belief, my relationship with the Lord, just to have their votes.” – with reports from Bea Orante and Ryan Songalia/Rappler.com