#EDSA30: Should the Marcoses be held accountable? 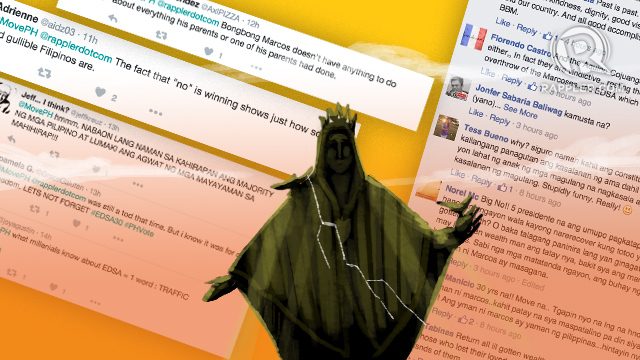 Facebook Twitter Copy URL
Copied
While many revisit EDSA to commemorate People Power 1, others say it is time to move on

MANILA, Philippines – Time to move on.

For the 30th anniversary of the EDSA I, the uprising that deposed the dictator in February 1986, many netizens said they are tired of hearing about People Power and just want to move on from it.

They also expressed resentment and disappointment at its aftermath. Others, like Dennis Dawal, even go so far as to say: “People Power was a grave mistake. It did not give power to the people but to the oligarchs.”

The anger at the return of the oligarchs and political families is the common thread among those who are frustrated at the current state of the Philippines.

Mother Mary John Mananzan, former president of St. Scholastica’s College and one of the outspoken figures from EDSA I, agreed with Andrej Mazahery who previously said there was no real democracy in the Philippines after 1986. (READ: Sr Mary John Mananzan reacts to youth’s messages on People Power)

She explained: “The basis is that you cannot have a democracy unless the great majority of the people have all their basic necessities fulfilled. That for me is the material basis of democracy, and that we don’t have.”

Former justice secretary Agnes Devanadera observed how there was an overwhelming sense of dismay from the public.

“It’s very sad because not all countries have memories of a nonviolent revolution to always look up to and always remember and guide us.

Mananzan observed that, despite some “trivial” insights, “some of them are quite astute in their thinking.”

The idea that the past should no longer influence the present also translated to the public opinion on alleged crimes under the Marcos regime.

On social media, netizens agree that Senator Bongbong Marcos, who is running for vice president, should not be held accountable for his family’s ill-gotten wealth.

The poll on MovePH’s Twitter shows 59% of netizens saying Bongbong should not have to be held accountable for the Marcoses’ ill-gotten wealth, and another 41% saying he should. (READ: People Power veterans to Bongbong: Wala ka bang puso?)

Replies to the poll give an idea of why Filipinos want the younger Marcos to take responsibility.

@moveph Yes, because the wealth has become his inheritance. #EDSA30

@MovePH @rapplerdotcom #EDSA30 #PHVote If he benefits from the loot; claims it as his or his family’s, then he is complicit.

The divide on Facebook is greater with more than 2,000 people voting “no” and more than 700 voting “yes.”

Should Bongbong Marcos be held accountable for the Marcoses’ ill-gotten wealth? Why? #EDSA30 #PHVote

One Facebook user, Earl Daniel Urbiztondo, commented: “Bongbong Marcos was old enough to know that there was something wrong. Yet he decided to turn a blind eye and fall under the illusion that his parents were the greatest.”

Another, Dangilo Mangila Adiao, wrote: “He’s not responsible and accountable for what his father did, whether they are good or bad. He has his own agenda like everyone else.”

Bongbong was 26 when his father was deposed and forced into exile in Guam.

Banker Michael De Guzman, who testified before Congress in 1989 and 1997, said Bongbong had the task of coordinating both with the family’s contact in Credit Suisse and De Guzman. (READ: What Bongbong Marcos knew of Swiss deposits)

@MovePH Of course not. If it’s really “ill-gotten”, then he’s not responsible for it anymore.

@MovePH @rapplerdotcom why should he be? He is not his father’s, or even mother’s shadow.

Although the 1986 People Power uprising is polarizing, for many Filipinos, the country’s history before, during, and after EDSA I is not simply black or white.

For all the gains from EDSA I, there have also been perceived setbacks. Many of the comments say that while it was right to depose Marcos, they were saddened by the current state of the country.

@MovePH #EDSA30 The time we fought for our freedom from the dictator, but lost our dignity by letting the landgrabbers govern our country.

However, for Devanadera, perceptions of EDSA I are a matter of reality versus expectations.

“We still have (the gains from EDSA I), except that our expectations after 30 years that everything would be changed are not met.”

But former senator Aquilino “Nene” Pimentel Jr said the negative comments are part of the democratic freedoms Filipinos fought for during EDSA I. (WATCH: Nene Pimentel reacts to youth’s views on People Power)

“It’s good, in the sense that we should not only tend to remember EDSA by its successes, but also by the defects that accompanied the outcomes of the revolution,” he added.

Under the Marcos regime, which EDSA 1 ousted, about 70,000 people were detained, at least 34,000 were tortured, and 3,240 were killed, according to Amnesty International (AI). (READ: Worse than death: Torture methods during martial law) – Rappler.com