During disasters, help is now just one text message away 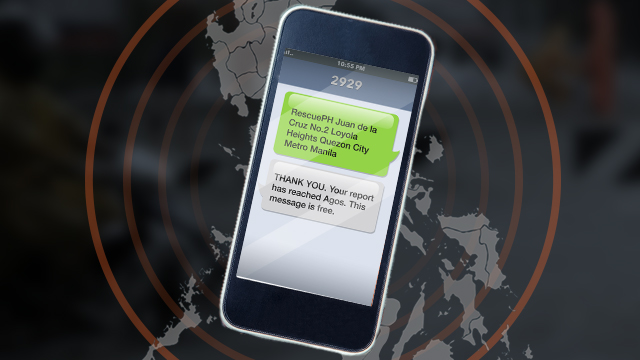 MANILA, Philippines – While information is no longer a problem in the age of social media, getting timely and actionable information from those affected by disasters is still one of the biggest challenges that needs to be addressed.

This is why it’s important to take advantage of all means of communication, whether online or offline.

Realizing that Internet connectivity is still a problem, especially in far-flung areas, Agos, Rappler’s online disaster platform, thought of a way to help even those without access to the Internet – through SMS.

During the Office of Civil Defense’s disaster communication summit in Baguio on Thursday, March 3, Rappler, in partnership with Smart Telecommunications (Smart) and Chikka Philippines, launched the Agos SMS service.

Now whenever a disaster strikes, Smart, Talk & Text, and Sun subscribers all over the country can send reports such as rescue, search, or relief assistance to Agos. 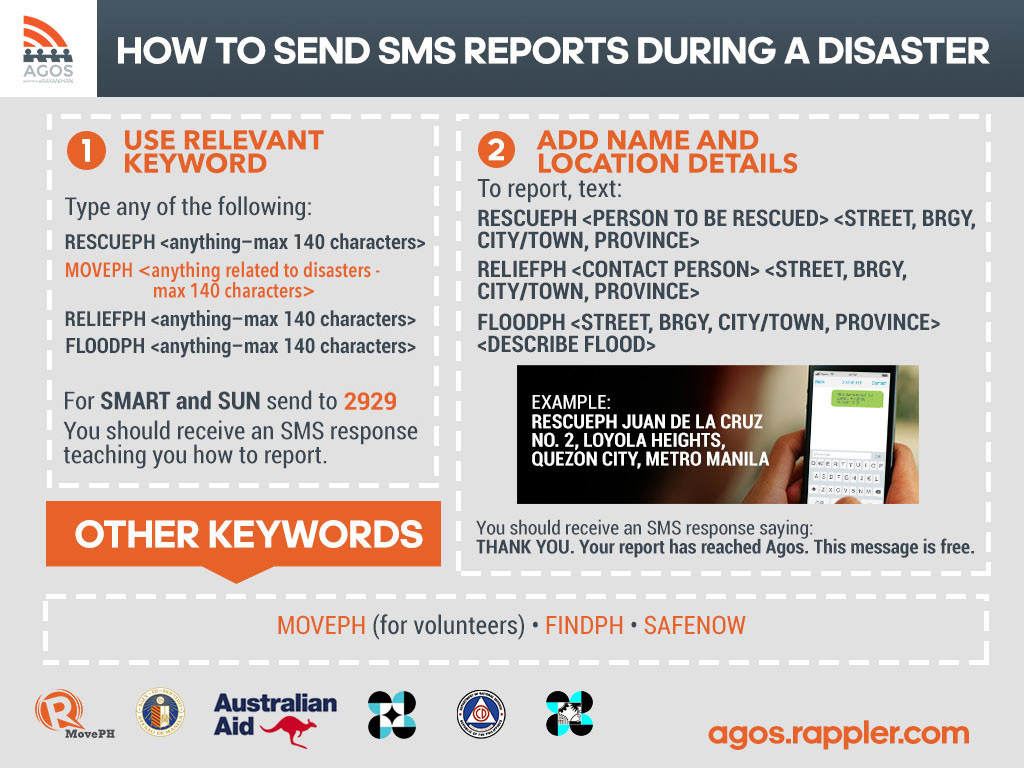 Subscribers can send at least 3 free text messages per day, while succeeding messages will be charged P2.50.

As part of the country’s Emergency Telecommunications Cluster during disasters, the Agos team monitors, verifies, and relays these reports to concerned government agencies.

The Agos system uses Seerium, a software developed by Seer Technologies, one of the Agos tech partners, to process and automatically handle text messages.

Agos is also in the process of integrating SMS in the platform for Globe Telecom subscribers. Reports will be sent to 2467 (AGOS). 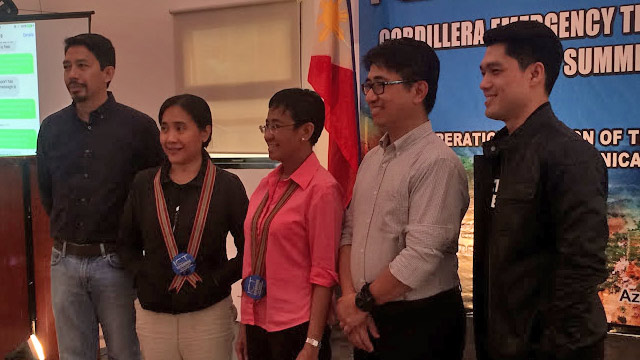 This service is for those in far-flung areas who do not have smartphones or access to the Internet.

In 2015, only 30% of Filipinos had smartphones, according to Darwin Flores, Smart’s vice president for community partnerships.

“It increased this year, it’s already 40%. But 60% of cellphone users still use the SMS. We know that those with low-tech phones are the most vulnerable because they do not have the capacity to buy smartphones,” Flores said in a mix of English and Filipino.

(What’s the use of this great technology if the majority, who are part of the vulnerable sector, could not report?)

In 2015, Agos merged with Ateneo’s e-Bayanihan to build a single, sustainable platform that will enable multiple stakeholders to adopt common workflows before, during, and after disasters, one that will reach more communities on the ground and online. (READ: Ateneo, Rappler collaborate to address disaster information management)

Now known as Agos, powered by e-Bayanihan, the two are planning to launch a mobile app version of Agos, which the public can use during disasters.

“People can now report via text. Almost all Filipinos have cellphones. It is rare to find a Filipino who doesn’t know how to text. What we are asking from everyone is to help us communicate, spread the word, and teach people to use the syntax,” Rupert Ambil, MovePH executive director said.

“Teach them and encourage them to become disaster [preparedness] advocates,” Ambil added.

Agos, which was launched by Rappler in 2013, is supported by the Australian Government and a number of other partner groups. Join the Agos community on Facebook. – Rappler.com