#PHVote: How accessible are the 2016 elections to PWDs?

Mar 12, 2016 1:15 PM PHT
Bea Orante
Facebook Twitter Copy URL
Copied
As the Comelec gears up for the elections, some groups are wondering: will they be able to vote? 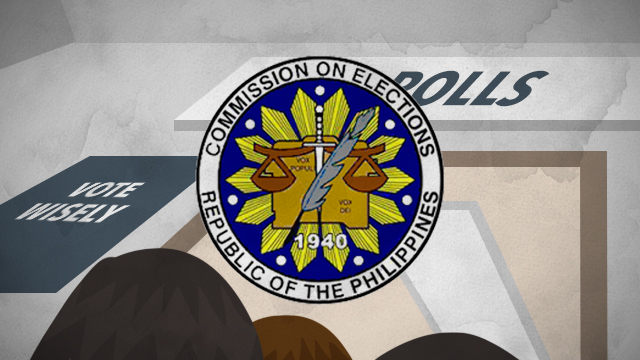 MANILA, Philippines – The May 9 elections are nearing and preparations are on overdrive. In theory, everyone should be able to participate, and it is the Commission on Elections’ (Comelec) task to make sure that happens.

The preparations include special provisions for persons with disabilities (PWD), senior citizens, and pregnant women.

So what exactly are they entitled to?

In general, the Commission on Elections (Comelec) has to ensure everyone has an equal chance of getting to the polling place, filling out the ballots, and submitting them.

For accessible polling places (APP) to pass Comelec standards, they should be located on the ground level – preferably near the entrance – and without physical barriers. 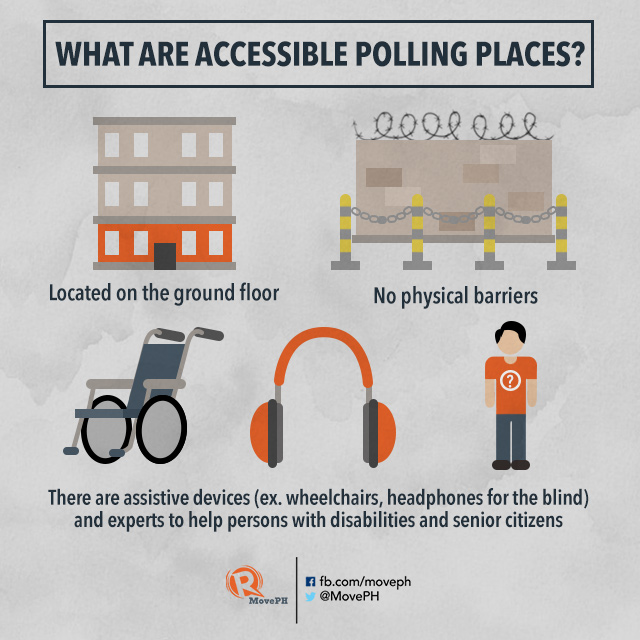 Experts and assistive devices, like headphones for the visually-impaired, and wheelchairs, should be on hand to help PWDs and senior citizens.

When PWDs, senior citizens, detainees, and pregnant women get to the polling place, they are allowed to use express lanes so they can vote as soon as they arrive. 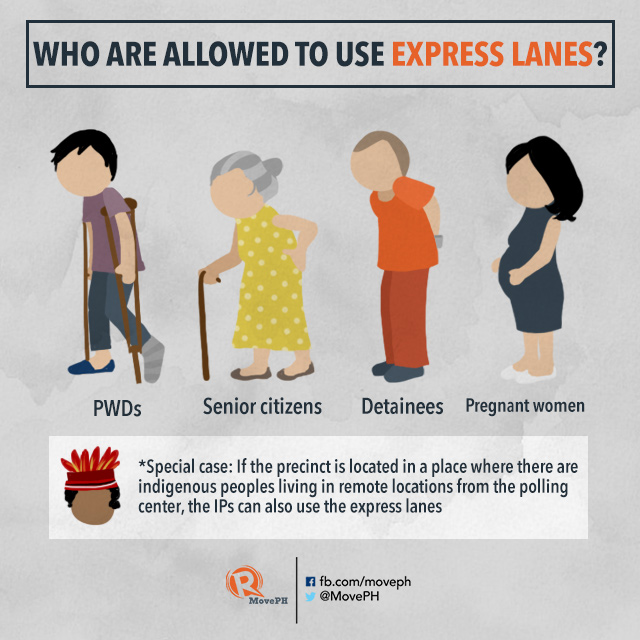 However, for areas where there are indigenous peoples (IPs) from remote locations, IPs can also use the express lane.

PWDs and the illiterate can request for assistance in preparing the ballot. However, only the following are allowed to assist:

Everyone involved in the elections, including field officers, BEIs, and accredited citizens’ arms, should undergo sensitivity training with the Comelec to familiarize themselves with the needs of PWDs and senior citizens.

PWDs and the illiterate must have informed the Office of the Election Officer (OEO) in their city or municipality to avail of the APPs, according to Comelec Resolution No. 10057, which provides general instructions for the 2016 elections.

Comelec Chairman Andres Bautista, however, said they were “exploring other options” to make voting easier for PWDs who were not registered for the special provisions.

The instructions for 2016 are updates of previous laws like Republic Act No. 10366 approved in 2013, which established the parameters of APPs.

Ramon Apilado, the public relations officer of Tahanang Walang Hagdanan (House without Stairs), said updates were necessary since there were always elements that were lacking or left unimplemented.

Tahanang Walang Hagdanan (TWH) is a social enterprise which provides work, skills training, and other services to PWDs.

The PWDs of TWH told Apilado they experienced accessibility issues during the 2013 elections and the voter registration period. (READ: Were the 2013 polls PWD-friendly?)

(Even when they were on the ground floor, there were still stairs. Let’s say there were two or 3 steps, so it was still slow. In other words, it was still inaccessible.)

Accessibility was also a problem during voter registration, which limited the number of registered PWD voters.

In Rizal province, which Apilado described as a “center for PWDs” because of TWH’s location, there are 2,769 registered PWD voters. Cainta City has 815 registered voters, while the city of Antipolo has 640.

The APPs’ real test, however, is yet to come – designing accessible polling places are one thing, but implementation is another animal altogether.

Apilado said there were a lot of rules governing PWD mobility, but it was still a question of whether plans were implemented.

Equal and open access to the elections is emphasized in the country’s laws. According to the Omnibus Election Code “it shall be the obligation of every citizen qualified to vote to register and cast his vote.”

By law, the government should make sure everyone, including PWDs and senior citizens, can participate “without discrimination or restrictions.”

The Comelec also specified that APPs have to follow a universal design, meaning designs have to be usable for everyone without modifications.

Apilado, however, observed this was rarely followed, both for APPs and other buildings.

For PWDs and senior citizens, the value of being able to reach the polling place and cast their votes goes beyond elections; it also reflects whether they’re seen as a part of society.