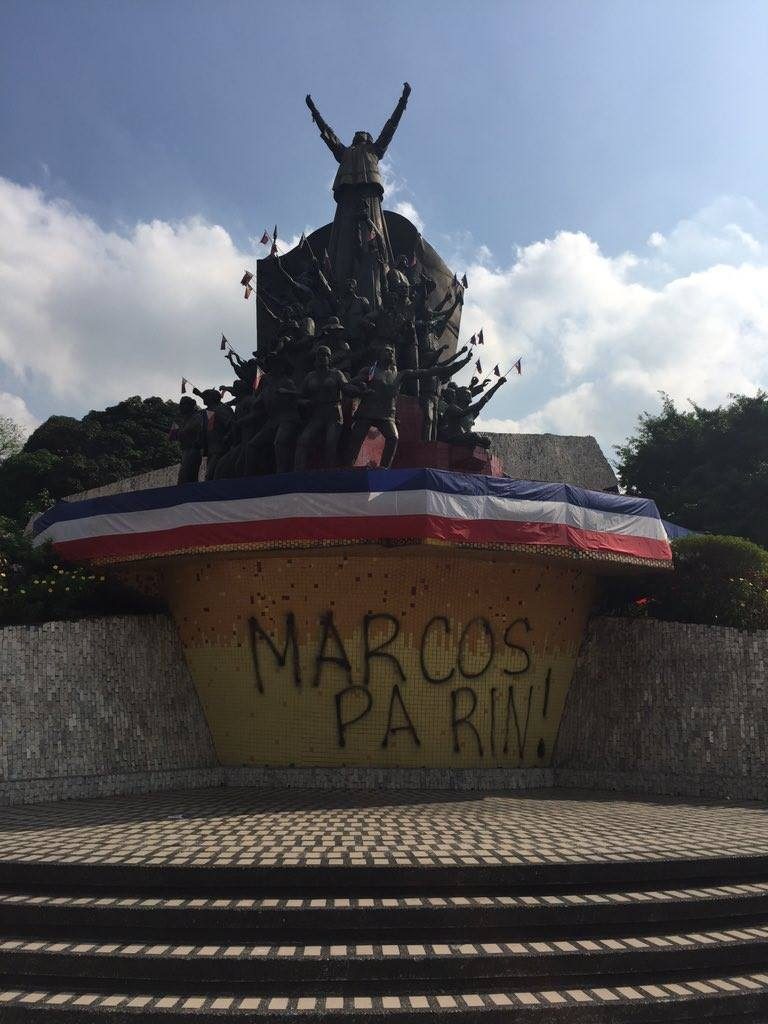 MANILA, Philippines – For people who frequently travel along EDSA and pass through White Plains Avenue, there was something different.

The People Power Monument on the corner of EDSA and White Plains Avenue bore the message “Marcos pa rin!” (Still for Marcos!) on its base, referring to the 80s slogan of the supporters of ousted President Ferdinand Marcos.

The people behind the graffiti have yet to be identified.

The People Power Monument was built in 1993 by award-winning sculptor Ed Castrillo. It commemorates the people’s uprising that toppled the strongman in February 1986.

Several netizens noted the irony in the situation, saying the act would be punished under the Marcos regime, which the graffiti supposedly supports.

The EDSA monument was vandalized with “Marcon pa rin!” this morning. It’s scary and saddening how strong Marcos apologism is getting.

“Marcos pa rin!”
The irony of supporting someone who would have made… https://t.co/ruqGqdGaYU

However, the vice presidential bet’s supporters said it could not be the work of Marcos loyalists.

“Obviously, this is propaganda against Marcos supporters,” wrote netizen Rbee Ablan on MovePH’s Facebook post. She added that people on Marcos’ side were “educated” so they would not vandalize the monument.

Former President Marcos’ supporters have rallied behind his son, who is one of the popular candidates in the 2016 vice presidential race.

Vandals have defaced the People Power monument along EDSA. Photo by JR Santiago

Martial law and the Marcos administration’s legacy have become key issues in the upcoming elections, dividing many Filipinos into either pro- or anti-Marcos camps.

Bongbong Marcos has consistently defended his father’s administration and refused to apologize for what happened during martial law. Despite efforts from activists and groups to counter his actions, his stock continues to rise, according to the surveys.

The February 15 to 20 Pulse Asia survey showed Marcos second to Senator Francis Escudero, but only by 3 percentage points. – Rappler.com