WATCH: Al Gore on solutions to the climate crisis 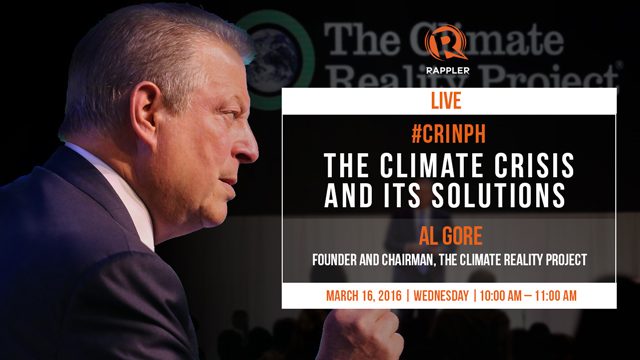 MANILA, Philippines – Ten years ago, An Inconvenient Truth introduced millions of people to the reality of the climate crisis and inspired millions more to make a difference in their communities.

In the film, Climate Reality Founder and Chairman Al Gore lent his voice to scientific facts on global warming, warning about its catastrophic effects if the amount of man-made greenhouse gases like carbon dioxide is not significantly cut. (READ: Al Gore visits Yolanda ‘ground zero’)

Since the 2006 launch of his award-winning film An Inconvenient Truth, global awareness efforts on the climate crisis have gone a long way. (READ: Coal-minded leaders left behind by green energy growth – Al Gore)

Watch the recording of the presentation that sparked a global movement as Gore gives his speech on climate crisis and its solutions at the Climate Reality Leadership Corps training (#CRinPH) last Wednesday, March 14, in Manila. – Rappler.com